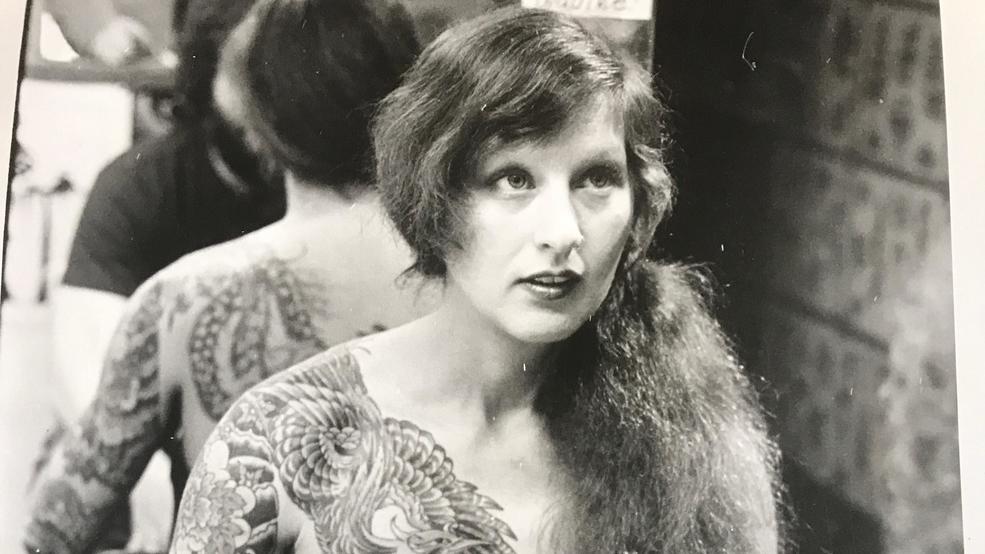 Seattle&rsquo;s First Lady of Tattoo reflects on nearly half a century of work

When visitors first enter Madame Lazonga’s Tattoo shop on Western Ave., directly below the Pike Place Market bridge, their eyes are drawn quickly upward to an almost two-foot tall likeness of the Madame.

Striking in similarity, the red-haired marionette hangs on her strings above the front desk. An identical depiction - down to the tattoos painted on her small arms - she watches the store from behind large cat-eye glasses.

Vyvyn “Madame” Lazonga, now 71, is still undoubtedly recognizable, looking only slightly older than the doll, her hair now varies in shades of pink.

In a time when women empowerment is on the forefront of conversation, Vyvyn, known as Seattle’s First Lady of Tattoo, has been empowering herself through her body and her business for 46 years.

Lazonga has won 16 awards within the industry, from her first in 1978 as Best Tattooed Female to her most recent in 2017 winning the Tattoo Industry Icon Award.

Born in Seattle in 1947, Lazonga was a child artist, drawing as soon as her hand could hold a pencil. But it wasn’t until the summer of 1972 that she took her first steps through the doors of the Seattle Tattoo Emporium and into the industry.

“That was the summer I discovered a tattoo shop that had just opened in Seattle,” she said. “And the guy that ran the shop, his name was Danny Danzl.”

C.J. ‘Danny’ Danzl, a World War II Veteran whose laryngectomy forced him to speak out of a small speaker in his throat, was an established artist and quick to become Lazonga's mentor, showing her how to tattoo in exchange for help tidying up around the shop.

“The tattoo profession was controlled mostly by men,” she said. “Back then I was young, I was an anomaly. I was in the right place at the right time.”

Lazonga quickly gained notoriety as a young woman with beautiful tattoos who could create tattoos just as beautiful of her own.

After eight years of working with Danzl, she left to work in other artists shops or privately, off and on.

In 1979, she opened one of the first female owned and operated shops which at the time was “pretty much unheard of”. The small shop sat on Olive Way far from the conventional tattoo hot-spot ‘Skid Road’ in Pioneer Square.

“That was the first time tattooing had ever been taken off of ‘Skid Road’,” Lazonga said. “And it opened the way for others to take suit. But I didn’t know what I was doing.”

It took four decades of navigating on her own for her to learn a lot of tough lessons, she said, such as surrounding yourself with the right group of artists and learning to say ‘no’ to potential clients, but even today she doesn’t know it all.

“I still get frustrated,” she said. “Because you’re not working with anything that really has a defined stability. It’s organic. You’re putting your heart and soul in it and when the person walks out the door, it goes away.”

The Madame has taken the task of being a tattoo artist to new heights, past “ego-driven” body beautification, to the importance of covering up post-mastectomy scars for woman who have battled breast cancer. A few clients requesting cover-ups in the ‘80s grew to more and more over the years.

From constructivism to abstract, her art takes on many different aspects. A majority derived from ‘Yakuza’, a traditional style of Japanese tattooing. The pieces are always a collaboration between the Madame and the client.

“It doesn’t do anyone any good if the tattoo artist hates what they’re doing,” she said as she applied a base of black ink to a returning client’s arm.

Sessions can last up to four hours and depending on the tattoo, a design could require as many as seven sessions.

Nearly a half a century of tattooing has not gone without its physical toll. Vyvyn’s tattooing arm has grown more and more painful over the years of constant artistry, but it hasn’t stopped her yet.

“It’s so intense and when you’re working on people it’s like doing surgery,” she said. “It’s pretty physically demanding, it doesn’t look like it is, but it is.”

Today, Madame Lazonga takes only scheduled appointments with a select clientele, not only based on if she is the right artist for them, but if they are the right client for her.

Now, she watches her clients walk out of her studio one session at a time from behind her large cat-eye glasses. Every piece of art she creates coming to life and venturing out into streets of Seattle.