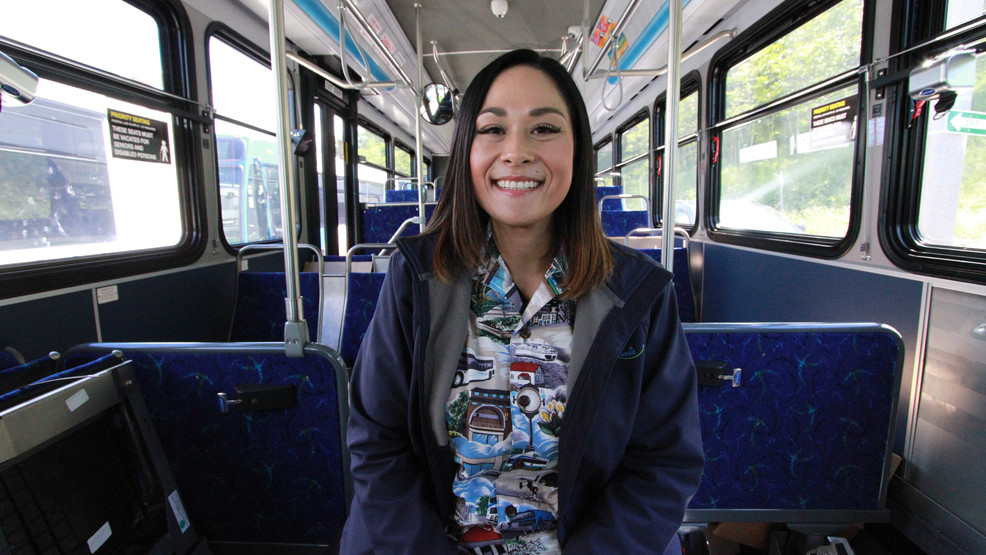 Just one and a half years ago, Tiffany Underwood decided to change careers and become a bus driver for Community Transit — even though she had never driven a vehicle of that size before.

Today, she couldn't see it any other way.

Underwood used to be in an office for about 10 hours a day but wanted something different — to be out in the world.

"I wanted to just...get out on the road and just kind of explore, and I love it," the 35-year-old said. "I get to meet new people every day, my office is mobile, and I can be anywhere...at any time."

But these last few months have been unlike any other — Underwood has been driving doctors, nurses, grocery store employees and other essential workers to and from work during the coronavirus pandemic, and even patients to the hospital. She has had more than 10 of her colleagues test positive for COVID-19, and one die from it. She's put in extra hours when routes need to be covered and sometimes work 14-hour days.

All of the above is why Underwood was chosen to be celebrated in Amazon Prime Video's original docuseries, "Regular Heroes." She's one of three people featured in episode six, which became available Friday, June 19.

Through eight episodes, "Regular Heroes" (which premiered in May) highlights the contributions and sacrifices of individuals around the nation who have gone to the next level to support their communities.

This crisis has affected many aspects of Underwood's job — like wearing a mask constantly and passengers only boarding through the rear door, both of which impacted that one-on-one connection she typically has with her customers, she said. But there have also been rewards. Many of her customers work at hospitals and grocery stores she passes on her routes, and, for some, Community Transit is their only form of transportation.

"They're thanking me that I'm still coming to work and doing my job because it's essential for them," Underwood said. "Just knowing that without me as a driver, it would be a lot harder for them to get to work - it just kind of gives me a little extra fulfillment."

They talk to her about their day, and the commute to and from work allows them to decompress and take time for themselves.

"It makes me feel happy knowing that I can be a part of someone's day. To be able to drive them and take that stress away from them, being on the road, because working so hard all day in a frontline job, I can imagine what that's like and then have to take on a long commute afterward? It's really awesome that I'm able to do that for them, like let me drive for you and you can just sit there and relax," she said.

Being chosen for "Regular Heroes" was fun from start to finish for Underwood. The experience as a whole was "amazing" for both her and her 14-year-old daughter, Kipani. Neither of them had ever done anything like it before.

"I feel so honored to be a part of something so big [like an Amazon show]," she said. "And just so other people can see that transportation is essential and give a behind the scenes of what it's like to be a driver."

So far, "Regular Heroes" has showcased an emergency room physician, art supplier, animal rescue worker, drive-in theater owner, among others. Underwood is featured alongside Daniel Hayden, who helps run a family-farm in Whitesville, Kentucky and Francisco Gomez, who's an emergency vehicle technician in San Antonio, Texas.

Each episode of "Regular Heroes" also features special guests like Alicia Keys, Kevin Hart, Nick Jonas and Kelly Rowland, who give back to these heroes in some way. Country music star Brad Paisley was the celebrity who surprised Underwood and her daughter over FaceTime. He told her, "you really are a hero."

"What a shock! I had no idea I was going to get that phone call," Underwood said, also mentioning the surprises he had for her still make her emotional when talking about them today.

We don't want to spoil how he gave back to her — but it's quite the tear-jerker, and you'll just have to watch to see for yourself. And, for other essential workers out there, Underwood wants you to know that "someone is out there rooting for you."

"Be safe. Take this one day at a time...the pandemic is not going to last forever. Know that your job is essential, whatever it is," she said. "It's amazing what we are all doing."

You can watch Underwood's episode here. New episodes of "Regular Heroes" will be available Fridays through July 3 and can be found on Amazon Prime Video.