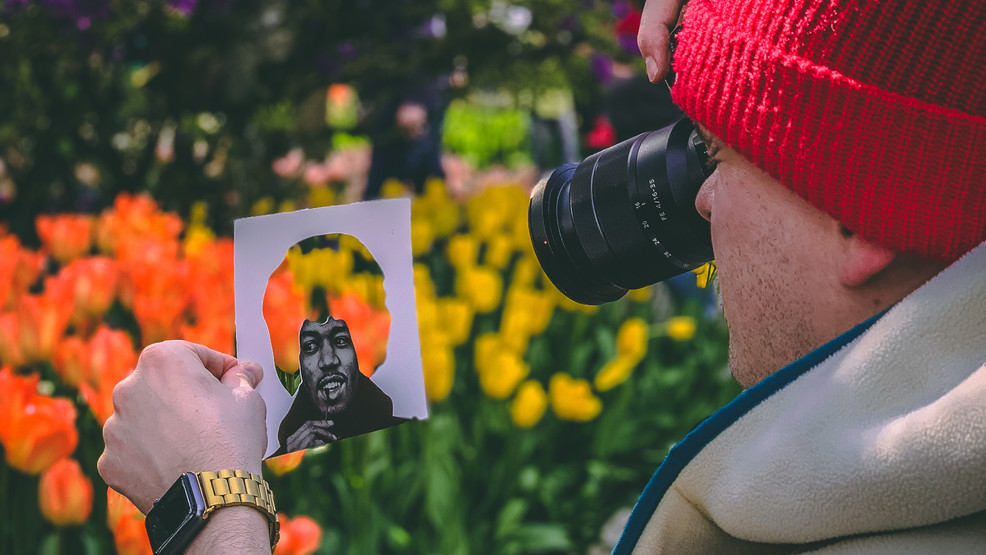 Rudy Willingham compares how he creates art to looking up at the sky and finding images in the clouds.

His cutouts can be found around Seattle, an art form Willingham has been doing for about two years now that has garnered him millions of followers across various social media platforms. He wears many hats: street artist, music producer, advertising creative — basically, as Willingham puts it, "anything creative."

Willingham uses his art to "make people smile" in a world often overflowing with negativity.

"Everything feels like the sky is falling," he said. "It's like therapy. It's important for me to create stuff that's brightening up people's days."

One of the ways he does that is by leaving easter eggs around Seattle for people to discover with his signature cutout stickers — like creating "Finding Nemo" with an orange construction reflector warning light, Spider-Man casting a web using a broken window or the floating house scene from "Up" using a bunch of berries, to name a few. It's easy to find yourself scrolling through Willingham's social media feeds for an hour watching his video montages where he transforms the world around him.

It's popular — wildly popular. Willingham has more than 164,000 followers on Instagram and more than 1.8 million on TikTok.

TikTok specifically has been amazing for his art. Willingham started actively using the app in February, right around the time the coronavirus pandemic hit Washington, and it wasn't long until his art videos found an audience.

While a great portion of his artwork focuses on pop culture, the Pacific Northwest and current events, the pandemic definitely had an impact. Willingham said he didn't want to ignore what was happening but instead find ways to "lighten the mood," some of which could double as a public service announcement. You might have seen this photo where he used Pike Place's "Public Market" sign to say, "While in public, wear a mask." Iconic? I'd say so.

It's something we've seen throughout 2020 — artists using their art to spark change, inspire hope and make a statement. Countless murals were popping up what seemed like daily for months all over the city. In June, 16 artists painted the Black Lives Matter mural in Capitol Hill, which was repainted and made permanent in October. These are just two examples of the many ways we've seen people use art to inspire happiness and pay tribute to tragedy this year — affirming just how important art is, especially during times like this.

It's not outrightly clear based on his social media alone, but Willingham is just as passionate about music as he is his cutouts. While COVID-19 certainly has had an impact on his art — not being able to place his work in different parts of Seattle and the state as much, for example — it's his passion for DJing that's been affected most.

"Live music, I just miss that a lot," he said. "I think a lot of people just miss live shows [...] When you take away live music from a lot of people's lives, they realize how much it means to them."

Willingham said he hopes these small music venues he loves to frequent and perform at can survive the pandemic, and he isn't alone. Live music venues across the nation have had to grapple with the fact that as restrictions lift, they will likely be some of the last businesses to reopen. Being closed since March means many of these venues are struggling. Music lovers in Washington came together for this reason to create the COVID relief fund Keep Music Live, aiming to raise $10 million to help support and keep open the many independently-owned venues with capacities of less than 1,000 guests in the state.

[Keep Music Live WA fights for the future of our venues]

Whether it's through painting, performing, writing, directing or any other creative outlet, "art has always been important in how people express themselves," Willingham said, and this fact has only been affirmed this year. While Willingham wants to make people smile with his work, he said art also helps him personally understand and process when things happen that are hard to grasp, and he hopes his art does that for others, as well.

"I think it helps you express things that aren't expressible with words," he said. "Times of hardship always kind of create the best art that's really inspiring and hits you in a different way that we can't really do with words."

You can keep up with Willingham on Instagram and TikTok, as well as his website RudyPrints.com. His recently released book "Cut it Out Seattle!, Vol 2," featuring 62 pages of his street art, is currently available for purchase.