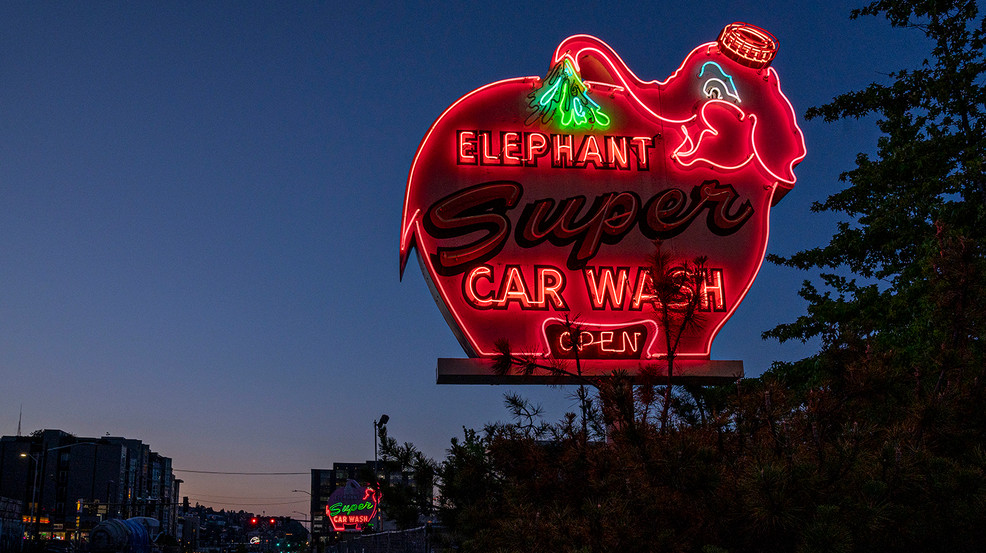 Historian Brad Holden shares the story of Bea Haverfield, known as the Queen of Neon. She designed the Elephant Car War sign as well as many other iconic signs around Seattle. (Image: Rachael Jones / Seattle Refined)
SEE MORE

Historian Brad Holden is preserving Seattle's past, piece by piece

The Seattle area is rich with history. Refined has shared stories about local eateries including The Roanoke Inn on Mercer Island - which has been in business for 105 years and Chace's Pancake Coral in Bellevue which first opened up in 1958. But food isn't the only path to our past! Seattle's Brad Holden is keeping Seattle's history alive through the photos and keepsakes he curates and shares via Instagram. Refined checked in with Holden to get the scoop.

Seattle Refined: Brad Holden you’re an author, you’re a historian, you’re a finder of old things. Why are you so passionate about preserving Seattle’s past?
Brad Holden: I’ve always enjoyed going to estate sales, flea markets, rummage sales that kind of thing - bringing it home and kind of researching the story behind it.

What kinds of things do you post there?
I cover the whole gamut. So pretty much from when it was first founded in 1851 all the way up to the 90’s and everything in between. That could be anything from either of the Seattle World’s Fair - the first one in 1909 or of the 1962 World’s Fair. Seafair stuff, old advertising, you name it.

How many pieces do you guesstimate you have?
That’s good question. It’s probably in the hundreds.

I think it would be a special treat for you to show us a few of the things that you’ve collected!
When you look at the name on this envelope, you’ll see that it says A.A. Denny. That’s Arthur A. Denny - so he’s the founder of Seattle! And these are from the 1860’s. One of these envelopes has some writing on it. I believe it was his writing.

That is so cool. I mean that is incredible. You literally have pieces of Seattle’s history like literally in your hand.
This is a program from The Seattle Theatre this is from 1928. After a few years of being open they became known as the Paramount Theatre. Of course it’s still open today.

And then going up a bit this is from the 1940’s. This is a trifold envelope from the 'Twin T-P's Restaurant'. Do you remember this place? I think it closed down in the 90’s. So this opens up for the menu part. If you notice right in the middle, chicken is kind of profiled. So according to local legend, 'Colonel Sanders' of KFC had his start here, he was cooking here and legend holds that he perfected his chicken recipe from the Twin T-P’s during this time period.

So what’s the reaction you get from folks [when you share these treasures]?
People love seeing what kind of treasure I’m gonna find from week to week. They share the memories they have of these places and I love hearing that that because it really brings it alive.

Well one of the iconic - (I think) landmarks in Seattle is of course the pink Elephant Car Wash and we recently heard in the news that that’s going to be torn down, but the sign will be saved. You’ve done a ton of research into the artist who created that sign and many other landmark signs.
So a little history on the Elephant Car Wash. It first started out in the 50’s known as the [5 Minute] Car wash. One of the first semi-automated car washes in the country. In the mid 50’s - that’s when they hired a local sign company, 'Campbell Neon'. The lead designer there was lady name Bea Haverfield. So she took the existing elephant sign and added her own unique touches to it. At the base of the sign there’s four smaller elephants. There’s two blue elephants that were for her two sons and two pink elephants for her two daughters. I understand it’s going to MOHAI and they’re going to restore it.

I think it’s gonna blow people away when they hear what other signs she created.
The first sign she created was in the 1940’s it was the original Ivar’s sign. They opened their original location on the waterfront. From there she created the 'Chubby and Tubby' sign. They were an old chain of stores here and sadly they’re gone. The original sign for the Cinerama Theater. Another one that bit the dust this year sadly. One of her most famous ones is she designed the signs for Dick’s Hamburgers.

And both the Ivar’s sign and the Dick’s Hamburger’s sign that have that kind of cursive font - and that’s her original handwriting. So kind of a memory of her from the past that you can still see on the signs.

Why is it such a passion for you to share Bea’s story?
I really enjoy kind of looking in the corners of Seattle history. And covering stories about people, places and events that have never been covered before.

When are we hoping to learn more about Bea - will there be an exhibit, and where is it?
I’m happy to announce that we are going to have an exhibit at the Edmonds Historical Museum. I’ve been working with them for several years now and I’m helping to put this exhibit together. So it’s going to be a sign exhibit about the history of local signage here in Seattle. We have a lot of surprises coming up. But one I’m most pleased about is - Bea’s sketches are going be on public display for the very first time ever. It opens in January [2021]. It will remain open throughout 2021.

So what are you working on now?
I’ve been spending most of my year writing up my follow up book to my first book I wrote, 'Seattle Prohibition'. I’m writing a biography of a man named Al Hubbard. He has a really unique story.

Is there any kind of Holy Grail item that you’re always looking for that would just 'make your millennium' to find?
Yeah for sure. During Prohibition, going back to my first book, the top bootlegger was a guy by the name of Roy Olmstead. I would love to find anything connected to him. From a sales recipient with his signature on it to anything that was linked to him. Anything with a direct connection to Roy Olmstead that’s - definitely my Holy Grail!

What have you learned about Seattle from sharing these amazing artifacts?
I just saw a quote a few days ago. Basically [the quote] was ‘Every twenty-five years, Seattle sheds it’s exoskeleton and a new version emerges.’ And it’s very true. That’s what my research has shown. There’s been a lot of layers to Seattle’s history. There’s been a lot of different versions of Seattle. I would argue starting in the late ’90’s, a new version of Seattle emerged - the tech Seattle that we all know today. And I’m curious to see what new version emerges from here.

Thank for your passion for preserving Seattle’s History it’s so much fun talking to you.
Thank you for having me on.

For more on Brad Holden and his curated collection, check out the Seattle Artifacts Instagram account. Brad's new book about Al Hubbard is due out Summer 2021. You can see his first book, Seattle Prohibition: Bootleggers, Rumrunners and Graft in the Queen City here.