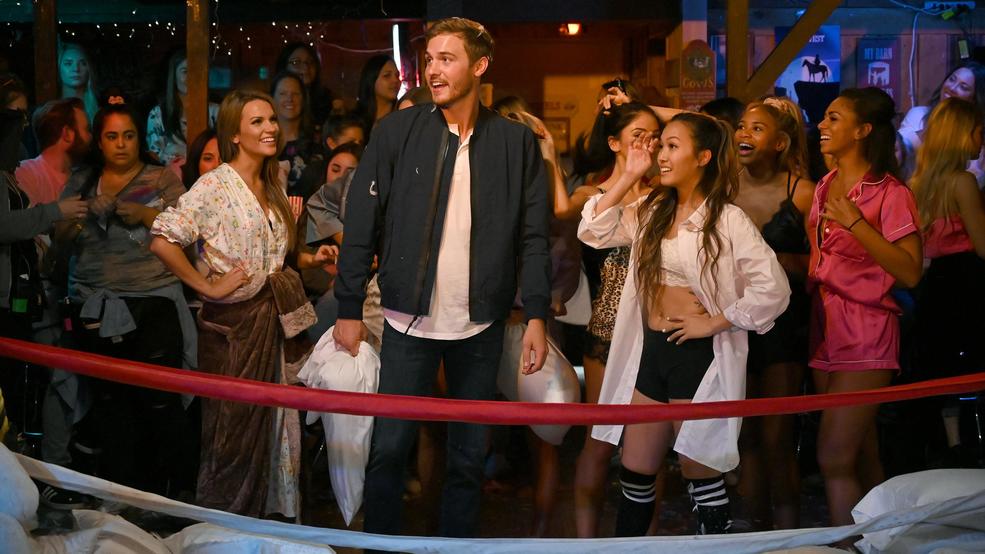 Rose Recap: Who is Fake, Who is Real and Who Really Cares?

Brandon: The drama is heating up on 'The Bachelor', this week a country music superstar gets in on the action, but first we have to talk about last week because there were tears flowing. Before we get to the drama, let's talk about a really lovely One-on-One date: Peter and Victoria P.

Brandon: Who knew that Westlake Village, a suburb of Los Angeles, had such a robust line dancing scene. They go to a bar, and this place is packed.

Jenna: Victoria and Peter hit it off, they have a great time - they even have a little bit more of a connection because she opens up to him about kind of a troubled past.

Jenna: Back at the mansion they're still trying to unravel this whole Champagne Gate thing, or as Hannah Ann likes to call it - Champagne Fanasco.

Britt: Kelsey you're at the bottom of my list. I know she's getting a bad edit, but also - I really dislike that gal.

Brandon: Hannah Ann and Kelsey may have been the players in the Champagne Gate drama, but we get some more drama and this time it's Sydney and Alayah who come to the forefront with a real battle royale.

Gena: At first I thought Sydney was just kind of coming at Alayah a little bit personally and I didn't really think that Alayah was that bad, but then more and more women start coming out of the woodwork about how Alayah is in the house. Is she there for the right reasons? I don't know.

Jenna: I think the quickest way to settle something in a house, is a pillow fight. And that's when our girl Demi comes back.

Brandon: Here's my thing about the pillow fight. There weren't any rules to speak of. We don't know who won, who lost - eventually Sydney and Alayah are just back in the ring fighting each other because producers clearing thought 'Let's run it back.'

Britt: Sydney thinks that Alayah is too prim and proper, too perfect and is putting on a show.

Jenna: The best part is when they're on a Group Date, and Sydney just asks her point blank "Do you have a job?"

Brandon: Here's where the twist is. Normally in this situation the Bachelor would use his deductive powers to try to suss this out a little bit more cautiously. Peter on the other hand decides to take it right to the group, and asks Sydney to name names in front of everyone.

Jenna: Then we get to the pool party - supposed to be fun, that's when Peter really wants to ask everybody whether they like Alayah.

Gena: And also, more information comes out about Alayah. She actually knew Victoria P. beforehand. Alayah asked Victoria to not tell people they knew each other before the show, which is really shady and weird.

Jenna: Then Peter makes an executive decision to actually do something and not give her a rose.

Britt: So for the first time in modern history, the same time we get a villain, the Bachelor sends home said villain instead of keeping them around for weeks and weeks. Or does he? Because he sends her home, and then we see in previews that she might be back...