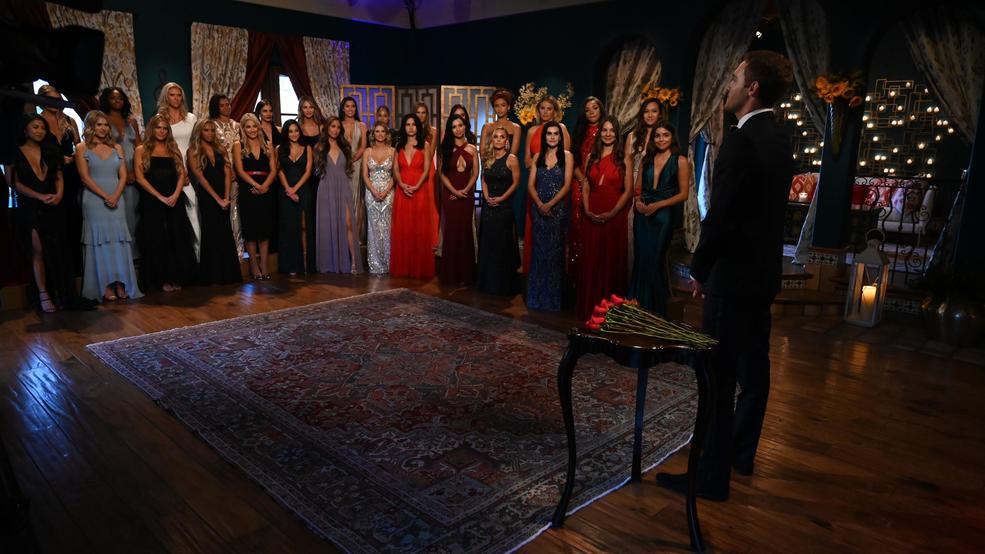 Brandon: Last week Peter's journey to find love to a backseat to a battle over a bottle of Dom Perignon, yes - #ChampagneGate was center stage last week, but before we get there, we have to talk about the conclusion of Peter's conversation with Hannah Brown.

Jenna: I don't think any of us were expecting Hannah to go "Yes, I want to join this competition, I'm going to go ahead and sit over with the girls!" No - she was The Bachelorette, she's not going to be dumbed down to that. But the whole goodbye-ness with them was really awkward.

Britt: The conclusions seemed like there was really no conclusion, and I think there are a lot of people talking - a lot of people in our Bachelor Facebook Group - who agree with me, and I'm not the only one who thinks this, that Hannah is gonna be back, somehow, someway.

Gena: So meanwhile, while the fallout of Hannah Brown and Peter is happening - he's still on a date, we can't forget that.

Britt: He comes out, and first of all - I can't stop laughing because his entire body, and beard, is covered in the glitter from Hannah's dress.

Jenna: Some of the women speak up, one of them really does, and says "You know what? If you're not emotionally available, that's not fair to us and why are we even on this show." He comes back out and starts making out with girls, right bak in it, especially Mykenna. So then we finally get back to the Mansion, and the women have one last time to steal his attention before the Rose Ceremony, and that is when Kelsey and Champagne Gate happens. The lowdown is that she has this special bottle of champagne that she's been saving for a year, and was waiting for a special time to open it. I get it, I've done that before - I think it's a little weird she's saving it for The Bachelor, but OK. She sets it all out, and in walks Hannah Ann with Peter, and they open up that bottle, and Kelsey is pissed.

Britt: It's the pop heard round the Mansion, and also Kelsey - time out. Unless your great great great great grandmother brought that champagne over on The Mayflower, it doesn't matter! Get another bottle and pop it! Come on.

Jenna: We think that this might have been a little bit planned, but Kelsey's reaction was not planned, and it was amazing.

Brandon: The most stunning part about #ChampagneGate was after Kelsey threw a temper tantrum across the entire mansions and basically threw everybody she could under the bus, she then got a rose.

Jenna: Hannah Ann and Kelsey both stick around, now we're up for the next Group Date which is a fashion show.

Brandon: I have to say, "You get all the clothes" is the biggest date reward you could possibly give these women. $20,000 worth of clothes is probably better than winning this show.

Jenna: So Victoria F. says basically, "I'm uncomfortable with this" but turns out she was actually ok, comfortable with this. She was kind of putting it on really thick, like "I don't want to do this. I'm insecure" but then walks out and is like "BOOM. I got this." She loses to Hannah Ann because Hannah Ann had a little bit more confidence, and then Victoria F. kinda gets more one-on-one time with Peter afterwards and plays up, "I don't know if I want to be here. I don't know if this is right for me" and he just buys into it 100 percent.

Brandon: And then the drama continues on the date. Again, it's Kelsey and Hannah Ann and this time Hannah Ann steps over the time by saying that Kelsey had been bullying her.

Jenna: "Bulling" is a buzzword on The Bachelor, if you say that - it's kind of a zero tolerance, so of course Peter has to jump in and confront Kelsey about it.

Gena: The things she was saying to people was not ok, and I think Hannah Ann had every right to bring it to Peter's attention.

Jenna: The big question also in the episode was "Where's Kelly?" Kelly was a huge player in the very first episode, and we barely see her at all. So she kind of was a little bit moved down on my frontrunners. I think it's now Hannah Ann, Madison, and Victoria F. and I guess we'll just have to see how it plays out tonight.