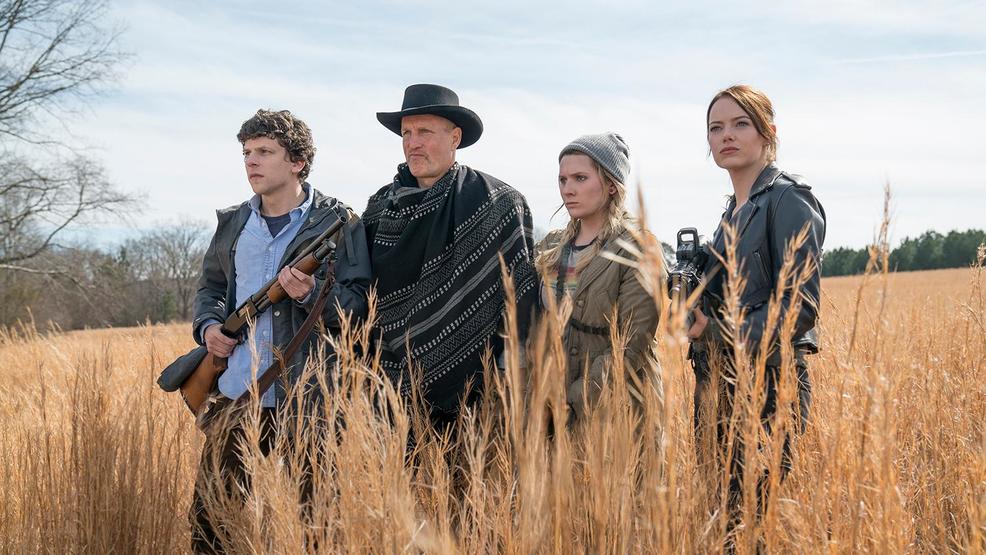 The horror comedy “Zombieland” released at arguably the best time for zombie-pocalypse features back in 2009.

“The Walking Dead” would begin its run a year later, and we all know how that did. Riding off the tails of “28 Days Later”, its sequel “28 Weeks Later”, “Quarantine” and the “Dawn of the Dead” remake to name a few, “Zombieland” was a breath of fresh blood, embracing the genre while spinning it on its head. It was funny and sarcastic, taking a hot piss on the seriousness of its predecessors while still maintaining a very gory core.

After struggling to lock down the perfect script, “Zombieland: Double Tap” is finally hitting theaters 10 years later, and though the entire gang is back doing their same old shtick - killing zombies in fantastic ways, meeting a plethora of weird survivors, making an endless joke of Bill Murray, etc. - there is enough newness this time around to win over fans of the original.

Set 10 years after the first, “Double Tap” jumps back into the lives of Tallahassee (Woody Harrelson), Columbus (Jesse Eisenberg), Wichita (Emma Stone) and Little Rock (Abigail Breslin) who have survived the outbreak of mutated mad cow disease in humans by mastering the art of the zombie-takedown and sticking together. They’ve taken up residence in the White House and live happily for a time, mollified by safety and the endless national treasures they uncover there.

Little Rock is the first to crack. An adult now, she feels like she's missing out on experiences people her age should enjoy. Wichita, bored and - worse - feeling artificially placated by her longterm relationship with Columbus, leaves with her sister to find out what and who are still out in the world. Columbus is heartbroken, but quickly subdues his sorrow with Madison (Zoey Deutch), a brainless human (though she does still physically have her brain), stuck in the fashion of post-apocalypse. Think Juicy outfits and white Louis Vuitton handbags.

When Wichita returns with news that Little Rock has ditched her for a pacifist hippie named Berkeley (Avan Jogia), the crew takes off. First stop? Graceland, once home to the king of rock 'n' roll, Elvis Presley. They miss the duo, but meet other survivors Nevada (Rosario Dawson) and a pair of zombie-slayers (Luke Wilson and Thomas Middleditch) whose looks and persona are eerily similar to what Tallahassee and Columbus have going on. The scenes they have together are the definite highlight of the film and exemplify what it has to offer audiences. There is one long take in particular that shows mastery of camerawork, direction and the comedic timing of the actors who, individually, are forces in their own right.

The crew eventually finds Little Rock at a no-guns hippie commune called Babylon, named for the David Gray song, obviously. There are plenty of young people, but very little common sense. Their extravagant partying attracts the newly evolved breed of super zombie dubbed the T-800. The foursome concoct a plan to outsmart the undead, save the young people and live to see another day.

The difficulties a straightforward sequel faces are many, but particularly in the action-adventure genre the struggle lies - not in world building or character development. Those were done – and done well, most likely – in the first film. No, a sequel such as this one needs to continue the story, nurture the characters, while also taking audiences somewhere worth another film. This leads many, if not most, down the path of heavy gimmicks and new half-baked characters that don’t always maintain the spirit of the original.

“Double Tap” doesn't have the iconoclastic feel of its predecessor namely because it isn't doing anything revolutionary. "Zombieland" felt original, something we hadn't seen before. The comedy mingled with brutal bloody zombie slaughtering is back here, and the gimmicks employed to keep the story alive are, at the very least, funny. Dawson, Wilson and Middleditch are welcome additions, and Deutch plays the insufferable ditz Madison with so much over-the-top bravado that we can't help but yearn to see her in more scenes. What would normally be a hefty, "Woah, scale it back" surprisingly works here, and actually matches the general atmosphere the film creates, that of raucous ridiculousness.

It helps its cause that director Reuben Fleischer returns to direct this installation. He has a firm grasp of what fans of the original want, which is pretty much most of the same with a little different. There is still some grotesque bits. You know, guns blowing up bodies and knives slicing through flesh. The easily queasy won't find the comedy worth the carnage. But for the rest of us, "Double Tap" transports us back to the fun of what the end of the world can be.