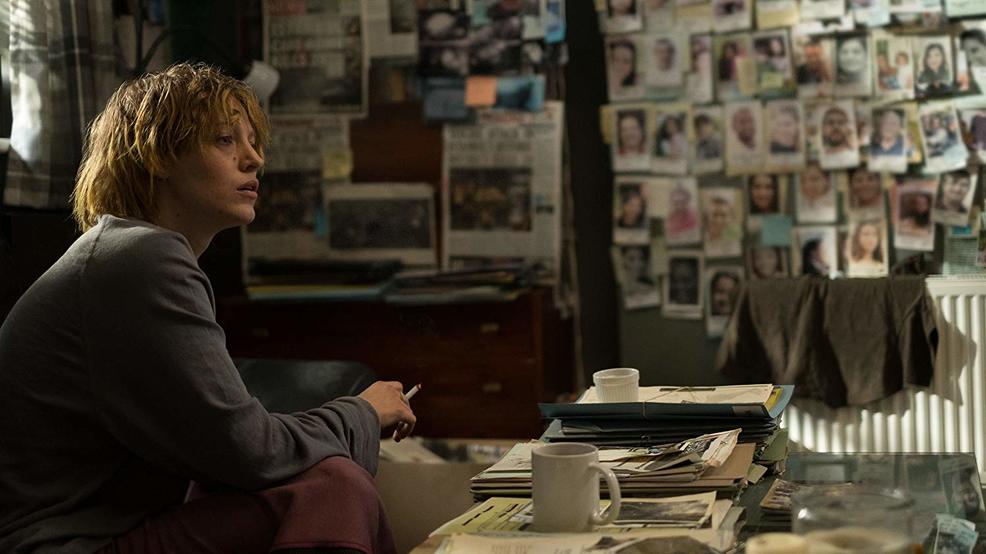 In this edition of "Let's Hope a Wig Can Save the Ship", Blake Lively is our hair-oine (I'm sorry, I had to) whose various poorly trimmed head rugs distract us long enough to completely lose the plausibility of "The Rhythm Section", her newest thriller. In our defense, even without the scalp distraction, it would have been difficult to have found any credibility in the film. Based on the book by Mark Burnell who also wrote the screenplay, the movie plays like a bad grocery store spy novel, going through the motions of the genre without a solid story to back it up.

"The Rhythm Section" refers to the beating of one's heart (the drums) and the whir of one's breathing (the bass), an allegory that never really comes full circle, nor is it employed for any reason other than dramatic voice over and a catchy title. You could say many of the film's elements are used similarly for theatricality over necessity. Lively's character Stephanie is a former A-student at Oxford who spirals into drugs and prostitution when her entire family is killed in a plane crash. The opening of the film sets up just how much the tragedy has affected her, as we're shown the same flashback sequences for what seems like half the film's runtime.

So Stephanie - her hooker name is Lisa because, well, if Lisa doesn't scream sex, I don't know what does - is living her life in a brothel, wallowing in pills and booze when a man posing as a client upends her life again. The plane her family was on went down because of a bomb, a fact that was somehow withheld from the public in a massive government coverup. The man who made the bomb is walking the London streets as a free man. Unable to let it go, Stephanie grabs her plastic bag full of belongings and runs out of the pimp's house, willing to believe the man who turns out to be as legit as they come: a "freelance journalist".

At the journalist's apartment she finds the investigative work he's done splattered dramatically on the walls. Photos of every passenger including their seat numbers cover one room; folders of top secret information are strewn around for anyone to find. He is surprisingly trusting, leaving a harlot he just met alone in his flat with highly classified information. Stephanie is hooked. She rifles through some of his findings, snapping pictures until she finds the school I.D. belonging to the guy who made the bomb. Because, sure, bomb-making is a highly lucrative side gig for a struggling student.

She tracks him down at his college, but only manages to lead the bomb-maker straight to the journalist whom he kills, obviously. Without anyone else in the world, she treks out to Scotland where she finds the journalist's inside man (Jude Law), former MI6. Without any inclination that Stephanie has the raw talent or capability of becoming a spy-slash-assassin, he agrees to train her, whipping her into shape, forcing her to detox and and forging from her crumbling former self a shockingly adept agent.

"You have no idea the scale of the mess you have made," Law's character says dramatically. That's because, as has been reinforced multiple times, the reason for the coverup is to avoid triggering war with the Middle East. The bomb maker is, apparently, a key source of intelligence. Killing him for revenge is short-lived when you've meddled with international terrorism.

Yet despite both the journalist and Law's character stressing this, they are willing to involve Stephanie and push her towards her inevitable involvement. Why? And why a girl with no background in anything even remotely close to espionage? That is perhaps the greatest hurdle "The Rhythm Section" fails to surmount: providing reasonable plausibility for every action committed throughout the film.

To recap, in a matter of months, Stephanie (fka Lisa) goes from a drug-addicted prostitute to a sober, fit, gun-wielding killer with a firm grasp of international affairs and general spy nuances. From there, the film doubles down on its stock in Stephanie. She sweet talks her way around the spy agency's middle man (Sterling K. Brown), impersonates a deceased international operative, accepts several deals to murder assigned hits and, at the very least, manages to find far better wigs to wear while doing these things.

I hope it's obvious where I'm going with this, but if it's not, I'll say simply that the number one thing holding "The Rhythm Section" from being a bona fide quality thriller is just about everything you'd expect from a bona fide quality thriller. The driving story - the bomb on the plane, young girl seeking revenge, a preposterous coverup - perhaps wouldn't have felt so ridiculous in different hands, or if the setup weren't distorted by sap. Lively dons a British accent like she does the wigs, and though she throws herself into the role, even she can't make a clean brush of a bad tangle.