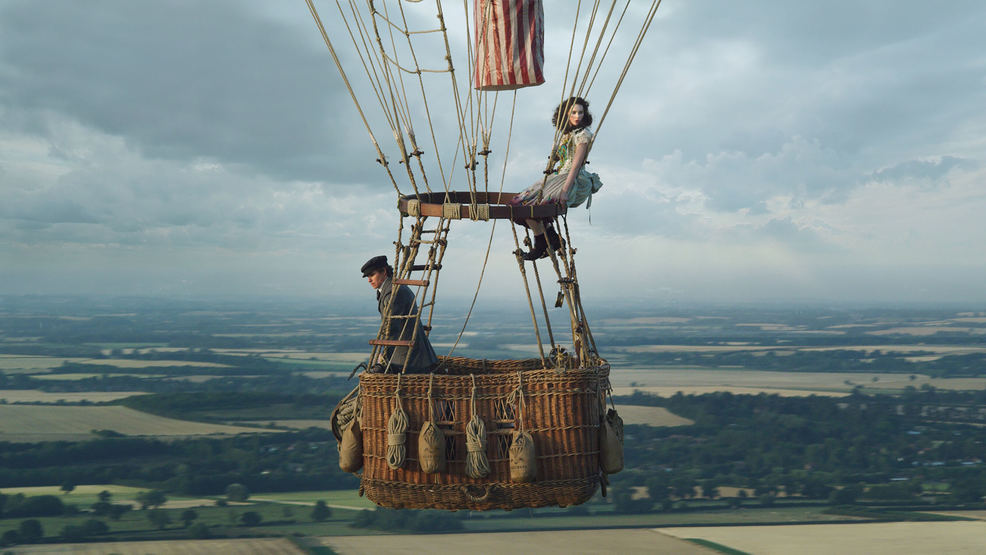 Review: 'The Aeronauts' is an unambitious telling of a totally wild story

Whether you know anything of the scientist daredevils of the 19th century known formally as aeronauts - or if you think "aeronauts" is a fancy, possibly Australian word for peanuts, it's hard to fully comprehend the reality of what these people did once upon a time.

Which is that they literally jumped in an oversized basket precariously affixed to an even larger balloon and went up in the sky.

For many it was pride; others to gain knowledge. In both cases, they were nuts: the crazy, non-edible kind. The new Amazon Studios film "The Aeronauts" is bringing their stupidity - I mean story - to the big screen Dec. 6 (and then streaming on Prime Dec. 20) so that all the world will know to the exact heights some would go to learn something new.

James Glaisher (Eddie Redmayne) is a British scientist interested in learning more about the world above. He's determined to fly for the first time, for the sake of progress and knowledge. He's also the laughing stock of his colleagues who don't see the need for conducting experiments higher than any person has gone before.

Glaisher seeks the help of Amelia Wren (Felicity Jones), an established aeronaut with a jazzy performing streak (also a trained pilot). Her husband taught her the trade before he died two years prior, jumping to his death in order to give Amelia a chance at survival when their balloon malfunctioned. Despite some hesitancy and fear of returning to the scene of her beloved's demise, Amelia dons her clownish outfit, does a showman's dance for a paying crowd and hops back in the basket with Glaisher.

What ensues is a nearly two hour voyage that sends the pair higher than anyone has gone before: 37,000 feet (or nearly seven miles) into the atmosphere. Wren is piloting - which doesn't consist of much, pulling a few strings - but mainly giving her companion a hard time about his silly equipment. Glaisher takes measurements and releases carrier pigeons with his findings, should their journey turn fatal. The thrill of soaring through and then over clouds intoxicates them and convinces them to continue upward. It is somewhere after they break the previous record that things begin to go sideways. Glaisher seems to lose his mind before passing out completely. Wren, nearly frostbitten, tries to send them earthbound, only to discover the release valve is frozen shut.

She daringly climbs atop the balloon to save them, but it is the final few minutes of their journey as they race towards the unforgiving ground that the true, calculating wit of science proves its worth. The duo must rely on the other's strengths to survive the most audacious, albeit foolhardy, trip ever, one that binds them to one another and to the future of meteorology.

The rest is history... or is it? While it's an idyllic ending to the film; Glaisher and Wren returning to the skies on various other excursions, an intimate camaraderie formed between the two - the unfortunate reality is that Amelia Wren never existed. James Glaisher was a prominent figure in validating meteorology as a scientific study. He was a founding member of the Meteorological Society and the Aeronautical Society of Great Britain, and, as the film hints, is credited with discovering that the atmosphere has layers, among other revelations.

Jones' character, the brazen female acrobat and pilot Wren, isn't real, much to our disappointment. Her French husband who died to save her on a balloon expedition gone awry? Not a person either. Glaisher wasn't alone in the basket, but his real-life partner, Henry Coxwell, was exchanged for Wren when, one can imagine, film executives sitting in a room decided two men alone in a balloon wasn't nearly as sexy or enticing as an attractive couple of the opposite sex, a problem that a little rewriting and an "inspired by a true story" tag couldn't fix. It doesn't hurt that Redmayne and Jones have the history and rapport built with audiences from their Oscar-winning film "The Theory of Everything".

The skewing of history doesn't make the facts of Glaisher's ascent and dramatic descent any less fascinating. It is estimated he and Coxwell did in fact reach where a jumbo jet finds cruising altitude. Their balloon did malfunction, Glaisher passed out and Coxwell showed incredible courage climbing into the rigging to release the stuck valve. And, if we're being honest, it is a much more interesting story when Coxwell becomes Wren played by Jones with a soft, but assured performance.

Redmayne is predictably good, too, though it's the visuals that steal the show. Several scenes were shot from a helicopter. A real balloon carrying the actors soared 8,000 off the ground. This imagery is whimsical and magical, if not simultaneously terrifying. Those with acrophobia or anything near it would be best suited to skip this one. It becomes dizzying at times, in some very minor ways like "Gravity".

But don't expect the emotional payoff (or the completely mind-blowing effects) of the latter film. "The Aeronauts" is an unambitious telling of a totally wild story. Relationships are glazed over with minor backstory, and, though the voyage itself is entertaining, it confines the film to the event. Writer-director Tom Harper intercuts the balloon scenes with flashbacks that don't illuminate anything new, but merely prolong our journey with the reckless twosome. Ultimately, the film has the feel of a sci-fi fantasy that piques our interest on the subject while also failing to comprehensively build the characters and their world. Instead, it races forth, sputters loudly, but never really takes us off the ground.