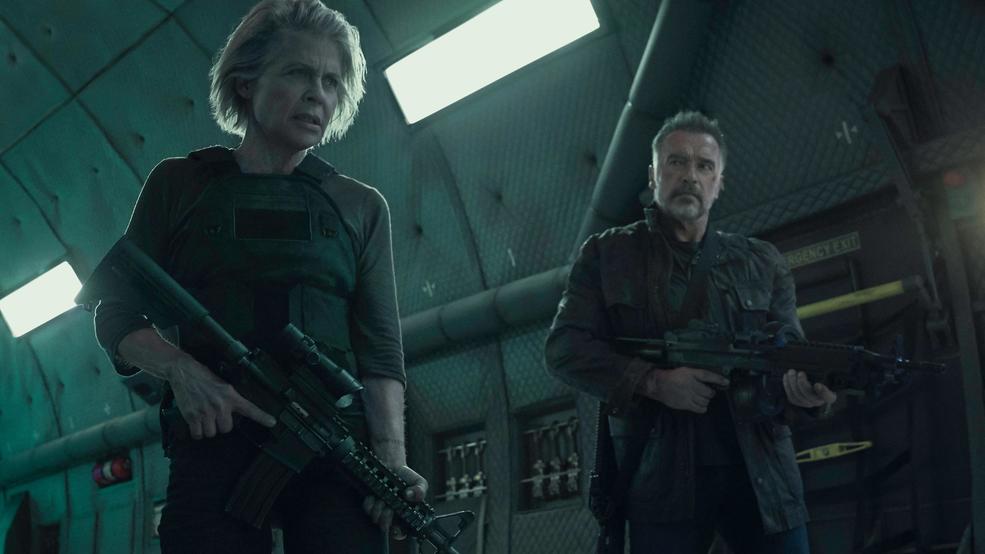 Review: It's good to see the old crew back together in 'Terminator: Dark Fate'

It's been what feels to be a particularly long 28 years since legendary writer-director James Cameron had ownership of "The Terminator" franchise, and with the release of every new addition since "T-2: Judgment Day" in 1991, we've felt his absence. There were three films made after Skynet was conclusively defeated: "Terminator 3: Rise of the Machines", "Terminator Salvation" and "Terminator Genisys" - and each one seemed to drag us down rabbit holes of side plots and miraculously salvaged robot parts until our heads nearly melted like a T-1000. Our faithful protagonist John Connor, played by a revolving door of actors including Christian Bale, Nick Stahl and Jason Clarke, was unable to escape his destiny and so he either fought back or joined the evil, self-evolved breeds of artificial intelligence.

With the sixth feature in the series, "Terminator: Dark Fate" is in Cameron's hands once more, and he's simplifying the story down to what kicked off our love for futuristic, time-traveling, self-realized android assassins. For the purposes of this film, and to the inevitable delight of most of the franchise's fans, "Dark Fate" lives in the same universe as the first two films, but not the last three. John Connor was killed by a T-800 (Arnold Schwarzenegger) as a young boy, but only after he and his mother managed to thwart Skynet's creation altogether (please see the ending of "Judgment Day").

[Review: 'Harriet' spends too much time poeticizing a life that needs little dramatization]

Why was John killed if he was no longer a threat to Skynet, which now is never going to exist in the first place and hence shouldn't have been able to send a Terminator to kill him? That's unclear, or perhaps there is some part of this timeline I can't keep straight, given what all the muddling five films and multiple diverging universes have done to the story. Regardless, John is dead, and his mother slash end-of-world-vigilante Sarah Connor (Linda Hamilton) has lived in the shadows, stalking Terminators sent from the future and evading mental health institutes like it's 1991.

It's good to see the old crew back together. Hamilton hasn't been in a "Terminator" film since "Judgment Day", and though Emilia Clarke did her best Linda Hamilton impression for "Genisys", there is a certain je ne sais quoi that possesses an audience when the OG inhabits the role. Her energy in the role is palpable, and her on-screen chemistry with Schwarzenegger is what helped make the films the classics they are.

There are some new faces introduced as well. A human-android hybrid named Grace (Mackenzie Davis) has been sent from the future to protect Dani (Natalia Reyes), a seemingly ordinary girl living in Mexico City. The conceit, we assume, is that history is repeating itself. (Well, not repeating itself, since it technically didn't happen in the first place with the fall of Skynet, but you know what I mean.) Dani is the new Sarah, a young girl who, they assume, will one day give birth to the leader of the resistance a la John Connor. Sent by Legion, the new mega-maniacal company replacing Skynet as what relegates the human race to the shadows of the world's ruins, Rev-9 (Gabriel Luna) is the scariest AI fighting machine we've seen thus far. He's fast, strong, impossible to kill and can not only turn to liquid as he shape shifts, but can reassign his skeletal frame to operate as a separate entity outside the rest of his body.

An older, but no less badass, Sarah Connor joins Grace and Dani as they travel over the border from Mexico into Texas, narrowly escaping their robotic pursuer. They unwittingly seek assistance and shelter with the same T-800 who killed John. He goes by Carl now and lives a quiet, suburban life imitating that of a normal human. They must find a way to destroy the Rev-9 before it can complete its mission, ensuring the future of humanity has no fighting chance.

A lot has happened in 28 years in the real world, one of the greatest changes being, of course, the feminist movement. "Dark Fate" plays into this pretty heavily, employing a female protector instead of the male who has been sent in films past. Also, unlike Sarah, Dani isn't slated to bear the next savior of the human race, but she (SPOILER ALERT AGAIN) is the savior herself. She is shown in cut-forward scenes as the strong, independent leader of the resistance. While female empowerment and representation is essential in film (particularly for this genre which sees mainly bulky, charming, male and often former-WWE stars leading the charge), there is some stagnancy in "Dark Fate" that is hard to pinpoint. The script moves, and the action is constant. The performances are good, and Davis as the newest action hero works. She is endearing in her weaknesses and empowering in the humanity she controls, which also doesn't keep her from fulfilling her duty. She has a mean punch and back kick to boot.

Perhaps that unnamed, bothersome itch that prods at you is that "Dark Fate" feels a little too familiar. Its layout closely mirrors that of the original "Terminator" film. There is beauty in its simplicity, sure. But to revive these characters and regurgitate a movie that has been done, stamping this one as the "female Terminator" film and playing on the audience's nostalgia for Hamilton and Schwarzenegger doesn't make it novel. While its an enjoyable ride with plenty of fun, flashy, edge-of-your-seat action sequences and wink-wink inside jokes, it's not enough to hope the film's seminal catchphrase ("I'll be back!") should be taken literally this time.