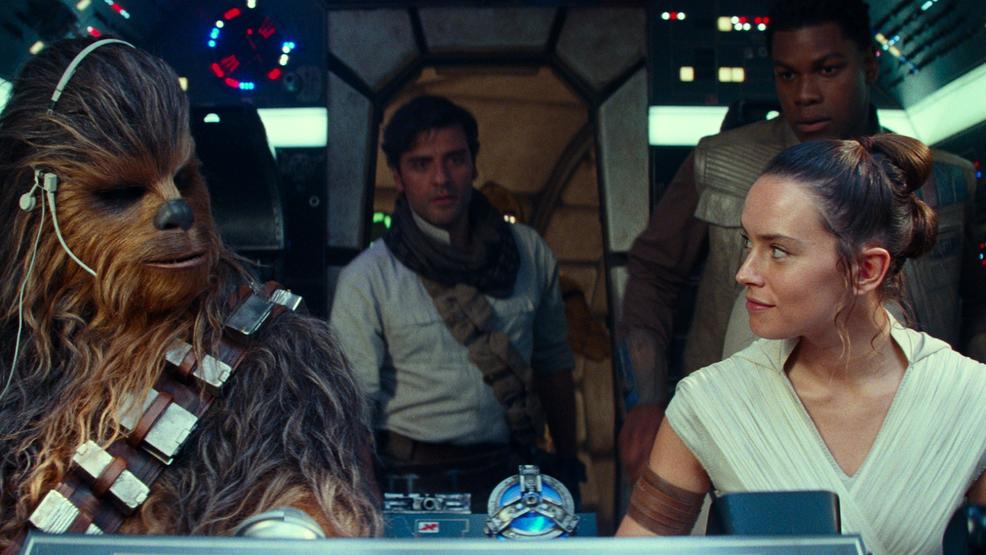 Review: 'Star Wars: The Rise of Skywalker' marks the end of the saga, as we know it

With the holiday season comes another "Star Wars" film. Except this year, fans are walking into the theater with the bitter-sweet knowledge that this one marks the end of the "Star Wars" saga as we know it. Number IX in the series, "Star Wars: The Rise of Skywalker" isn't particularly novel in its treatment of plot or characters. In fact, both carry over from prior films, some with more weight than others. But this final installment does exactly what fans of the series want it to: it strikes at the "Aw look who's back! Remember that! This feels familiar!" cord, allowing nostalgia and some fun, fast, flirty fight sequences to close up a property over 40 years old.

(Next is where I disclose a summary of the film. If you haven't seen it and don't want to know general plot points, then perhaps read no further. You know, just to be safe.)

The film picks up where 2017's "The Last Jedi" left off: the Resistance is hanging on by its thinnest thread yet. General Leia (Carrie Fisher) oversees the troops, but gives special attention to Rey (Daisy Ridley) who spends her time training alone in the forest, perfecting Jedi-mind tricks like fighting using only her intuition and levitating above the ground as she searches for the voices of Jedis past. Meanwhile, modern day-Hamlet Kylo Ren (Adam Driver), leader of the First Order, is drawn to remote planet Exegol where he discovers Emperor Palpatine (Ian McDiarmid) still alive and teasing an offer too good to be true: kill the last Jedi and be by his side while they rule over the galaxy.

For those of you with poor memories or little knowledge of the "Star Wars" universe, Palpatine has been the overarching villain of the series since his first appearance in "The Empire Strikes Back". In his youth, he dissolved the governing body in favor of imperial rule, electing himself supreme leader. He was Darth Vader's boss until, as always happens, student killed master. But he's back now (somehow) in zombified form, eager to continue the reign of the Sith empire and push the dark side's propaganda onto the universe.

Kylo Ren is the key for him to destroy the last Jedi, Rey. But Kylo Ren has his own agenda, and they play a game of cat and mouse, using their special connection to project their consciousness throughs space to one another. Rey, with the help of friends Poe (Oscar Isaac), Finn (John Boyega), Chewbacca (Joonas Suotamo), C-3PO (Anthony Daniels) and adorable BB-8, is on an intergalactic quest to find the pathfinder that will show her the way to Exegol so she can finally learn her true identity and confront the evil Palpatine.

The crew hops from planet to planet, always narrowly evading the First Order until they find what they are looking for. Rey, meanwhile, is fighting her own battle. She can feel the darkness creeping up inside her. It doesn't help that her attraction to Kylo Ren upsets her Jedi mindfulness. When Rey learns that she is <redacted spoiler>, her resolve to kill Palpatine, convert Kylo Ren back to the side his parents fought for all their lives and keep her friends safe is tested in an epic final battle with a few deaths, but plenty of gratifying moments to close out the saga.

With J.J. Abrams back at the helm - we love Rian Johnson, but the new string of "Star Wars" films is Abrams' baby - "The Rise of Skywalker" doesn't attempt to do too much in its allotted runtime, something that could have made the film implode. It introduces very few new characters, and the ones it does, Poe's mask-wearing former cohort (Keri Russell) and a runaway Stormtrooper (Naomi Ackie), even feel unnecessary despite their limited screen time. There is a lot of flying and shooting; the dialogue often takes a backseat to the action. But that's what we want and need and love about a series that expands the universe it lives in with each installation.

Despite all the other noise, it is Rey who is our focus. She's been the driving force of the new series (Episodes VII-IX) and she deserves this conclusion to her story which is also the resolution (for now) to the conflict of dark versus light, good versus evil. It's all a bit cliche, sure, but the duality of those themes is played out tactfully and with enough newness to make the film interesting. Avid fans will enjoy the sprinkling of Easter eggs that litter the film, the most obvious of which include Billy Dee Williams reprising his role as Lando Calrissian and the ghost of Han Solo (Harrison Ford) returning to deliver his iconic line one more time.

At the end of the day, "The Rise of Skywalker" came, saw and entertained. It won't be flooding the Academy with Oscar nominations, but it will delight those who matter most. For now, may the Force be with you.