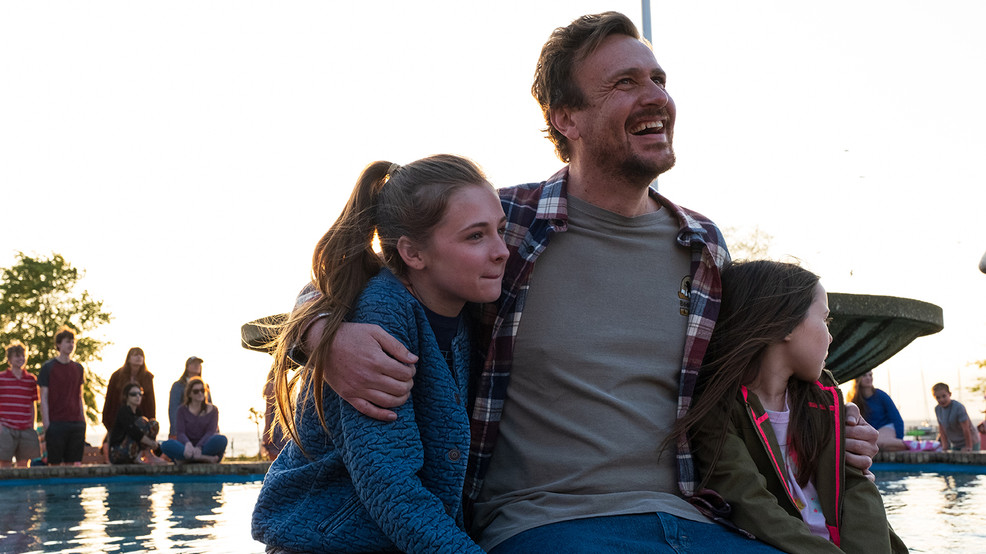 Isabella Kai as Molly Teague, Jason Segel as Dane Faucheux, Violent McGraw as Evie Teague in Our Friend – In Theaters and at Home on Demand on January 22, 2021 (Image: Black Bear Pictures)
SEE MORE

Review: 'Our Friend' is a love letter & thank you note to friends who always show up

Based on the article in Esquire that won Matthew Teague the National Magazine Award in 2016, "Our Friend" tells the devastating true story of the Teague family who lost wife and mother Nicole to cancer at just 34 years old. With two young girls, Matt (Casey Affleck) and Nicole (Dakota Johnson) were forced to weed through the emotional trauma of such news in addition to the seemingly impossible conversations one must have with children as death is imminent. But lucky for them, their best friend Dane (Jason Segel) dropped his entire life, moved in with the grieving family and helped hold things together as their nightmare unfolded.

I probably lost some of you. Yes, it's terribly sad and, like all films about someone dying tragically early, this one hits on all the tear trigger points. Young girls losing their mother? Check. A fresh husband and father left to raise his girls alone, facing their future without a female compass by his side? Check. A woman fighting a disease that strips her of her dignity? Check. It's not a particularly uplifting film. You know within the first five minutes that there isn't a surprise ending. They don't find a miraculous cure. It is terminal, and the journey from there is learning how to navigate life with the knowledge that it will be ending shortly.

But as hard as the film is to watch - particularly knowing it really happened to one unfortunate family - it still offers plenty of levity, thanks to the three leads whose chemistry is palpable and who each play their role with authentic kindness and reverence. Like its source material, the film is about Nicole's march towards death. But then it also isn't. It's about the things and people around you that make life worth living in the first place. The love that holds all of it together. It is a love letter, or perhaps more so a thank you note, to the friends who don't have to be there, but who show up anyways.

The film criss-crosses time, jumping ahead to the terrible conversation that elicits guttural cries from the young daughters (played expertly by Isabella Kai and Violet McGraw), then back to, not Matt and Nicole's first meeting, but the first time Matt meets Dane, one indication (in addition to the title of the film and that of the article which was even simpler: "The Friend") that this is a side story to the main event.

Segel as Dane, the loyal, unwavering friend to the Teague family, is divine, though predictably so. Here, as with most of his comedic roles, he is the tall, goofy uncle-type: a little bumbling, a little awkward, but completely lovable. His timing, for both the scenes that require comedy and the ones that benefit from a dialed-back approach, is natural and punctual. It may be easy to underestimate Segel's talents, but "Our Friend" certainly benefits from them. The same can be said for Affleck. Though he has a tougher persona and a film slate with a harder edge, he also bares his soft spot with an unexpected tenderness.

I recommend reading Matthew Teague's article after watching the film. There are inevitable deviances from what actually happened and a few liberties that screenwriter Brad Ingelsby takes in order to make the film and story more cinematic, and I don't think the film version should be held to every point the article makes. But what reading the source material after watching the film does will give you a greater appreciation for the reality of what the Teague family went through. It is written so beautifully, so viscerally, that it adds another layer to the film, which does a decent job of capturing the subtleties of dying and bearing witness to a loved one's deterioration. "Our Friend" is certainly not a perfect a film, and as heartfelt as it is, there is still something lacking: that thing that keeps you talking about it even days later. It's good, perhaps, for a movie at home when you need a good cry and light laughter.

"Our Friend" is available on premium video on demand.