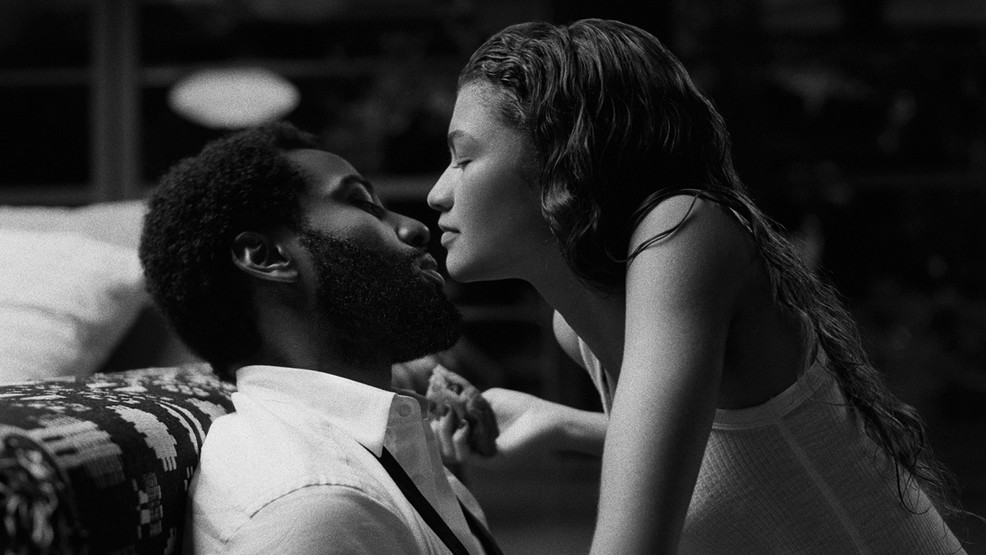 "Malcolm & Marie", the newest film by "Euphoria" creator Sam Levinson, is exactly what you'd expect from the first film conceived, written and shot this summer under stringent pandemic rules. With productions limited on what they could do (from how many people could be on set, where they could shoot, etc), the film is understandably insular, set over one night in a large, remote home with only two characters. Even with the forced smallness of the storyline, its setting and its players, at no point do we feel - like perhaps we've felt these past ten months - trapped in a house with people who irritate us.

Malcolm (John David Washington) is a fast-talking, self-aggrandizing filmmaker on the rise who has just premiered his latest work. The film critic at the Los Angeles Times even hand delivered her compliments, from which Malcolm both takes pride and finds issue. His girlfriend Marie (Zendaya) is moody but curtly indulges him as he rides the high of the night. A scene from a film has never felt more relatable than Marie, still in her luxurious evening gown, preparing mac n cheese from a box for the two to snack on as Malcolm dances through the house, releasing his excitement post-event. He may be ranting, like his long lament about others' insistence on making his films political just because he is African-American, but he is obviously in a good place in a good mood on a good night.

The same could not be said of Marie who stews until Malcolm picks up on her discontentment. She wants to put it off until tomorrow, but we all know that's not how arguments end between partners in a serious relationship. Accusations fling from across the house. Malcolm didn't thank Marie in his speech tonight, a grave miscalculation that has severely hurt her feelings. His film, she claims, was loosely based on her own successful attempt to ditch drugs and get sober. The snub digs deeper because of that and due to varying intricacies born from close relationships. Jealousy, frustration, indignation boil to the surface as the two dance like boxers around the ring of relationship wisdoms and follies, taking jabs, then harder punches until the blows stick and deliver their intended pain.

Normally, films set in black and white, unless serving a very specific purpose, don't feel authentic to me, but such is not the case for "Malcolm & Marie". The ironic, poignant statement it seems to make is that nothing in life is black and white. Relationships are hardly so clearcut, and particularly for Malcolm, the role of race as an aspiring director in an industry historically dominated by white men is hard to shake at every turn in his professional and personal life (I feel strange even writing that, seeing as a major qualm Malcolm has with the fictional film critic is her discussion of race in her review of his film which he feels is politicizing something that isn't meant to be political. Is art imitating life, or life imitating art here?) The black and white also feels so appropriate because there is a level of timelessness to the film, which, at its core, is a traditional relationship drama... with a few notes here and there of comedy and even thriller. "Malcolm & Marie" is unexpectedly contemporary, yet also enduring.

Washington imbues Malcolm with a life force that can't be described as anything other than power: in his physical presence, in his speech and particularly in how he fills the screen with assurance, command and unwavering, yet purposeful, machismo. It's a monologue-heavy role, yet he delivers every word without contrivance. He feels as one with the character, so much that you wonder if perhaps there was no script and he was let to do and say as he pleased, spit-firing thought after thought with such bravado and earnestness, the only choice is to hang onto every word he says.

But the film isn't just about Malcolm. Zendaya as Marie, though 12 years Washington's junior, is the other strong, unwavering tentpole, structurally imperative to keeping the film's success. She gives a powerhouse performance. You can't help but really feel for Marie as a character and that is purely thanks to Zendaya's work. The duo oscillate between screaming and loving, eating and undressing. We've all been there, stuck in a fight that can't end until everything is said. There is no "good" or "bad", "right" or "wrong" here. There is only what is true for Malcolm and Marie, and what's true for us is that we can't keep our eyes off them.

"Malcolm & Marie" is available on Netflix.