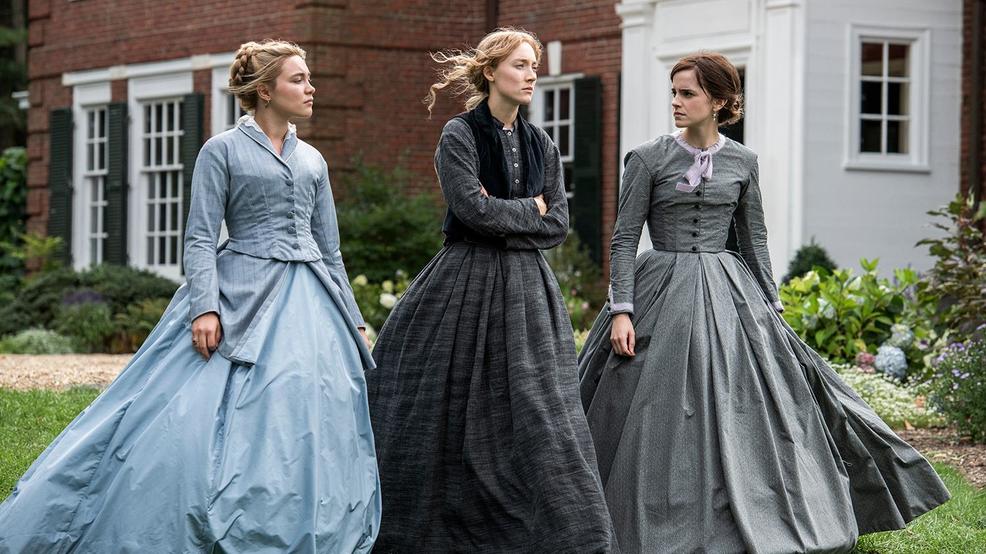 Review: This iteration of 'Little Women' will surely win over a new generation of girls

Rarely does an adaptation so steeped in the national consciousness and embedded in popular culture hit the right notes in the right order for the right audience at the right time. Amongst the clanging of holiday releases that clammer for ticket sales, this year's guaranteed feel-warm-and-fuzzy is "Little Women", the fifth feature film based on Louisa May Alcott's 1868 novel that has been a reading right of passage for young girls since its publication. Actress-turned-writer/director Greta Gerwig, who charmed our pants off with 2017's "Lady Bird", does it again, revitalizing a 150-year-old story with fresh, young actors and a script that appeals to modern viewers.

Jo (Saoirse Ronan), Meg (Emma Watson), Amy (Florence Pugh) and Beth (Eliza Scanlen) are four very different sisters coming of age in post-Civil War Massachusetts. Meg is the eldest March sister and the romantic who pursues every avenue to find her husband and settle down with a family. Jo is the leader of the quartet, a strong-minded, hyper-independent tomboy who has set her sights on living in New York City and becoming a famous writer. Beth is the sweetest of the bunch, a shy homebody whose frail build and large heart leads to her contraction of scarlet fever from which she never recovers. The youngest March sister Amy, equally as strong-willed as Jo, carries on her shoulders the family's hopes for at least one daughter marrying rich; she may be boy-crazy, but she learns early on how to harness her beauty as a strategic muscle under the tight-fisted tutelage of their spinster aunt (Meryl Streep).

The film opens with Jo as an adult, struggling to survive as a live-in teacher at a boarding house where she writes when she isn't working or flirting with the German tutor (Louis Garrel). She attempts to sell stories for extra money, but her work is often deemed "too violent", particularly from a female author. When word arrives that Beth's health is declining quickly, Jo rushes home to Concord where her tender-hearted mother "Marmee" (Laura Dern) welcomes her help. Meg has married for love and lives meagerly with her husband and two children close by; Amy is traversing Europe, taking art classes while she hunts for a wealthy husband.

With the girls back under the same roof, reminiscing ensues, and we are taken back to years prior, when, as teenagers, they spent their time putting on plays at home and staying up late, laughing and gossiping as only sisters can. Their neighbor Mr. Laurence was a beneficial presence, gifting them Christmas meals and a piano for Beth, and his nephew Laurie (Timothée Chalamet) was puppy dog smitten with Jo, though she saw him only as a best friend willing to do all the boyish activities outside her sisters' interests. Marmee put her energy towards the war efforts, distributing supplies and checking in on local families living in squalor.

As childhood came to an end, the sisters went their separate ways, allowing their various choices to dictate their fate: Meg to a modest marriage, the reality of which she struggles to accept. Jo to New York to pursue her dream of becoming a bonafide write, and Amy to Paris where she hunts for a new last name and a ticket to high society. Beth suffers for years until her ultimate death draws the family back together and pushes the shortness of life into perspective. Old wounds can finally heal, and the girls become young women.

You may be hard-pressed to find a woman over the age of 25 who hasn't read "Little Women" or, at the very least, seen the 1994 film starring Winona Ryder and Christian Bale. Despite the age of the novel, the timelessness of the sisters' plight and the fight for their independent futures is universal, surviving through each generation. Gerwig's film stays true to the spirit of the source material but updates its structure, condensing the story in places that no longer hold and strengthening it in others that resonate most with 21st century audiences. For example, Amy - who is without a doubt - generally the most hated of the sisters (and for good reason, the snot-nosed brat), is written by Gerwig and portrayed by Pugh with far more depth than the book ever gives her credit for. There is a steely resolve and worldly savviness we can admire in a character that once had very few redeeming qualities, and it is, much to everyone's surprise, her character that leaves the greatest mark.

However, Ronan and Chalamet, who also starred as love interests in "Lady Bird", are the ringleaders of the film. They use their combined chemistry and individual acting prowess to keep alive and robust the energy that carries the film. Ronan oozes Jo March from every crevice and corner of the her time on screen, so much so that it will be difficult for anyone to match her understanding of and obvious camaraderie with the character. Ditching the stodginess that often envelops monotone period pieces, "Little Women" swirls on screen in vibrant hues and will surely entice a new generation of young girls to put down their iPhones and willingly transport back to an age of a strict society, but equally strong women.