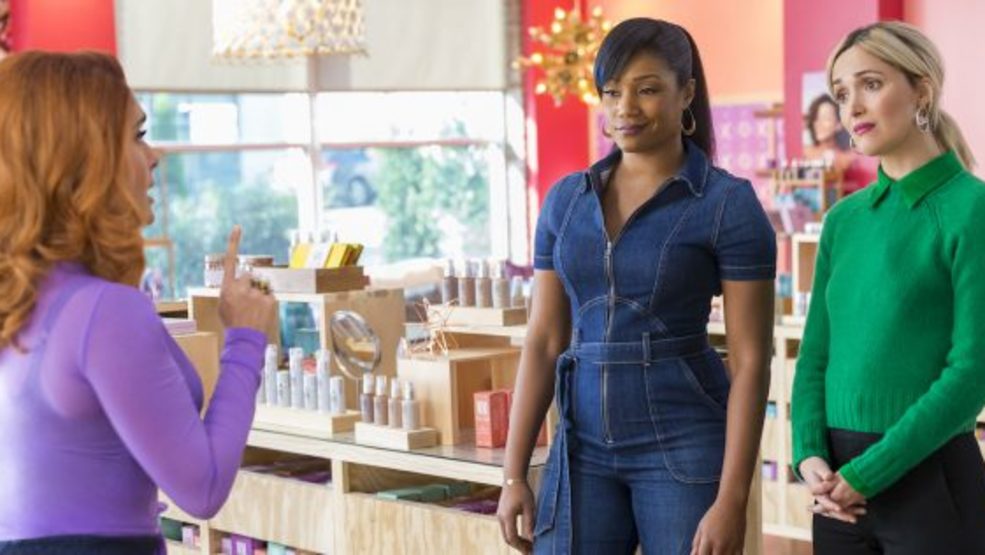 Tiffany Haddish and Rose Byrne in 'Like a Boss'.
SEE MORE

Review: 'Like a Boss' is the decade's first mindless comedy, surely won't be the last

The decade's first mindless comedy didn't take too long to rear its ugly head, and it goes by the title "Like a Boss".

"It" girl of the moment Tiffany Haddish stars alongside Rose Byrne, a face familiar to comedy fans from her roles in "Bridesmaids" and "Neighbors", as best friends and "non-sexual life partners" Mia and Mel, two entrepreneurs looking to make it big in the beauty industry. They own a storefront that is hemorrhaging money, and their adult-ing friends with children and high-paying careers worry that the pair will never give up their weed-smoking, one-night-stand ways.

When mega girl boss and cosmetic industry icon Claire Luna (Salma Hayek) wants to wipe away their debt and invest in their company, Mel, the company's manager and accountant, jumps at the opportunity - while Mia, the creative force, is hesitant to sign away their life's work to a cut-throat CEO who wields a golf club at drones that inexplicably roam the airways of her modern office building. Mel's pragmatism wins in the end, but in order for Claire to give them the spotlight at her next unveiling event, they must develop a new product that is guaranteed to wow consumers.

As they struggle to get along under the immense pressure and watchful eye of their new boss, Mia and Mel put their friendship on the line for the shot at striking Sephora gold. After following Claire's orders, including firing their friend and employee Barrett (Billy Porter), the duo still can't convince her to propel them to a featured brand under the umbrella of her conglomerate. She goes instead with a misogynistic straight male team (Jimmy O. Yang, Ryan Hansen) who believe in hiding women behind caked on make-up in order to "Get Some", which is also their official tagline. The contract they signed, however, awards Claire nearly half of the women's company, and, should one of them quit, the entire company would go to Claire. Her scheming works. After 20 years of friendship, can Mia and Mel survive Claire Luna?

From there, it pretty much goes about as predictably as a snowfall in summer. Mia and Mel reunite, realizing that they are stronger together. Sappy friendship montages, a new heartwarming product, a cheesy song and dance closing number and the end message that women who stick together can champion the world "like a boss".

But "Like a Boss" is more like a mess, a forgettable film that falls flat with a script that feels false and forced. Haddish lends her usual schtick in an attempt to attract audiences, but apart from a smattering of jokes, there isn't much runway for her to take off. The light shines brightest on Porter and fellow bit player Jennifer Coolidge, who employs the ditzy character at the top of her arsenal.

This one-note star vehicle with a penchant for cliche and little regard for developing the world and the characters in it is sure to delight those who don't care about plot and who are entertained easily by stale jokes and overblown situational humor. (Haddish's Mia not only jumps off a roof into a pool, but she also nearly falls from a top floor into an open atrium, saved by a banner and the security team after her.) There are times here and there in the film when you may think plot is being developed to flower by the end. But they bud without ever blooming, leaving nothing for audiences to sift through except watered-down humor and a wilting premise.