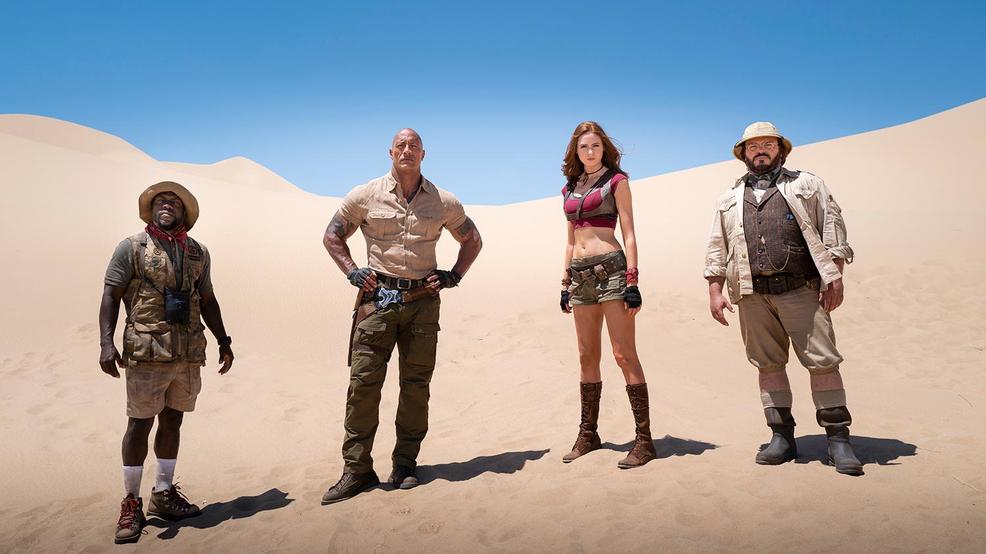 Review: 'Jumanji: The Next Level' is basically 'The Dwayne and Kevin Show'

In a move that surprised no one, Sony quickly greenlit a sequel to 2017's "Jumanji: Welcome to the Jungle" after the film reached nearly one billion dollars in worldwide box office. Out today (Dec. 13), "Jumanji: The Next Level" is that sequel, an unimaginative, paint-by-numbers film that avoids originality like a stampeding ostrich and reminds audiences that this is merely a re-run of "The Dwayne and Kevin Show", with a few big-name guest stars and a splattering of new jokes.

Set two years after the first film - which saw four high school students evaporate into a video game called "Jumanji", inhabit comically dramatic avatars and solve a series of clues to master the game in order to return to the real world - "The Next Level" finds the foursome home from college for the holidays. While Martha (Morgan Turner), Bethany (Morgan Iseman) and Fridge (Ser'Darius Blain) are in good spirits, Spencer (Alex Wolff) is having a tough time adjusting to life at NYU. He and Martha are on a break, and he returns home to find grandpa Eddie (Danny DeVito) has moved into his bedroom while he recovers from hip surgery.

Depressed and lost, Spencer makes the rash decision to dust off Jumanji, which he salvaged and hid from the others in his basement, and lose himself in the game. The others eventually catch on and enter the virtual reality to save him, accidentally bringing in tow grandpa Eddie and his ex-business partner Milo (Danny Glover). Though the avatars remain the same, the users have switched around. Martha remains martial arts expert Ruby Roundhouse (Karen Gillan), but Fridge is now overweight cartographer Sheldon Oberon (Jack Black), Milo is vertically-challenged zoologist Mouse Finbar (Kevin Hart) and grandpa Eddie is their uber-muscular leader Smolder Bravestone (Dwayne Johnson). Bethany doesn't make it to Jumanji with them, instead seeking the help of the game's former captive (Colin Hanks).

The script makes a point of trying to establish just how different this Jumanji's set of challenges and locations are from their first go of it. At some point a character comments on how the world looks nothing like the one they defeated two years prior. But you can't stick them in rolling hills of a dry desert and call it exotic. Their mission may be different with new clues and obstacles; the avatars may have to tap into new impressions, (the best, of course, being Hart doing Glover's long, aloof drawl and Johnson attempting DeVito's crass bark), but the setting itself - as well as their mission - could very well have been recycled from the last film to this one.

Eventually they find Spencer, who has taken on the avatar of pickpocket extraordinaire Ming Fleetfoot (Awkwafina). Together again, they finish the game, tracking down a large gemstone from <insert gruff and mangey scar-faced villain> who, this time, goes by the name Jurgen the Brutal (Rory McCann) and returning it to its rightful owners, thereby restoring peace in Jumanji and sending them back to Spencer's basement.

Perhaps doomed from the start, destined to be overshadowed by its hyper popular and successful predecessor, "The Next Level" is the same schtick in a new dress, re-packaging what made the first one so original by slapping on some familiar faces and praying for rain at the box office. Which is, you know, the entire point of this sequel: to suck as much money out of the property as they can. The inventive, interesting route for this film to take would have been, for example, to send Jumanji into the real world, like the original, Robin Williams-led "Jumanji" did.

But that would mean losing the star power that keeps this ship afloat (or at least profitable), which goes by two names: Johnson and Hart. Their dynamic is the driving force once more. Throwing in power players like DeVito and Awkwafina doesn't hurt, and they garner enough laughs to distract you momentarily. But it's not enough to make the film feel fresh, hopefully closing off the property to any thoughts of turning it into a trilogy.