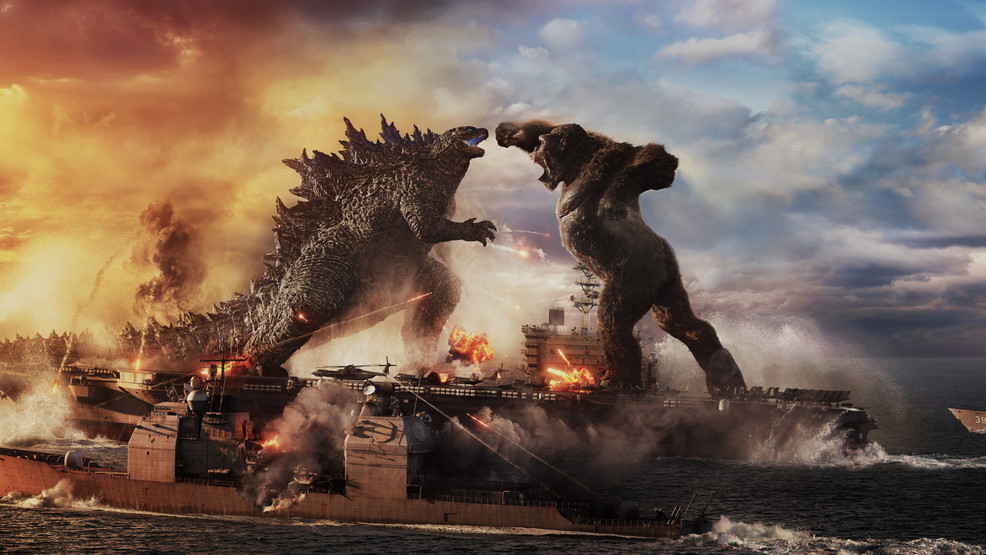 Review: 'Godzilla vs. Kong' is a gargantuan mess of a threequal

We've seen it before: a lauded, albeit outcast hero from one film is suddenly the misunderstood villain in the next. It happens to Batman, sometimes mid-movie, oscillating between hunter and hunted despite his serviceable intent. Gerard Butler's outlandish action star Mike Banning fell prey in the last "Has Fallen" movie. The latest to join that list is "Godzilla vs. Kong" a gargantuan mess of a threequal that finds the giant lizard internationally praised for defeating 2019's siege of radioactive foes in "Godzilla: King of the Monsters", back already to fight a bad guy, fight a good guy, fight for his reputation, but at no point do we fight our urge to laugh at its absurdity as we lament the film this could have been.

Straight out the prehistoric gate, it is obvious that frequent action sequences, savvy CGI work and a multitude of new, visually appealing settings are prioritized over the succinctness and plausibility of the film's plot, as well as the further character development of our massive leads. In all his blue-fire-breathing ferocity, Godzilla attacks, allegedly unprovoked, a laboratory belonging to Apex Cybernetics Corporation, a business with lots of fishy high-tech thingy-ma-dos and hidden underground testing rooms. Their shady dealings inspire a podcast hosted by one of its employees (Brian Tyree Henry) dead set on exposing Apex for its sinister mega plans.

The backlash on the lab's destruction is swift, and Godzilla is promptly vilified by the public he once saved (twice). Experts are now worried for King Kong's safety as the last known surviving titan. He has been kept in a glorified cage that imitates his Skull Island habitat and is overseen by Dr. Andrews (Rebecca Hall) and her adopted daughter Jia (Kaylee Hottle), an orphan and Iwi native who has formed a strong bond with Kong. She and the monkey communicate via sign language, making her the only known person to have some control over the monster.

And instead of fleshing out this idea - Godzilla seeking Kong, the crew attempting to hide him away, the increasing instability of Skull Island, etc - the absurdity is double downed with another harebrained, blink-and-you-won't-understand science impossibility: "Hollow Earth".

To be fair, the Hollow Earth theory has been flung around this Monsterverse for some time. For example, it is used to explain how Godzilla can travel the world so quickly, and delineates the origins of Kong's ancestors. Basically the theory posits that across the globe are portals that lead down into other worlds within Earth itself, filled with exotic flying reptiles and ancient beasts, gorgeous sweeping topography that has its own light source and ecosystem. Jules Verne's "Journey to the Center of the Earth" details a similar place his protagonists discover, and some believe Shakespeare has even alluded to Hollow Earth in his prose. So it isn't a new thing; in fact, this recent string of Godzilla and Kong films have been building audiences up for this trip with subtle mentions throughout.

Anyways, Apex CEO Walter Simmons (Demián Bichir), a modern, suave incarnation of a spindly-mustached, moneybags cartoon villain, hires Nathan Lind (Alexander Skarsgård), a local professor and published expert, to lead an expedition into Hollow Earth via an opening in Antarctica. Simmons is secretly building Mechagodzilla, an animatronic Godzilla replica that uses a head from the three-headed, extraterrestrial adversary King Ghidorah that Godzilla defeated in the last film to grant telepathic control over the mechanical behemoth to anyone wearing the user helmet. The one piece Simmons is missing to make Mechagodzilla a worthy opponent to the real 'zilla is a power source which, they surmise, must only be available in the place where the titans were created... Hollow Earth.

Feeling overwhelmed by convoluted and improbable plot work? Are you experiencing symptoms of feeling lost and confused? You are not alone, and I am here to help. Do not watch "Godzilla vs. Kong" if you are prone to feeling inadequately prepared to digest dense, imaginary scientific theories. Avoid if you are susceptible to disappointment with Godzilla's underwhelming representation on screen. Side effects include fatigue, disorientation and propensity to ask your viewing partner a million annoying questions.

More happens, but the logistics are too Byzantine to bear. Millie Bobby Brown and Kyle Chandler return to their roles as anxious, brass well-doers. Eiza González stars as Simmons' daughter and henchwoman who gives a lot of sass, struts around the screen in designer clothes, but is otherwise given no interesting, multidimensional purpose.

The trip into Hollow Earth should have been the main event. It is a lush, intricate world with metaphysical impossibilities that remained untapped in its potential for fun. At the very least, the film should have gotten us there faster than it does. Instead, there is too much time dedicated to transporting Kong to Antarctica and an ensuing battle with Godzilla out at sea which ends, quite comically if you're prepared to laugh at the film's banality at this point, with the reptilian king all but killing the gorilla. He is tricked into leaving Kong injured, but alive, by the ingenious idea set forth by one of the scientists: if you kill the engines on the ships and "play dead", Godzilla will be fooled into calling the battle prematurely.

Yes, a supernatural, nuclear-powered being that can scout another predator from around the world is tricked into thinking his prey has died because the lights went off.

The mechanics of a monster film require a certain extension of disbelief. You can't look too closely or pull out your physics dictionary at every turn if you want to truly experience and enjoy a large budget, high concept bonanza. The genres of science fiction and fantasy invariably set their own rules for the game. The game in "Godzilla vs. Kong", however, fails to establish an interesting volley of ideas to balance out the outrageous distance we as the audience are flung. If we're sticking to the sports metaphor, send the verdict to the umpire, but I am most certainly "OUT" on this one.

"Godzilla vs. Kong" is available to stream on HBO Max.