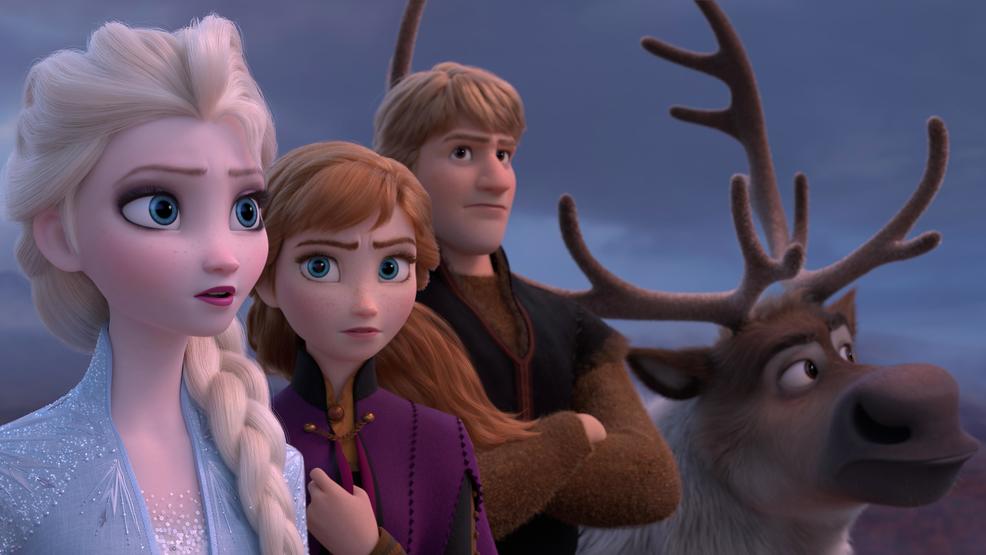 Review: 'Frozen II' is wonderfully adult-leaning, though a bit scarier for young kids

Young children the world over (and parents who endure "Let It Go" raging through their heads in every quiet moment of the day) have been waiting since 2013 for the release of the highly anticipated sequel to Disney's runaway hit "Frozen". Luckily for adults bracing for another four years in constant blue dresses and white-haired wigs, the music is enjoyable - hey, we would have accepted "mildly tolerable" at this point - and the plot offers more for the grown-up crowd than the first (while still managing to please its target audience).

Though it's taken six years, "Frozen II" brings us back into the lives of Queen Elsa (Idina Menzel), her sister Princess Anna (Kristen Bell), Anna's boyfriend Kristoff (Jonathan Groff), his reindeer Sven and their lovable pet snowman Olaf (Josh Gad). They live seemingly happy lives ruling over Arendelle, the kingdom they saved from eternal winter and the nasty grasps of a scheming foreign prince. Now, they sing in the streets with their subjects and, at night, they play charades contentedly. That is until Elsa hears a mysterious voice calling to her from the unknown.

When Arendelle is overtaken by ancient spirits that once ruled the land and her people are forced from her kingdom, Elsa seeks the source of the voice calling to her, though of course, her trusty companions won't let her wander into the fog-fenced enchanted forest alone. The ragtag group finds what is left of an ancient society, the Northuldra people, who have lived off the land and befallen hardships at the hand of Arendelle troops.

Both parties have been trapped in this magical fog for decades, leading Elsa on a quest to uncover the origins of a family she never knew, on a dangerous passage to unearth secrets long since buried. Only once she understands what has happened in the past can she use her gifts to help right a major wrong and unite two kingdoms.

"Frozen" worked as well as it did for doting 5-year-olds namely because the premise was simple: girl feels like an outcast, alone and weird; sister loves her anyways. The villain was a nice-looking man who, apart from the danger he posed politically, didn't instill fear the same way that generations of kids were traumatized by, say, Maleficent's fire-breathing dragon alter ego or Ursula's wild hair, purple eyes and freaky tentacles.

"Frozen II" offers many more opportunities for young children to cower into their parent's armpits. The film's main antagonist is actually the four elements: earth, water, fire, ice. Rough waters toss Elsa around, forcing her under for long periods of time. Anna almost dies in bewitched fire. People run for their lives as the earth rattles under Arendelle. And, of course, Elsa's greatest fight with the element she controls may make her as a block of ice forever. A young child may not be able to translate the minutiae of political dominance, but she can easily understand being trapped underwater, far from a trivial fear.

Olaf gives a recap of the first film in a scene that garners the most laughs, mainly from parents who can understand the sarcasm and dramatics employed. In fact, Olaf is a centerpiece this time around, and it's for the best. His comic relief is necessary to lighten Elsa's constant gravity.

If it doesn't sound like "Frozen II" is as adult-leaning as it is, then just wait for the song "Lost in the Woods" that's performed and animated as an 80s music video sequence starring a moody, hair-flipping Kristoff with a tune that seems to closely mimic "Will You Still Love Me?" by the band Chicago. The film's powerhouse single, "Into the Unknown" is short, but powerful with a strong beat and catchy tune that is guaranteed to make it this year's preschool drop-off anthem.

If you're wondering if your child will enjoy "Frozen II", I'd say it's hard to disappoint a child who loves these characters. There is plenty of music and dancing as well as cute animals and funny moments to keep his/her interest. The beauty of this sequel is that it is more intricate than the first, namely in plot. It ditches the simplicity of what boiled down to repairing a sister-sister relationship and opts instead for lofty, complicated concepts in a children's movie. But what is most gratifying is that we are finally given some understanding of the magic that Elsa has. There is an explanation for her abilities, a history and an origin story that ties the film to the first while also expanding its universe.

In so many words, it will hopefully allow us to retire "Let It Go" and graduate "Into the Unknown".