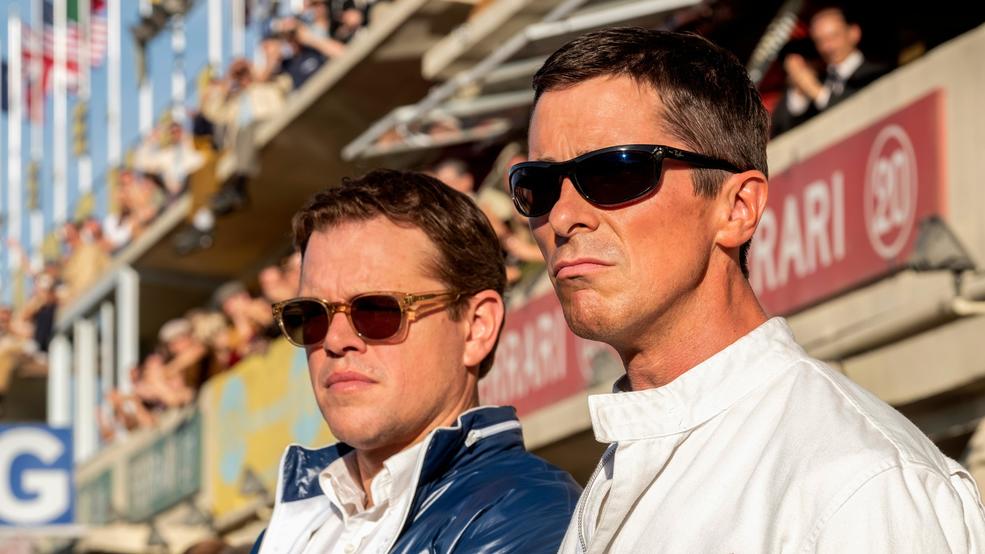 Review: You don't have to like cars to enjoy 'Ford v Ferrari'

With Oscar season kicking into high gear, it seems only fitting our next obvious contender for a gold trophy sticks the pedal to the metal in a high-octane true story that, despite a slow start, finishes with all the finesse and beauty of the prettiest car on the lot. With "Ford v Ferrari", there's a little bit of something for everyone: the biographical element for fans of non-fiction, A-grade acting by two of the industry's most talented, comedy sprinkled throughout, and, for the gear heads, very, very, very fast cars.

Christian Bale stars as Ken Miles, famous sports car racing engineer and driver with a sardonic sense of humor and a way behind the wheel that can't be matched. He's spinning his wheels in California, barely supporting his wife (Caitriona Balfe) and son with his auto body shop and the meager prize money from his wins at the local track. With his thick Brummie accent and hot temper, Miles doesn't win himself many friends amongst the judges or his competitors, though he does have one person willing to overlook his rough edges.

Matt Damon stars as that person, Carroll Shelby, a famous driver in his own right who has retired due to health reasons. He's turned to designing race cars and has made quite a name for himself. So when the executives at Ford Motor Company (Tracy Letts, Jon Bernthal, Josh Lucas) dictate that the future of the company relies on an image rebranding a winning vehicle at Le Mans, the world's oldest active sports car race - they first seek to buy Ferrari, a company that (despite its highly regarded name) is in financial ruins. When that falls through and insults are hurled, Ford turns to Shelby to engineer a sports car that can rival what has long been considered the premiere brand in endurance racing.

There is plenty of trial and error leading to epic crashes and burning cars. Miles is the willing test dummy, a car aficionado with the invaluable talent of feeling a problem with the vehicle and the incredible ability to diagnose it. With only 90 days to prepare, it's no shock when Ford doesn't hold a horsepower candle to Ferrari. It doesn't help that Miles' notorious attitude brands him as "not a Ford guy", and he isn't allowed to step behind the wheel.

But with failure often comes clarity. Determined to build a better, faster car equipped to handle the grueling 24 hour race (yes, you read that right - TWENTY-FOUR HOURS of racing), Shelby and Miles perfect their work while battling the frustrating politics raging in Ford's boardroom. Miles drives Ford to victory at 24 Hours of Daytona, another day-long endurance race, securing his seat behind the wheel at the epic showdown in France where Ford is finally prepared to take on their great Italian rivals.

With James Mangold in the director's chair, "Ford v Ferrari" does for racing movies what his 2017 film "Logan" did for the super hero genre: he humanizes this true story, making it interesting for those with extensive car knowledge and palatable for others, like this reviewer, who wouldn't be able to locate the engine with a gun to her head. There is plenty of jargon and technicalities that will fly over the layman, but the heart of the film lies in the relationships. Bale and Damon portray Miles and Shelby with the precise mix of bravado and subtlety that make them electrifying to watch, and their chemistry is iron hot.

The film itself warms up slowly, and it's Miles' family that takes front seat initially. Balfe has the rather uninteresting task of portraying a woman standing behind her man with equal parts concern and encouragement, flipping open a lawn chair to get the best view as Bale and Damon go head to head. This happens in the film with her character quite literally watching on as the boys fist fight, and the allegory couldn't be more appropriate. Her heavy presence in the film feels like a mad grab at diversity, which is all well and good. Balfe is a talented actress we enjoy on screen. But if we're being honest, "Ford v Ferrari" is all about Bale, Damon and the most important woman in their lives: whichever speedster they're greasing up and giving gas.