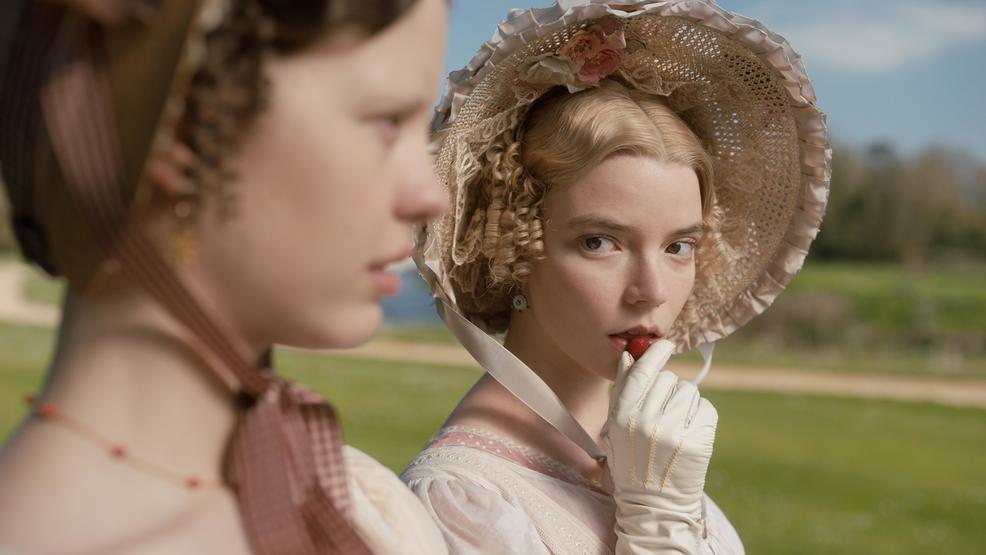 Review: 'Emma.' sets a spritely pace that doesn't lose its luster along the way

It's rare to experience as much joy from a period piece as I did in "Emma.", the latest Jane Austen adaptation. Unlike the drab and dreary, by-the-books, costume-ridden womp womps that take themselves far too seriously, "Emma." sets a spritely pace that doesn't lose its luster along the way, while still highlighting the social commentary Austen sprinkled in all of her work with her witty words and outrageous characters. This version of the 1815 novel is bright and exuberant, largely thanks to the visionary eye of director Autumn de Wilde in her feature film debut and the smart, intimate, but piercingly funny script by first time screenwriter Eleanor Catton.

Anya Taylor-Joy stars as the titular character Emma, the self-anointed matchmaker in town who, despite being pretty and rich, has no interest in marriage. This is a common theme in Austen's work: the strong female lead who cares naught about what is expected of her and does what she wants for herself. Emma however, veers from the mold in that - unlike Lizzie Bennet with no family money to inherit - Emma comes from high society and isn't short of prospects. She cares what the world thinks of her in every other way, ensuring her hair is perfectly curled and pinned and her clothing the latest style, but still she loathes the idea of leaving her hypochondriac father (played by the effervescent Bill Nighy in one of the film's greatest comedic roles) for a husband - though that is, by the standards of her society, the greatest achievement a woman can hope to attain.

The role of Emma is a complicated one: she is non-frivolous but also ridiculous in her set beliefs - and she is often too self-righteous, self-assured and selfish to watch amiably. Taylor-Joy walks the fine line of portraying Emma with earnestness and hyperbole, softening her edges just when we yearn to see a glimpse of her raw underbelly. Emma finds a dear friend in Harriet Smith (Mia Goth), a beauty without brains but a heart as soft as butter left on the counter. She clings to Emma, seeking her advice on love and requiring her approval for every decision she makes.

The only person who seems to hold Emma accountable for anything is Mr. Knightley (Johnny Flynn), whose brother has married her sister and is often at Emma's palatial estate to check in on her and her father or else, it seems, merely to shoot the bull. When the mysterious Mr. Churchill (Callum Turner) finally makes an appearance in town, for the first time Emma throws her own heart into the mix. What she finds when she opens herself up is not what she had expected.

The rest of the film fits what you might find in most of Austen's stories: mismatched lovers, a ball with dancing and very light touching, miscommunication, a really icky vicar, long walks from one estate to another, a clandestine engagement and, of course, several happily ever afters. British comedienne Miranda Hart steals laughs in every scene she graces, and Nighy, with his wink and grin delivery, is a real treat to watch lighten very old material. The film would be nothing, however, if our Emma were not every bit strong and pretty, nuanced and unflattering, and Taylor-Joy tackles the character's complexity with a naturalness that you would think she has been preparing for all her life.

The story itself is hardly new, but despite being over 200 years old, "Emma." has never felt so fresh. de Wilde's propensity for highlighting color and allowing our eyes to linger on the many details of the early 19th century set and wardrobe makes the two-hour runtime a sumptuous feast. Many shots have the visual appeal of a classical portrait, the camera's frame pausing on perfectly manicured faces, or necks contorted in unnatural positions...only to have mouths open and the moment broken by a funny word or situational joke. The duality of "Emma." is just this: it is proper in its depiction of life in 1800s England, each rule of etiquette in place, but the modern rhythm and flow from scene to scene and between characters is, in the words of Jane Austen, "handsome, clever and rich".