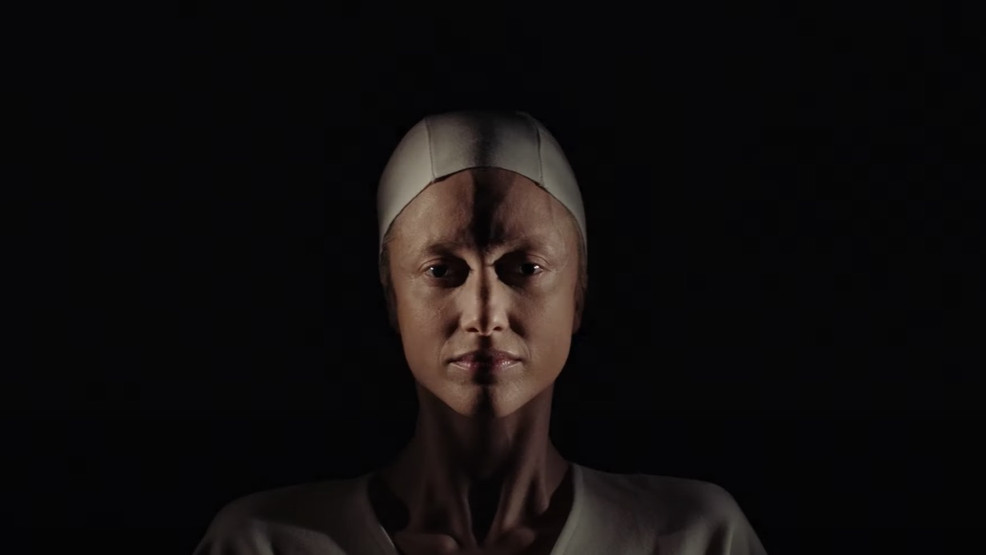 If there is a word to the wise as far as the new film "Possessor" goes it would be this: don't watch with food in front of you. Or in your stomach. Or, really, anywhere nearby that could come to mind mid-viewing.

The new psychological thriller by Brandon Cronenberg, son of the famed body-horror cult filmmaker David Cronenberg (commercially best known for "The Dead Zone" and the 1986 remake of "The Fly"), is gory. Quite gory, actually. But it is more than that. It is not just the close-ups of a knife piercing the skin of a victim's neck as blood pours from the newly made orifice, though there are plenty of such shots. It isn't the Shakespearean tragedy that ensues in the hard, real way. No red silk scarves to represent a character's final demise.

Instead, it is the visceral images: flesh melting then reforming like malleable wax; a face being pealed off only to be worn by someone else. Those leave your stomach turning. And it is the entire premise that initiates an uneasy feeling, like the rug beneath you is primed for being pulled at any minute. Set in the future, humans live in a flat, dull world. Society is driven by employee output and industrial enterprise, reminiscent of a dystopian film from the 80s, except the world and its people still look and feel contemporary, like perhaps it's an alternate reality to our own, tweaked in just a few places, albeit places that matter.

Tasya (Andrea Riseborough) is an assassin who uses new-age, brain-implant technology to inhabit other people's bodies to kill. She and the corporation she works for a discreet option for the wealthy elite who can afford such a complicated, clandestine operation. Despite the highly complicated, sci-fi aspect of the murder-for-hire (a device must be placed into the base of the host's neck), it is a surprisingly predictable job: takeover the host, kill the target, then kill the host and return to her own body.

Though a veteran of the craft, Tasya is beginning to have a breakdown. The professional life she leads is incomprehensibly deranged, and the psychological toll moving from body to body, only exiting her victims by a self-inflicted bullet to the head, is abetting her mental decline. Upon returning to her own body, her overseer (Jennifer Jason Leigh) tests her with items from Tasya's life, ensuring all of her (mind? soul? it's unclear) has returned. She has to practice her tone and inflection before interacting with her family, like she can't remember which part she is supposed to be playing.

It is her next assignment Colin (Christopher Abbott) that escalates her unraveling. Colin is dating Ava (Tuppence Middleton), the daughter of a CEO of a multinational corporation that seeks to collect data on unsuspecting citizens by accessing the webcams on their computers. (Note to self: cover webcam immediately.) Right off the bat, "possessing" Colin is a change for Tasya. As she inspects the male private parts and his masculine features, it is obvious that inhabiting a man is not that common for the assassin. She is, right off the bat, out of her comfort zone.

This is where we see the big acting guns from Abbott who must convey Tasya's presence without dialogue or any other hint from the script. He tweaks his voice and body posture when his girlfriend questions his unusual optimism, and we can feel him, on the spot, analyzing what's working and what's not. This is fun and a bit exhilarating, the hiding and seeking. As the viewer, we try, often in vain, to identify when Abbott is Colin and when he is Tasya which is Cronenber's intention and the beauty of his film. The film pulses with constant ambiguity. We have no sense of who Tasya really is or what matters to her. She thinks, perhaps, that her family is important, that she means to love and protect them, but then she does something reckless like visit her home while in Colin's body, giving him access to that personal information, which of course comes back to hurt her as she further loses herself into this foreign body. The line between Colin and Tasya is fluid, begging the metaphysical question: what is the human experience, and what defines oneself? Are we just atoms? Neurons? Or are we more than that?

I've asked more questions in a film review than I have ever before. But don't expect the film to answer any of them. The obvious, often frustrating, flaw in Cronenberg's existential conundrum is that he doesn't make a statement either way. The facts remain steadfastly sterile in their honesty. People kill. People die. Regardless of the technology that makes it happen, other people's lives are but a dream. Regardless of their internal struggle, there is no telling what is real for them or what is simply our perception of their reality.

"Possessor" is available on Video On Demand.