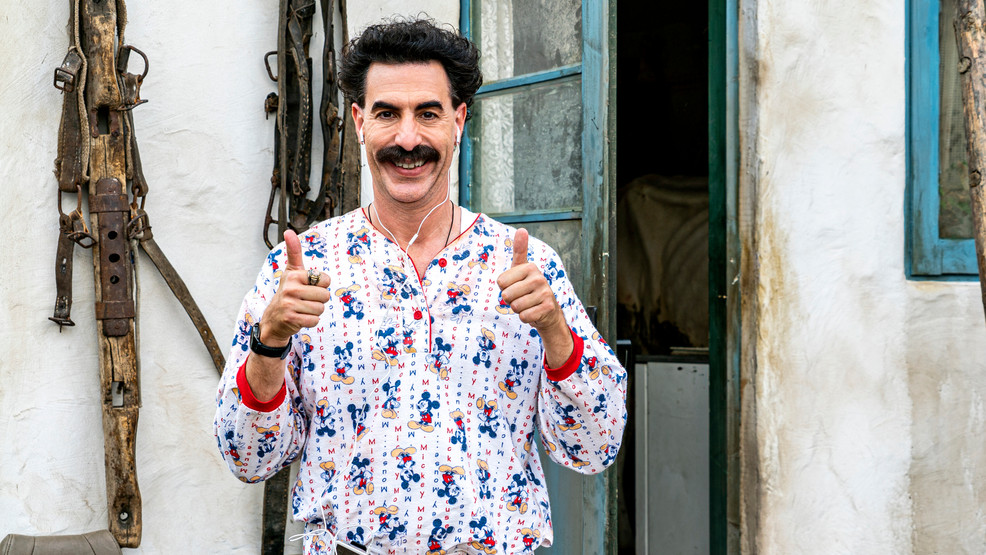 Review: 'Borat Subsequent Moviefilm' will rile up some, alienate others

For those of us that were lucky (and old) enough to see the original "Borat" film in theaters, it is hard to forget the surprising way it made us laugh. Sure, the gags were hyperbolic and...well, gaggy. But there was such a sincerity to Sacha Baron Cohen's character and an innate truth to the points he was making, however ridiculously, that it was near-impossible to leave without feeling somewhere in the range of authentic amusement and laugh-crying inconsolability.

Fourteen years later, Borat (and Cohen) are back in a sequel with an even longer official title - "Borat Subsequent Moviefilm: Delivery of Prodigious Bribe to American Regime for Make Benefit Once Glorious Nation of Kazakhstan" - that seeks to rile up an audience, but more likely will only work to alienate some of its viewers. What was so charming and heartfelt about the first film was that it picked on American idiosyncrasies, highlighting the hypocrisies and, often, the weaknesses that were unique to being American.

In his follow-up, nicely timed with the impending, highly contentious presidential election, Cohen sends his iconic character back to America. The premise is that the film from 2006 brought international shame to his homeland of Kazakstan. In order to right his wrongs, Borat must return to the "US&A" with a gift that will impress our leaders and bring his nation glory once again. He takes the slow boat around the world, and eventually docks in Florida. Upon opening the crate that transported a famous monkey he was going to gift America's leaders, he learns his teen daughter, Sandra Jessica Parker Sagdiyev (played by Bulgarian actress Maria Bakalova who keeps up with Cohen in every scene and has female balls of solid steel for never breaking character), not only traveled three weeks in a wooden crate with a monkey, but she killed the chimp for survival. The barbaric international voyage was preferable to remaining caged up and treated like livestock in Kazakstan.

With the monkey gone, Sandra Jessica Parker must take its place as an offering to Vice President Mike Pence whom Borat deduces is a "ladies' man". The duo, like Borat and his producer Azamat (Ken Davitian) of the first film, embark on a journey to various cities, pushing the limits of people's patience and gullibility.

Like at the bakery in the Carolinas where Borat asks the worker to write, "Jews will not replace us", which she does, embellishing with smiley faces, perhaps a nod to the many bakers who have turned away gay couples seeking wedding cakes, but who might, hypothetically, spell out something bordering anti-semitic.

Or the next stint at the "Women's Health Center" where Borat's daughter tells the presiding pastor, "I have a baby inside of me, and I want to take it out of me." (The baby is a small plastic decorative adornment she accidentally swallowed while eating a cupcake at the aforementioned bakery.) As the gag continues, Borat admits to being "the one who put the baby in her", and as the pastor is confronted with a case of incest and statutory rape, he is still mostly concerned with "the life God has created."

And there are plenty of one-liners and quick gags that pack a mighty punch. When shopping to outfit his daughter in American garb, Borat makes a clothing store owner laugh when he asks for the "No Means Yes" section. To report back to his boss in Kazakstan, Borat visits a UPS store where he begins a fax back and forth with a one-word message ("Sup"), just because it's a funny bit. In such situations, the film feels like the old Borat, the one who inadvertently fought social injustices like anti-semitism, racism and misogyny while wearing a thong and spewing memorable catchphrases like, "Wawaweewa! Very nice!"

Then we see what made headlines when he was filming. He dresses in a fat suit and sneaks into a rally where, donning a Trump mask, he shoves his daughter towards the stage yelling, "Michael Pennis, I brought a girl for you!" Cut to Mike Pence sternly looking into the crowd as security rushes Borat out of the room. He reportedly spent five days with conspiracy theorists, not breaking character from his Kazak journalist persona even once. This was after the pandemic had hit the US, and he agreed to quarantine with strangers who spent their pastime presumably spreading actual fake news on the internet.

It wouldn't be a Sacha Baron Cohen satire without someone suing him. There were lawsuits in 2006 as well, mainly by a gaggle of drunk frat guys that didn't like the way they were "portrayed". (Shocking: they lost.) This time, it's the family of a Holocaust survivor who died after filming and to whom Cohen, Jewish himself and frequent collaborator with the Anti-Defamation League, dedicated the film.

However, the crown jewel of "Borat Subsequent Moviefilm" that is already the talk of the town involves Rudy Giuliani, and it plays like a strange elderly porno thriller. The drop comes slowly, but when it does, it feels more icky than funny, like watching an old man lie on a hotel bed and reach into his pants while a young woman stands close-by. Wait, it's not "like that". That's actually what happens. Though Cohen as Borat storms into the room at the precise moment anything could or would have transpired, the taste it leaves in your mouth (sorry, bad, though unintentional, joke), is - and this is the most appropriate term I can find - ugh, gross.

But also, shoulder shrug. Haven't we seen it all? It sure feels like it, which is why perhaps the gags feel less "gotcha" and more, "yeah we know".

We know politicians are slimy. We know people are still unaccepting of other races, religions, etc. When Borat exposed our faults fourteen years ago, he held up a mirror to ourselves. It was shocking. But since 2006, we've grown accustomed to our reflection, for better or worse. We've seen marches and rallies held recently that encourage radicalism on the wrong side of history. It's horrific, but I don't think the average "Borat" viewer is going to argue that, and the stunts involving only the conservative politicians that don't fully expose their beliefs, the ones we should morally and ethically oppose, become more ammo for those looking to label "Hollywood" as left-leaning and out of touch with the rest of the country, two points that are, ironically, the antithesis of Borat.

"Borat Subsequent Moviefilm" is available to stream on Amazon Prime.