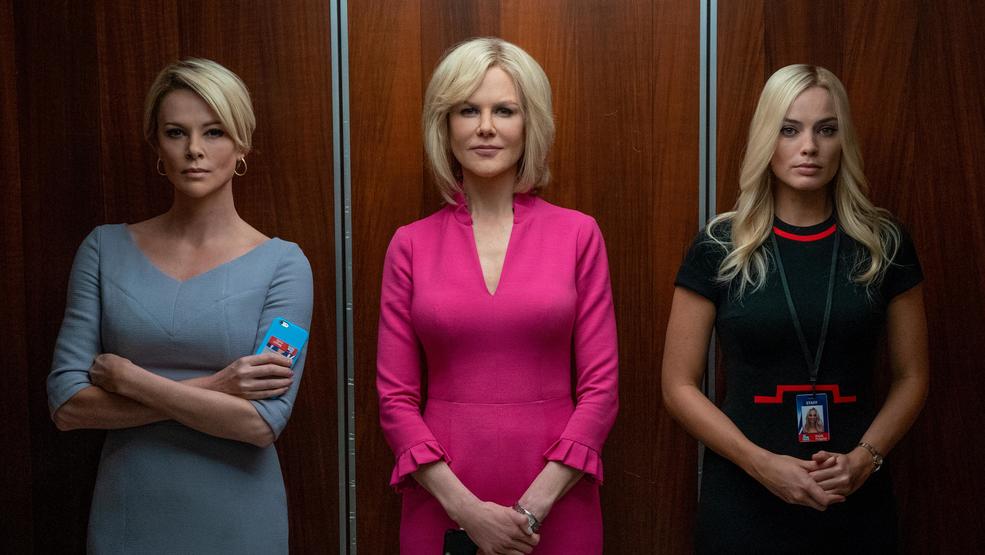 Review: 'Bombshell' retells a fascinating public scandal with a hefty hook, not much bite

It was the story of 2016: more than a dozen women accused Roger Ailes, head of Fox News, of sexual harassment. Spearheaded by the network's former on-air personality Gretchen Carlson (who sued Ailes personally), the revolution happening at the country's conservative network could be seen as a gateway to the inevitable Me Too movement the following year. It may feel like this piece of history is still too fresh, too recent to garner a clear picture - in some respects, it is. But the heart of it is obvious and where the new film "Bombshell" sticks all of its eggs, cooking up a retelling of one of the more fascinating, certainly more attractive, public scandals with a hefty hook, but not much of a bite.

Gretchen Carlson (Nicole Kidman) is an on-air personality with a headlining show in the middle of the dead zone. She is struggling to let her voice and opinions be heard without stepping on the far-right toes of her overseers, and her complaints about sexual harassment in the workplace go ignored. Megyn Kelly (Charlize Theron) is Fox News' "it" girl. She's their primetime headliner who is finally at the big show: moderating a presidential debate. But when Trump personally attacks her for the hard-hitting questions she threw his way - who can forget his "blood coming from her wherever" comment? - her family is put at risk and her life is turned upside down.

The only major character in the film who doesn't exist in real life is Kayla Pospisil (Margot Robbie), a doe-eyed, shapely-manicured blonde who clutches her silver cross and preaches Fox News' praises. She is an employee who moves off Carlson's show and onto the network's bread and butter, "The O'Reilly Factor". She quickly befriends Jess (Kate McKinnon), a liberal lesbian on Bill's writing team who hides her affiliations because that's the kind of work environment it is. But Kayla doesn't have plans to stay there long. She wears her tightest skirt and bats her lashes into a private meeting with Ailes, who is notorious for making or breaking careers. What she isn't prepared for is what Ailes asks her to do right off the bat, a highly sexualized modeling turn with a peek of her panties.

When Carlson is let go, she sets her fight on Ailes himself, suing him for sexual harassment and termination from her job because she wasn't willing to return his advances. The firestorm that ensues shakes the corporation, highlighting just how toxic it is for women at Fox News. After debating her next move, fearful of what the fallout may be, Kelly eventually comes forward, helping to pull back the blinds on an environment built upon fear, tight dresses and blonde hair dye.

Charles Randolph won an Academy Award for co-writing "The Big Short" with director Adam McKay in a film that smartly told the broad strokes story of the flawed mortgage market before the American economic collapse in 2008. His stab at this scandal retains a similar style - occasional voiceover of a character's inner thoughts, characters looking directly into the camera and speaking to the audience, etc - but its lack of consistency makes for a film that doesn't know exactly what it is and where it wants to go. It tells the story with real news footage and precise reenactments of the public bits. But the film falters in its unification of the three women, whose individual stories do not come together cohesively. Kayla's fabricated existence feels particularly irksome. She is an obvious tool for further indicting Ailes as the evil villain in this narrative, but she harks on the "conservative bimbo" stereotype with too much gusto and too little substance.

Theron as Kelly is eery; she becomes the news pundit, from her physical features to her mannerisms. Much of the fun in "Bombshell" is watching Theron and Kidman, who breathe life into these real-life people in ways their on-air personas don't allow. Regardless of your political affiliation, you feel irrepressible empathy for these women, none of whom deserve the constant discrimination at the hands of influential men and a cruel, partisan public.

Perhaps that is the most surprising aspect of "Bombshell". We're left with the distinct impression that a few bad apples really can poison the bushel. The mouths that spew so much of the slanted news and opinions we abhor are, oftentimes, doing what they must to keep an income in order to provide for their families, or else to progress in a career the only way they know how. The film gives a soft, but firm voice to Kelly, Carlson and fictional Pospisil, demonizes Ailes who needs no help in that department, but otherwise offers no insight into how things have changed or, at least, how they should.