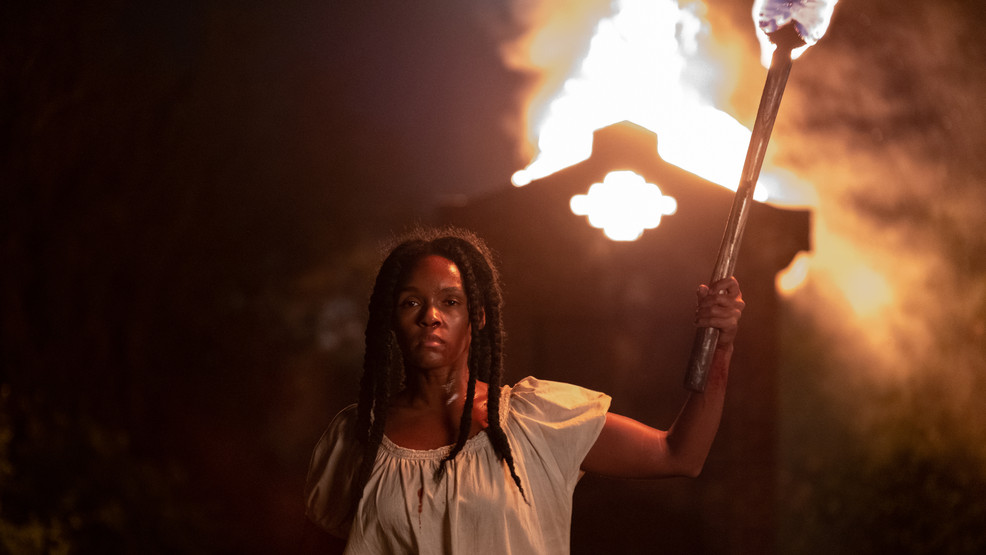 The title alone makes you pause. The word "antebellum", broken down, means "before the war", but it's hard not to feel its connotations, particularly with the social and cultural upheaval of the last few months. "Antebellum" is often used, by some, with fondness about a period of time in our nation's history where society was high, innovation was rampant...and human beings were enslaved. The word holds the power to conjure intense emotions, which is perhaps why co-writer-directors Gerard Bush and Christopher Renz chose it as the title for their latest film, an allegorical thriller that doesn't thrill so much as it seeks to make one point, over and again.

To the credit of Bush and Renz, "Antebellum" could not be more beautifully shot. The film opens with one long, continuous take shot during golden hour. The camera moves through a palatial plantation, the white inhabitants playing in the front as cicadas buzz softly. We follow a small group of Confederate soldiers as they march to the back of the house where Black slaves hang laundry, attend to their white captors and pick cotton grown in long, perfect rows. There is a scuffle which ends in a slave running desperately down the road, only to be gunned down by a white officer on horseback. He takes obvious and immense pleasure in this murder.

So sets the scene for "Antebellum". Eden (Janelle Monae) works in the cotton fields, and though she puts on a blank face in front of the white people, she is constantly scheming her escape with small, secretive acts - like religiously greasing the door to the cabin she shares with her overseer (Eric Lange) and whispering hushed, conspiratorial words to her fellow enslaved.

Speaking without permission is a punishable crime at this plantation, though the slave masters don't seem to care much about real productivity. The fact that cotton is picked at a languid rate (and that the cotton itself is later thrown into the fires) is our first indication that there is something amiss about this place. A new girl (Kiersey Clemons) arrives. She is bold and indignant, unlike most slaves we see depicted in films. Through her confrontation with Eden, it is clear there is a secret afloat, some underlying point we don't understand about this place and its occupants.

This is the key of "Antebellum": the anticipation of the drop. And actually, there are two major twists, the first being that Eden's real name and identity is Dr. Veronica Henley, a smart, accomplished African-American woman who has written a book and is a regular talking head on national news shows. Also, she was not born in the 19th century. She is loud and confident, a working mom who seemingly does it all and looks really good while doing it. Despite her accomplishments, she still faces the small, everyday snubs that come with systemic racism - a rude worker behind the concierge desk at her hotel, even though Veronica is staying in their largest suite; the worst table in the restaurant; and so on - but this is something she has dealt with all her life.

The "before" her kidnapping and enslavement gives contexts to the "after". While I won't reveal the second, very Shamalyan twist, I will say that it elicits a moment of "Aha! That was clever", but does not save the film from its many pitfalls, mainly that it prioritizes its message over its story and characters. And really, the message is moot without the others to deliver it. Gabourey Sidibe gives us something as Veronica's friend in modern day. But generally, the other enslaved are voiceless and nameless. The white captors blend together, each playing the role exactly as you've seen in the movies many times before. Even veteran actress Jena Malone who dons a hard Southern drawl and a sinister wig is left a comically cartoonish villain (who may or may not still give you nightmares).

Like Jordan Peele did with his social commentary films "Get Out" and "Us", Bush and Renz write with crystal clear poignancy about their frustration with current ideologies in our country. They lack, however, Peele's concision and depth. Talk of "saving our heritage" is a particular point of contention in "Antebellum" that reflects real-world principles. Bush and Renz show us exactly what "heritage" is being romanticized, one that includes kidnap, enslavement, dehumanization and murder. The people committing these heinous acts aren't Southern Confederates, but our fellow citizens. The atrocities have never felt closer to home. In that way, "Antebellum" may refer to the Civil War era, but it may also refer to another war, one that's been brewing for centuries and that is finally seeing fighting commence.

"Antebellum" is out today on VOD.