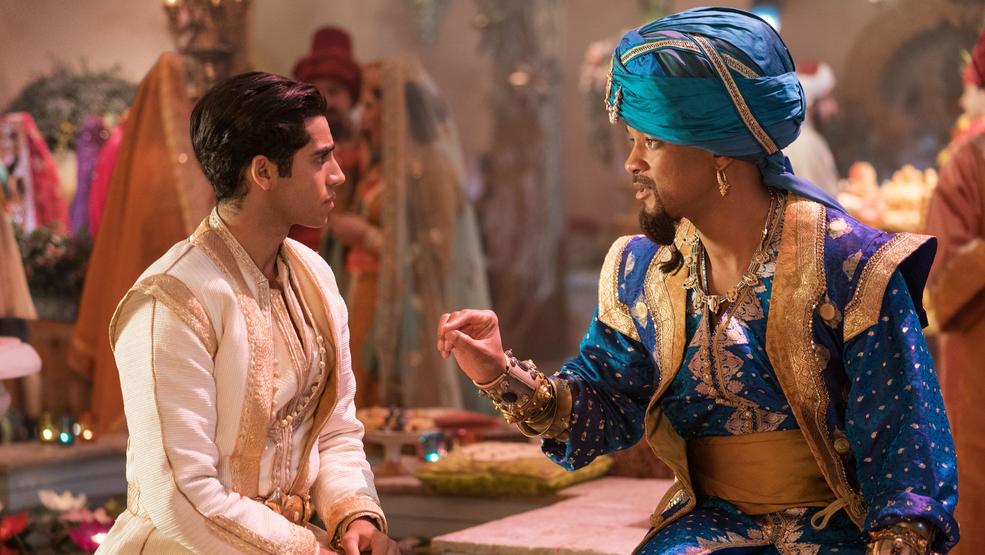 “Aladdin” was the highest grossing film of 1992, earning over $504 million in worldwide box office revenue. It was made in what is retrospectively deemed the Disney Renaissance, over a decade of animated films that were both commercial and critical successes and that have shaped the industry of animation as we know it. Winner of two Academy Awards and four Grammy Awards, “Aladdin” kept the ball of innovation rolling forward thanks, predominantly, to two words: Robin Williams.

Williams’ performance as Genie transcended any voice acting done up until that point and, for many people, since. Though he struck an unconventional deal with Disney to not have his name mentioned as a marketing tool to draw in audiences, once you saw the film, it was hard to forget who stole the show. This ushered in a new age of voice acting wherein the appeal of known stars lending their talents to animated films was a ticket to higher box office turnout.

As we look at the live action “Aladdin” remake out today, knowing some of its origin is pertinent for two reasons. Firstly, for anyone to take on the role of Genie would be like standing on a cliff, looking down into the ravine below, finding sharks nipping at the surface, sharks that breathe fire and spew hydrochloric acid, and jumping anyways.

And secondly, in spite of the film’s accolades and the general nostalgia Gen X-ers and Millenials have for the film, “Aladdin” from 1992 is archaic, to put it nicely. Its portrayal of women and Middle Eastern culture is insensitive, offensive and hardly representative of our values 27 years later.

So in respect to these two points, the newest live action adaptation of a Disney treasure actually manages to right the wrongs created by its source material and also to avoid any further controversy by acknowledging Robin Williams’ genius, filling his pointy shoes with another big name, and allowing this comedian to do what Williams would have wanted: have fun with role.

Aladdin (Mena Massoud) is a riff raff, street rat who sticky-fingers street carts for food and pickpockets valuable jewelry off unsuspecting passersby. The guards of Agrabah are always on his tail, and locals are wary of any product he may be scalping. When a pretty girl needs the assistance only a street urchin can provide, Aladdin leads her over and through buildings in a sequence that perfectly translates the vibe of the original.

Director Guy Ritchie excels in these extensive chase sequences, complete with very long, choreographed shots and slow motion effects, much like he did with “Sherlock Holmes”. The result is our emersion into this world, a warm embrace into a fully realized universe we knew only in its 2-dimensional form.

Princess Jasmine (Naomi Scott) is our strong-willed feminist heroine who hopes to change the patriarchal laws keeping her from becoming a Sultan. Foreign princes are courting her, and the fate of the country lies in her decision. All this, while her father’s top advisor, the menacing, staff-wielding Jafar (Marwan Kenzari), an evil sorcerer with his sights on the throne, is becoming a serious threat to Agrabah.

In order to go through with his nefarious plans, Jafar requires a magic gaslamp trapped in the elusive Cave of Wonders accessible only to “the diamond in the rough.” Aladdin is that untapped gemstone. He makes it into the cave filled with enough jewels and gold coins to make any pickpocket’s fingers sweat. He beelines for the lamp, but thanks to his monkey sidekick Abu, the wondrous grotto turns to rubble.

The lamp contains an all-powerful Genie (Will Smith), a smooth talking, pop culture savvy entity offering the rubber of the lamp three wishes. Aladdin, eager to be in consideration for Jasmine’s hand, naturally wishes to become a prince. Prince Ali is born, and the iconic song that comes along with the transformation scene is what makes this “Aladdin” so unique.

Smith, for all that previous talk about willingly dying by acid-breathing shark, takes the risk, and it pays off. His Genie is colorful, comedic, and suave. Dare we say, he even has a certain oomph, thanks mainly to the medium of the film, a mix of live action and CGI that wouldn't have been possible in 1992. The music of the original is given a hip-hop twang, which would feel forced in less talented hands, but it works here.

Our leads, Massoud and Scott, dance and sing and give the characters their all, which here is truly enough. Kenzari, despite his appearance and execution of the role, doesn’t imbue the same demonic dread that the original villain instilled in children around the world. He is convincing and dutiful to the character, and yet there is something missing.

The musical numbers, for all their grand showcases of dance and song and stampeding ostriches, can, at times, feel ridiculous. The new songs created for Jasmine to show her internal struggle against the inevitable shackles of marriage feel like they pander to the female audience. They say, “You wanted a real ‘independent’ princess? Here you go. She doesn’t want to marry a prince. What a rebel.” And perhaps for younger viewers, it is important she’s given a song of her own, finally.

When the sand settles, “Aladdin” is more fun than needs fixing. There is an over-abundance of kitsch, but it’s a kid’s movie after all. It will never be the original because mass memory obliteration and time travel haven’t been invented yet, so if you are going to see this remake and you’re set on hating it, you’ll probably hate it. Go in with an open mind and ready to be entertained and perhaps you’ll be pleasantly surprised.