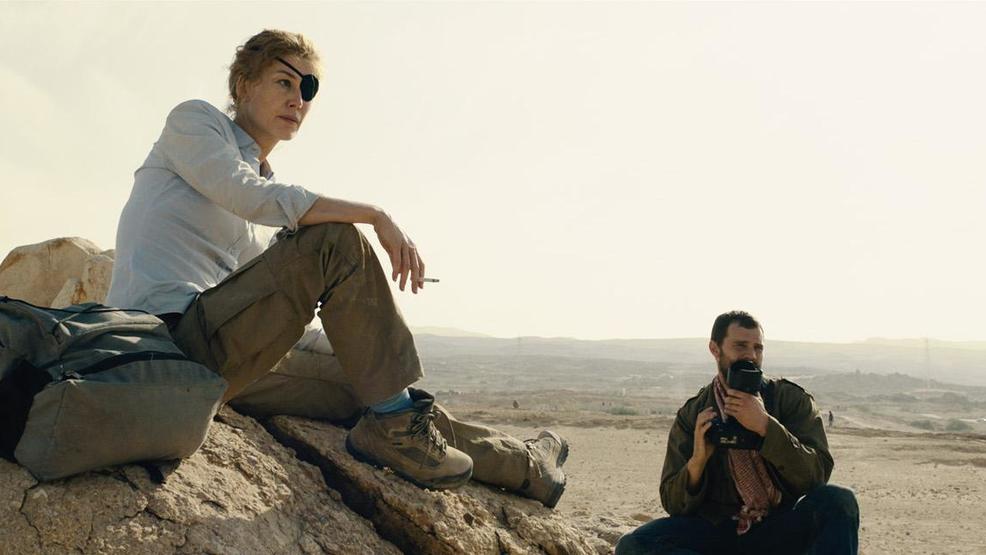 Leaving the theater last Thursday night, I felt slightly bad about what I do. In so many words, I see films and then write about them. The farthest I travel is downtown for screenings, an inconvenience about which I sometimes lament because of traffic, parking, crowds and other such modern luxuries I constantly take for granted. The safety and comfort of my job and of my life has never jabbed at me like a painful, unwanted Facebook Memory - until directly after seeing "A Private War", a biographical film about Marie Colvin, an American journalist and war correspondent for Britain’s The Sunday Times. Known for her brazen commentary from the frontlines of wherever there was conflict, Colvin was the poster child for daredevil reporting. She went where no one could - or should - oftentimes: Chechnya, Kosovo, Sierra Leone, East Timor and Sri Lanka, where a rocket-propelled grenade took her left eye.

Blindness and the resultant black eye patch she wore didn’t stop her from missing her deadline, and it didn’t keep her back from continuing her reporting wherever violence reined. Her final stop was Syria in 2012 where she encountered ruthless bombing and sniper attacks on civilian buildings and people. It was this last story and her eagerness to see it through that claimed her life.

Dodging more bullets than James Bond and Indiana Jones combined, Pike has the physicality required for such a role – even unashamedly stripping down to Colvin’s infamous La Perla bra – but the magnificence of her performance is that she emotes just as piercingly true in the stillness as she does in the action. We as the audience feel her pain and sense the suffocating air of danger as she trudges through desert valleys or fabricates a quick lie to pass through security checkpoints, narrowly evading the wrong end of a machete.

Even when she is home in London, Colvin can’t escape the faces of the dead she’s had to report, and this explains, perhaps, her personal life, which isn’t clean or pretty. She marries and divorces the same man twice. In between assignments, she dates a businessman played by Stanley Tucci who acts as a cardboard cutout of a love interest, filling in the role, but offering nothing to the story, more a product of the lacking character development in the script than any acting deficiency on his part. There is mention of wanting a baby, but her age and two prior miscarriages stand in her way.

But that isn’t what this film is about. We see glimpses of who she was outside of the job, but the job was her life and her legacy. It infiltrated her civilian life, formulating the PTSD for which she sought treatment.

Jamie Dornan, aka Mr. Grey from the Fifty Shades series, is her trusty sidekick and photographer, Paul Conroy. His anchoring presence onscreen is a delightful contrast to Pike’s loud, boisterous and unpredictable turn as Colvin. Dornan has a quiet, though substantial, market on the screen and our attention throughout.

Written by Arashe Amel and directed by Matthew Heineman, the film leads us ever closer to Colvin’s last report from Homs, Syria and her famous stint on Anderson Cooper’s show where she aired footage of a boy who had died at the hands of the Syrian government. By the time we reach the conclusion, we are well equipped to handle the reality of what Colvin saw firsthand, though it makes it no less heartbreaking.

In the years prior, we see the 600+ bodies she helped uncover from a mass grave in Iraq. Families mourn alongside the newly dug trenches, sweeping up dirt and throwing it over their heads in ritualistic waves. We see the humanitarian crisis in Sri Lanka where thousands were sick and starving. The filmmakers handle these subjects tastefully because it is the psychological toll it takes on Colvin that has us gripped to our seats.

Comparison is inevitable, and for many reasons, Colvin holds enviable real estate in the journalism hall of fame. But she’s more than her accolades and more than her death. If the film accomplishes anything, it reiterates her genius, her immense compassion and her rightful place as a legend.