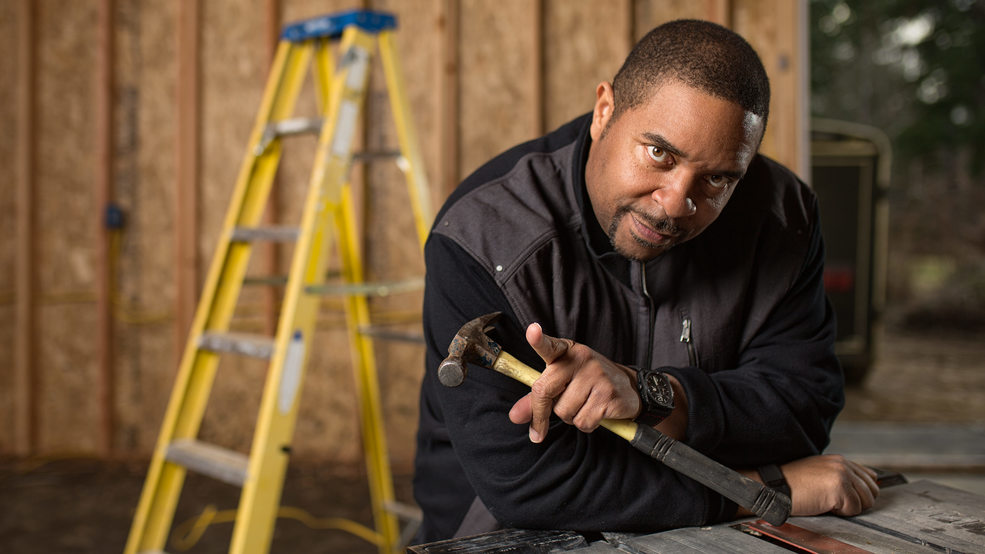 Rapping with the King of Old School: Seattle's own Sir Mix-A-Lot

"It's like the best thing in the world - I'm not kidding!," said his producer Tracy Sing. "To do to work everyday and to know what I get to work with the 'King of Old School.' It's like - c'mon! Sometimes I need to pinch myself."

The 'King of Old School' was born Anthony Ray, and he was raised right here in Seattle.

"Grew up at 19th and Yesler, baby," recalls Mix-A-Lot. "I came up during bussing, so even though I lived right by Garfield - I played basketball at Garfield every day - I was bussed to Roosevelt."

That experience had a major impact on his life.

"You know, it was funny," he said. "A lot of people hated bussing. It was inconvenient 'cause you're getting up at four o'clock in the morning, spend it at the bus stop at 6:45. But being exposed to other cultures and other ways of doing things was the best thing that could have happened to me, especially eventually becoming an artist."

Sir Mix-A-Lot's path to making music was a unique one.

"I stumbled into it to be honest with you," he admits. "Because I was I was a gadget freak."

He has a strong memory of his mother bringing him a set of walkie talkies when he was thirteen.

"One of them broke, [and I] couldn't figure out what was wrong," he said. "I opened it up, and saw this little thing that looked like a penny with a wire hanging out of it. I touched it, and it started working again and I was like 'Oh my God.'"

His interest was piqued, and he soon bought an amateur radio handbook and taught himself how to read schematics.

"I understood what a capacitor and what a resistor was, but I understood this ain't gonna pay me," said Mix-A-Lot. "So one day I'm watching MTV and a group called Kraftwerk comes on. They're not playing guitars and drums they're playing these weird things - hitting it with little sticks and buttons and I was like that's what I wanna do!"

Then he started writing!

He didn't think anyone would know it was him. But next thing he knows, he was being brought out to Miami to play it!

"I'm like 'How the hell did that just happen?'" he said. "So now I'm running around touring with that song and I'm like 'I can't keep doing this [that's the Smurf guy] so I took it serious."

That was that was just the beginning. It was around this time, in 1988, that he made his debut on KOMO TV's iconic show "Front Runners", hosted by Steve Pool.

"He [Steve Pool] gave me exposure early 'cause people out of town knew me, but people in Seattle didn't," said the rapper. "And you know, he had a show called 'Front Runners,' and I was on the show and people in town were like 'Wait a minute, that's the Square Dance Guy! And all of the sudden it started and I was no longer like Big Foot.'"

His following just grew as he continued creating chart-topping hits.

"I ended up doing a bunch of other songs, 'Posse on Broadway,'" he said. "And you know that was a platinum album! And then 'My Hooptie' and 'Beepers'. That's another platinum album."

Then in 1992 - his popularity exploded with the iconic hit "Baby Got Back."

"'Baby Got Back' started as a serious song," said Mix-a-Lot. "I was gonna do a slow, "Posse on Broadway"-esque 89 BPMs and it was gonna be dark. Really it was cause at the time, women of color in the 80s other than Claire Huxtable on 'The Cosby Show', were either prostitutes, the overweight maid that gave advice to the white children in the family...it was like I got sick of looking at that and it was almost like unless you assimilate as a woman of color then you're not counted as beautiful."

Then he got some advice. "Nobody's gonna want to hear it except people who agree. So what you gotta do is fool them into believing that it's fun," the rapper remembers. "And so I changed the song. I made it fast, I made it funny - tongue in cheek but the messages are still there and it worked."

At first listen, it's an ode to bodacious booties. But when you listen again, and look at the images - it's a celebration of women and all their curves.

And there's a message behind another famous line, "So Cosmo says you're fat? Well I ain't down with that. Gimme a sista I can't resist her."

"There was subtle little messages," he said. "And what happened is the message ended up broadening to all women."

"Baby Got Back" went double platinum and was a #1 hit. In 1993, Sir Mix-A-Lot won a Grammy Award for Best Rap Solo Performance for "Baby Got Back."

"That song has been a blessing and it's it's own brand," he said. Many other artists have sampled the famous song, including Nicki Minaj's song "Anaconda."

"It's funny because people are like 'Oh Nicki - she didn't talk about what you talked about,'" said Mix-A-Lot. "And it's like - she doesn't need to. It's proof that it worked. She doesn't have to mention her butt, she can have fun with the song - because now it's the norm."

Speaking of other artists, Sir Mix-A-Lot appeared on stage with Macklemore in 2011 at Seattle's Showbox Theater.

"That got me in trouble because I think people misunderstood what I was saying [to him]," explains the hip hop star. "Mac had told me there was some critics. Basically what I said on stage was 'Don't worry about it. Just take this microphone from me like a baton and run like the world's on fire!'

He was saying - launch your career.

"And it turned into 'He crowned Macklemore King of Seattle,'" he said. "No no - I don't have that kind of power!"

But the two artists do have a mutual respect for each other.

"And he's cool. That's one of the most modest guys I've ever met," he said. "Very modest, grounded, and he paid dues."

The value of hard work is something SirMix-A-Lot knows all about. For years he's been buying and selling Seattle real estate. Now he's combining his love of tech and passion for flipping homes on his new show "Sir Mix-A-Lot's House Remix."

"Me and Rob and Sly," he said. "Sly's like the sensible guy. He buys and sells himself so he's sensible - doesn't tight with the budget. Rob's more like me. Rob's like 'Nah nah you know we should do? Get a wrecking ball and knock this piece of crap down!' I always agree with him initially, then I realize I'm not the one who's gonna live here," he says grinning. "Sly's like the reasonable guy that kind of brings it down. And me. I get a little crazy with it. But I've had some homes myself and I've redone them. But I didn't think I was good at it. But people come in the house and they're like - 'Damn! Who thought of all this?' I guess I did."

"Gimme all kinds of double entendres and things moving around," he said grinning. "I love that kind of stuff and I love deep lyrics and you don't get that with pop music. It's all 'I love you and I'm so happy about it.' There is room for both - cause I do it."

You can catch 'Sir Mix-A-Lot's House Remix' on the DIY Network.