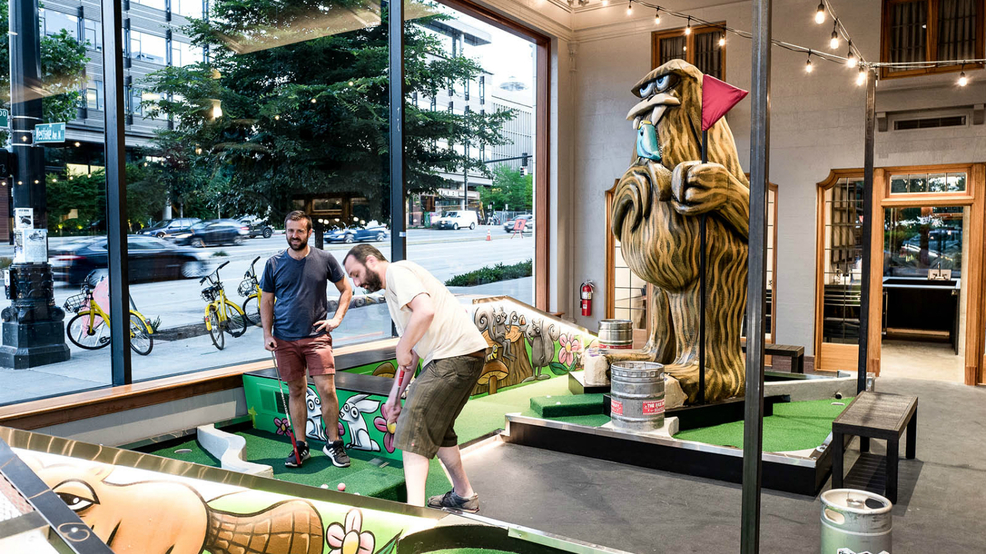 The Most Unique Putting Greens in the Seattle Area

One of the biggest hits of summer TV this year has been the miniature golf competition series Holey Moley on ABC.

Each week, contestants from all over the United States with varying degrees of skill, come together to compete for a chance of winning a cash prize, bragging rights and the coveted Holey Moley plaid jacket.

We were so inspired that we wanted to find the best local golf courses that offer similar experiences. While none feature anything close to Mount Holey Moley, some come pretty close. Sure, there are plenty of putting greens in the greater Seattle area, but we were looking for something a little extra special, and we think we found it with these eight courses.

You might call Rhein Haus the “little Germany district” in Tacoma. Opened in 2017, the pub features house-made sausages and pretzels to go along with their 24 European and Northwestern draft beers. With views of Wright Park, the views we were interested in were the 9-hole German-themed course.

“Probably the most unique is Hole #4, the Brat Windmill that spins while you play,” marketing director Erica Waliser tells us. “There is also a Hansel & Gretel house and Rumpelstiltskin castle that are pretty fun.”

Honestly though, every hole here is a winner in our opinion. The attention to detail is amazing. The Brat Windmill features four spinning sausages spiked on brat forks Ala windmill. Hole #5’s Hansel and Gretel challenges you to hit your ball toward the right side of the gingerbread house in order to escape the witch’s oven below and #6’s Rumpel-Putt-Skin is truly amazing as players are challenged to roll the ball up the ramp and into his castle. If you make it, the ball goes down another ramp down to the hole. If not, you’ll have to go the long way around.

Opened during the summer of 2017, King Mini Golf Park still looks brand-spanking new. Though fairly simple in concept design, the park is, dare we say, elegant (is that too lofty of a term for miniature golf?) with its beautiful blue water fountains, waterfall and river. Though it’s located next to a busy road, it’s quite peaceful here. The park also features some challenges we haven’t seen at other parks, especially Hole #3.

“Guests love this hole because it features a bridge to putt over, a river, and an unexpected outcome if you hit into the river!” says owner Dennis King, Jr. If you accidentally hit the ball into the drink, the “river” will actually carry the ball and deposit it back onto the green. If you see it in action, you’ll be tempted to hit it there and take the penalty.

You can stay late too. If it gets dark, they offer glow-in-the-dark balls. If you need a snack, walk on over to Skate Tiffany’s (also owned by the King family) which offers a menu of pizza, chicken wings, French fries and more. While you’re there, you might want to slide on some skates or play a couple of the arcade games. (Note: Skate Tiffany’s hours vary from the golf course.)

Those who frequent one of the Flatstick Pub locations know that there are only two rules to abide by: drink local and have fun. Originally, the idea when creating the first Flatstick Pub was to provide a place that offered local beer and a challenging mini golf course. And they did that and then some. Today, there are three pubs, each similar but uniquely different as well.

All three courses feature a variety of challenges and hazards to overcome with many of them involving beer kegs. For instance, at the Kirkland location, one of the most difficult holes to overcome is one where you have to hit your ball through a small hole inside a beer keg. If you miss it, chances are you’ll get still in the gutter on the side. It looks simple enough, but they tell us, it is one of the most difficult holes. At the South Lake Union location, there is a hole where you need to hit the ball up a hill where it rolls down a different hill with pegs and depending on which ones the ball hits, it could land in a variety of different locations.

Flatstick also created its own golf-inspired game - Duffleboard™, which is sure to catch on. This is a tabletop game that is a cross between shuffleboard and mini golf and features a variety of holes to try out depending on which location you visit. (There are 10 holes in Pioneer Square but only one in Kirkland.)

The problem with so many modern miniature golf courses is their lack of uniqueness and challenges. Many feature cute castles and the like, but are reduced to decorative items on the side instead of obstacles to overcome. Not so at Mike ‘N’ Terry’s Outdoor Fun Park. According the BBB, the place has been in operation since 1996 but has a real nostalgic quality to it. The holes featured here did not come from a kit of any sort. Every hole was homemade and though there is a little wear and tear here and there, this park is well worth the trip.

There are two courses to conquer here — one a little easier than the other. When discussing with the staff on which holes were the most challenging they each had different opinions. Terry, the matriarch of the park, tends to think that the old-fashioned windmill was the most difficult while there were discussions about one hole that features a few giant ladybugs and one large hill, another that requires you to hit the ball between two turtles before entering a cave and another that features a giant dragon guarding a hold. He’s friendlier than he looks.

In addition to the mini golf, this place is also home to a batting cages, a go-cart runway and a paintball play area.

By far the most popular course we found on our one-day journey were the two found at Family Fun Center in Tukwila. While neither of them looked terribly difficult, the place really earned points for atmosphere, cleanliness and a beautiful garden setting.

There are two courses to choose from here: Memory Lane and Arctic Adventure. Memory Lane features mini golf obstacles from former golf courses from all over the U.S. that date from the 1940s to the 1990s. Those of a certain age will remember some of these including a little red school house, the Eiffel Tower and a pixie house. The only negative here is that most are put on display on the side rather than to be experienced as they were meant to be used. Arctic Adventure is themed around the Pacific Northwest except for that giant rooster. We’re not sure what he’s doing there.

Up North in Edmonds, you’ll find a pirate-themed golf course that is set partially indoors and partially outdoors. While this course is a little worn and not up to the standards of the Tukwila location, it’s still fun to play and easy enough for even the youngest kids to master.

Both Fun Centers also feature many other attractions and activities like bumper boats, go-carts, laser tag, arcades and more.