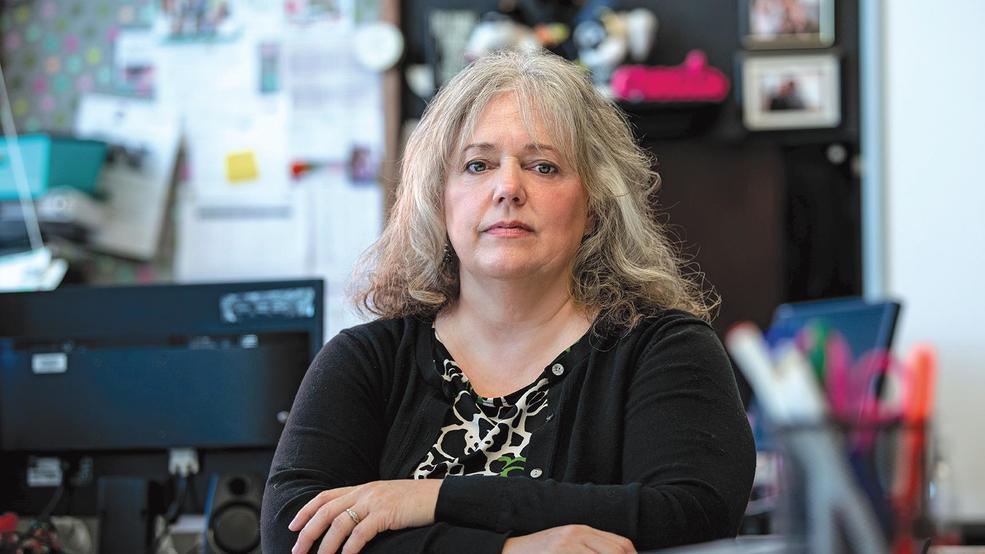 January 7th, 2019 — Shelton, WA. Carri Fennel poses in her classroom at the CHOICE school in Shelton, WA, where she teaches. Fennel is probably the last person you’d expect to have a felony conviction on her record.The Shelton woman is one of the most caring and compassionate teachers at Shelton’s CHOICE High School, an alternative education program, and her family is admired throughout the community. Yet all it took was one mistake on her drive to work in September 2009 to wreck the lives of two families after she struck a pedestrian while texting and driving.Photograph by Stuart Isett. ©2019 Stuart Isett. All rights reserved.
SEE MORE

Put down your phone; lives depend on it

Carri Fennel is probably the last person you'd expect to have a felony conviction on her record. The Shelton woman is one of the most caring and compassionate teachers at Shelton's CHOICE High School, an alternative education program, and her family is admired throughout the community. Yet all it took was one mistake on her drive to work in September 2009 to wreck the lives of two families—her own and that of the pedestrian she nearly killed as a result of texting and driving.

Fennel does not feel sorry for herself, and she does not expect others to do so. Nearly a decade after she made the poor decision to reply to a text while driving, Fennel spoke with AAA Washington's Journey magazine about the magnitude of destruction that can result from just one brief moment of distraction behind the wheel.

"You just never, in your wildest dreams, think you'd ever harm a person," Fennel says. "You're not being aware. You're not paying attention, and you just change the lives of not just one person, but it's a ripple effect that's just astronomical."

In the decade following Fennel's collision, the way we interact with our cell phones has changed dramatically. Smart phones allow us to text, use email, take photos, go online and even occasionally, talk on them. As the number of functions on our phones increased, so did the number of distracted driving deaths and serious injuries. Distraction now plays a role in 30 percent of Washington's traffic fatalities, killing, on average, 150 or more drivers each year.

In an effort to reverse those numbers, Washington enacted a much tougher distracted driving law in July 2017. It bans drivers from any handheld use of a cell phone or other electronic device, even when sitting in slow-moving traffic or stopped at a traffic sign/signal.

On the one-year anniversary of that driving under the influence of electronics or E-DUI law, AAA conducted new research to learn what Washington drivers were doing behind the wheel.

A study of more than 1100 drivers revealed that while 98 percent believe that texting and driving can cause a collision, only 31 percent said they never use a cell phone illegally while driving. And two-thirds of those surveyed said they multi-task well while driving.

Fennel begs to differ. A few months after her crash, the Shelton woman pleaded guilty to vehicular assault, and received a sentence including fines, community service and probation. In an effort to prevent this from happening to anyone else, Fennel shares her story and the story of her victim at school assemblies in the Shelton area. She has a strong message for all motorists.

"So this one thing that you think is so important, that you have to deal with in your car, is just nothing compared to the damage you can cause."

AAA's campaign "Don't drive intoxicated. Don't drive intexticated." makes the case that whether you choose to drink and drive or text and drive, the consequences are the same – death or serious injury.

We're asking you to Take the Pledge prevent intexticated driving. Instead of signing your name to the pledge card, write the name(s) of someone for whom you're taking the pledge. It's a promise to protect them by driving distraction-free. Next, take a selfie holding your pledge card and post it to social media using the hashtag #DontDriveIntexticated. You can pick up a pledge card at any AAA store location or download it at AAA.com/distracteddriving. Also there, is a list of ways you can prevent intexticated driving every day and a link to the complete Carri Fennel story as published in the March/April edition of Journey.