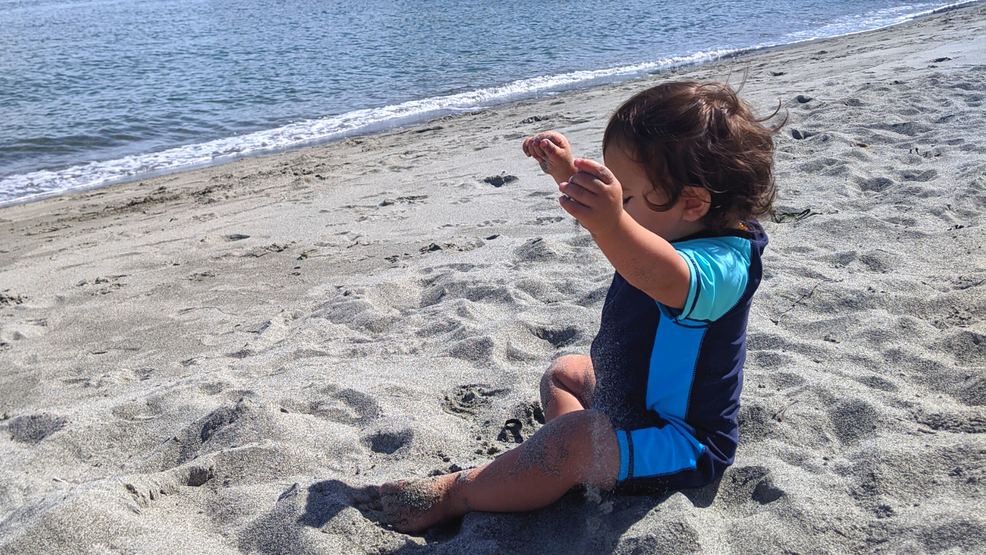 My husband stands at the motel room door, holding a backpack and his car keys. “Are you sure you’re going to be okay?” He asks for the seventeenth time. It’s the first time he and I have been separated since our thirteen-month old was born. In fact, COVID has meant that we’re the opposite of separated - stuck together, piled on top of each other, always a shout away.

I wave to him casually from the motel bed. “We’re fine! Don’t worry about us.” Inside, I’m terrified for reasons I can’t explain. I feel like I’m thirteen again, being left at summer camp. But this time I’m the mom. I’m supposed to be in charge.

He gives us both one last worried look and then shuts the door. Inside the motel room, my son and I stare at each other. He is chewing on the side of a TV remote. It’s only 1 p.m. Now what?

I planned this beach trip because I thought it would be fun. My husband and I would drive up to the Washington coast for a night and then he would head back home Sunday evening and I would stay two more days with our son. A solo vacation with a baby.
I also planned this vacation because I couldn’t bear to face another Monday with an empty email inbox, my work load another casualty of COVID.
I also planned this vacation because we were supposed to be on our once-in-a-decade Europe trip that we’d been saving for for years, but like so many families, had to cancel.

In fact, all the family plans we’d made this year had been cancelled. Not just vacations, but little moments: blueberry picking, BBQs with his cousins, watching his dad play flag football. All of his firsts: his first birthday party and his first playdate and his first swim lesson. Instead, our new life consisted of three places: the bedroom, the living room and the park. We rotated through them, over and over and over, throughout each day.

In my head, our two-day vacation would be full of early morning lattes at an outdoor cafe looking over the ocean, long walks on the beach, hiking through the forest, takeout clam chowder on the pier. I just wanted him to have something different. A memory of him playing on the beach. An adventure I could tell him about when he was older. Or maybe I wanted that for me.

But now here we were, in a dim budget motel room on the Washington coastline, by ourselves. It was too late for lunch and too early for wine, so I decided we’d go check out the beach.

“Beachtime!” I sang out, trying to get some excitement going. He had moved on from the remote to the roll of toilet paper in the bathroom which he had unspooled entirely and was now ripping each ply into tiny little toilet paper snowflakes.

On the drive to the beach, I rolled down the windows. Looked out over miles of ocean. Sang along to Raffi, "Did you ever see a whale with a polkadot tail? Down by the bay!" My son watched me in the mirror, delighted. I remembered being a little kid on beach trips like this, and now here I was: the mom.

It wasn’t until we got to the beach that I realized I had to pee. The public restrooms had a big CLOSED sign. Right, COVID. Then my son started crying. It occurred to me that the overpriced organic pouch I had planned to bring along was still sitting in the motel mini-fridge. And now I really really had to pee. Then I saw the giant sign, Parking Pass Only. That's when I remembered that I hadn't left the house much in 2020. I forgot about parking passes. I forgot about packing lunch. I forgot that cash only was a thing. Or that all public restrooms seem to be closed due to COVID. In our tiny world of nursery, living room and neighborhood park, I am never far from home. Never have to worry about forgetting our lunch. Or needing to pee.

I pulled my son out of his carseat and started pawing through the car, looking for an old rice cracker or forgotten banana that I could feed him. What kind of mom forgets their kid’s lunch at home? And what was I gonna eat for lunch?

Something fluttered near my face. A bee. Circling us. Intent on landing on my son’s bright yellow swim shirt. My son cried harder. I tried to swat the bee away but it only became more determined. “It’s okay,” I told him. “Mom’s got you.” But really, the bee had us. I tried to insert myself between it and my son’s little yellow arm but it just flew over my head and landed on him again.

I took off running, holding my son out in front of me. I will just pay the parking ticket! Who needs a stroller?! Maybe somebody at the beach would throw us an old slice of bread meant for the seagulls. The bee kept bumping into my ear, hot on our trail. My son was now simultaneously laughing and wailing. A couple in an RV stared out their window as I ran past. I would not call my husband. I would not call anyone. I do not need an adult. I am the adult. I am the adult.

But after a few minutes, I realized that this plan wouldn’t work. Not only was my son too heavy to run with, but I was about to pee my pants and I had forgotten his sunhat back in the car. Maybe we wouldn’t go to the beach! Maybe we’d just go watch TV in the motel room.

This was something else I missed out on because of COVID. Crying at the zoo, and hungry at the swimming pool. A blowout diaper at the blueberry patch. Bee stings at the beach. Forgotten sunblock and pacifiers and a cell phone charger. Always down to the last diaper.

On the drive home, a few blocks away from the beach, I saw a sign for burgers. I pulled into the cafe parking lot. Maybe it wasn’t meant to be a beach day, it was meant to be a burger day! I stuffed my sniffling red-faced child into his stroller and got all the way to the cafe window when I realized I forgot my mask in the car. Alrightly, we’ll just head back and grab it! My son stared up at me, so disappointed.

A woman behind seven layers of plexiglass sold me a burger with fries and pointed me towards the restroom. She shook her head when I asked if I could use my credit card to buy a parking pass from her, or even to get $10 in cash.

Then she peered out at me, sweaty and biting my lip, trying to hold it together, and my son, trying to fight his way out of the stroller. “You know, this parking lot is for my customers and you’re now my customer, so how about you just stay as long as you want?” she said. Then she pointed across the street to a sand dune. “There’s a nice beach right over that dune.”

We sat on our picnic blanket and split a burger and french fries (I dipped mine in ketchup, he dipped his in sand). I found a sunscreen tube in the bottom of the stroller. We splashed in the waves. We waved to sailboats. I took too many pictures and then my phone died. My son discovered that when you throw water up in the air, it rains down on you in a marvelous way, and we did that over and over. “Look at us,” I told him as the sun started to lower over the water, “we’re on vacation.” We didn’t even mind when the bee found us and we had to take off running down the beach.