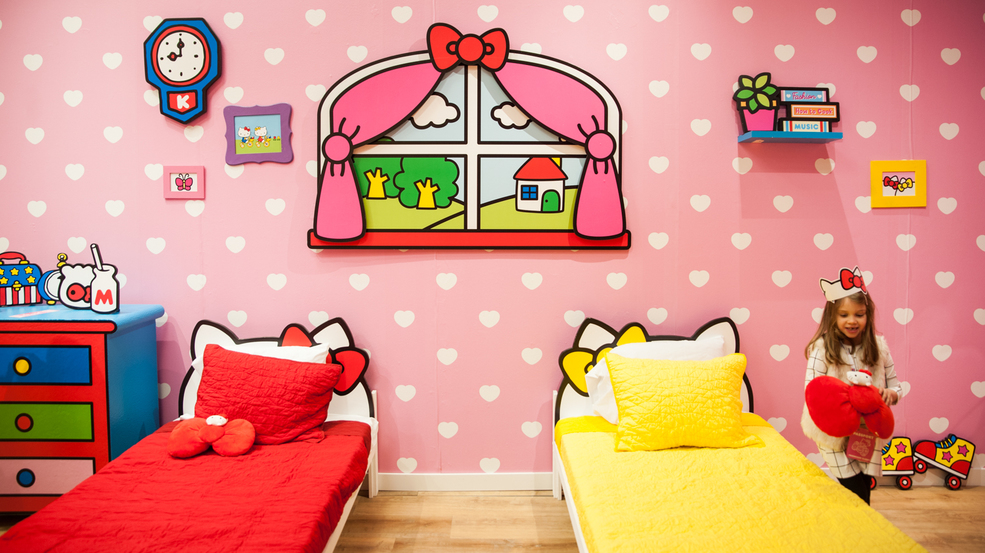 The Hello Kitty Friends Around the World Tour has officially arrived in the Pacific Northwest for it's second time! Setting up shop in Bellevue until December 29, the immersive, sensory experience lets you walk through the world of Hello Kitty and her friends. 10,000 supercute square feet, the pop up has five rooms: London (Hello Kitty's house), Paris (Hello Kitty Cafe), New York, Honolulu, Tokyo and Baggage Claim (gift shop). While the pop up is open through 12/29, different days have different hours, so <a href="https://www.showclix.com/event/hello-kitty-seattle" target="_blank">make sure you check those out before you go. Tickets start at $22.</a> (Image: Elizabeth Crook / Seattle Refined)
SEE MORE

A 10,000 square foot Hello Kitty pop-up has landed in Bellevue

This pop-up may be in downtown Bellevue, but pack your bags and grab a passport - and you're headed on an adventure around the globe. It's the purrfect way to celebrate an icon, called Hello Kitty.

Originally created in Japan, the character starting sharing her message of friendship in 1974. Since then, her popularity has exploded. Her official ambassador Ivan Garcia shared some of the meowvelous highlights in this interactive world, spanning 10,000 square feet.

"We bring people in through five stages," he said. London, Paris, New York City, Honolulu and then Tokyo.

We started by kickin' it in Hello Kitty's home base: her bedroom in London. It was a great way to get a sense of what it feels like to start the day - Kitty style. From grooming, to choosing an outfit.

All that jet lag can make a cat tired, so we stopped at a cafe in Paris for some espresso.

Next up, we touched down in New York and took a taxi cab ride to the Big Apple, where we found some fans having fun.

"No matter what age you are, you just have fun with her," said one. "And you just feel like you are a little kid in her own world."

"Oh it’s been amazing," another fan agreed. "The setup is really great! I think they worked really hard to set everything up. She’s already tuckered out from running around and taking pictures everywhere so we’ve loved it so far."

Then it was time to travel to a tropical paradise. Grab some poke and hit the waves...

In Tokyo - we hopped a train to meet up with Hello Kitty herself.

"You can’t come in here with a bad attitude," said Garcia. "People are amazed by all the photo opportunities we have. Obviously meeting Hello Kitty in the flesh - so people’s energy just makes it a fun super cute time."

Hello Kitty is the cat's meow, but want to know a super cute fun fact? According to parent company Sanrio, she's actually a little girl!

And...ever wonder how she talks?

"A lot people don’t know that Hello Kitty doesn’t have a mouth," said Garcia. "Because she speaks from her heart, which gets me all the time."

Once the tour is over, you end up in baggage claim - AKA the gift shop. Duffle bags, Funko figures, bracelets, jackets - you name it.

"Everything Hello Kitty has to be super cute. That’s the way we do it around here," he said.

After all that celebrating, it was time to relax with a snack in the Hello Kitty Lodge.

"We’ve got a lot of adults – super fans – ya know, back [for her 45th anniversary]," said Garcia. "And now kids that are just being introduced to her - it’s been a great time.

One thing is for sure: after 45 years Hello Kitty's popularity is just as furocious as ever!