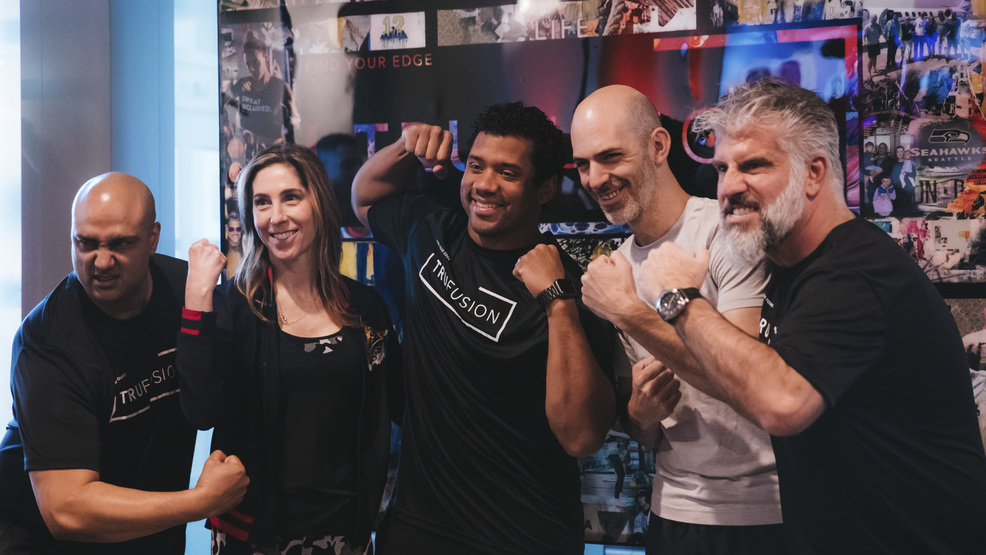 Four studios, 200+ classes a week, 65 class styles, one location. Too good to be true? That's what Russell Wilson thought as well when he signed onboard as lead investor with TruFusion, now open in Bellevue. The Seahawk quarterback joined local owners/entrepreneurs Taryn Naidu, Scott Swerland and a handful of lucky (and sweaty!) press for the first ever class at the new location. Monthly memberships are $120 for the first 1,200 to join! More info at www.trufusion.com. (Image: Sunita Martini / Seattle Refined)
SEE MORE

Russell Wilson is getting into the workout game. The Seahawks quarterback partnered with Alex Rodriguez and local entrepreneurs to bring Washington's first TruFusion studio to Bellevue's Lincoln Square South.

"I don't like being one of those people who does something that everybody else is doing," said Wilson. "I want to be the first. I want to be the one and only. And so I think that's what TruFusion is doing."

TruFusion Bellevue is outfitted with two fitness studios and two yoga studios. What makes it unique? They offer a ton of different group fitness classes under one roof.

"A lot of people who are working out at different places are doing the same workout and they get bored of it after three months, so they change gyms," said Taryn Naidu, President of TruFusion Washington. "What we bring is 65 different styles of workouts. Anything from bootcamps, barre, Pilates, all types of yoga, TRX, anything that you would like, we offer."

"It's a lot of fun too. The culture in there. You're listening to music. You're jamming out. You're enjoying it. You're high-fiving everybody. It's a really cool experience. So that's what I love about it. It feels like a team sport when you go into the room," explained Wilson.

TruFusion may be Russell-approved, but we wondered if it could really live up to the hype. So I decided to grab Refined's Workout Warrior Gena Wynkoop, and find out.

We hit the mat for TruFusion Tru Hot Pilates with Studio Director Stephanie Larson. TruFusion offers plenty of unheated classes, but with hot Pilates the keyword is hot, as in 95 degrees and 45 percent humidity.

"When you walk into that room - it's not warm, it's hot, which is a good thing," said Wilson. "You get to sweat it out."

Think of the class we took as traditional mat pilates, turned on its head.

"You'll see mat Pilates exercises. We add in some strength, some yoga and some HIIT training," said Larson. "We'll get some burpees in because those are my favorite. And all of that is done in our heated studio, our Sweat Studio,."

How did Gena and I fare? Check out the video above to see more.