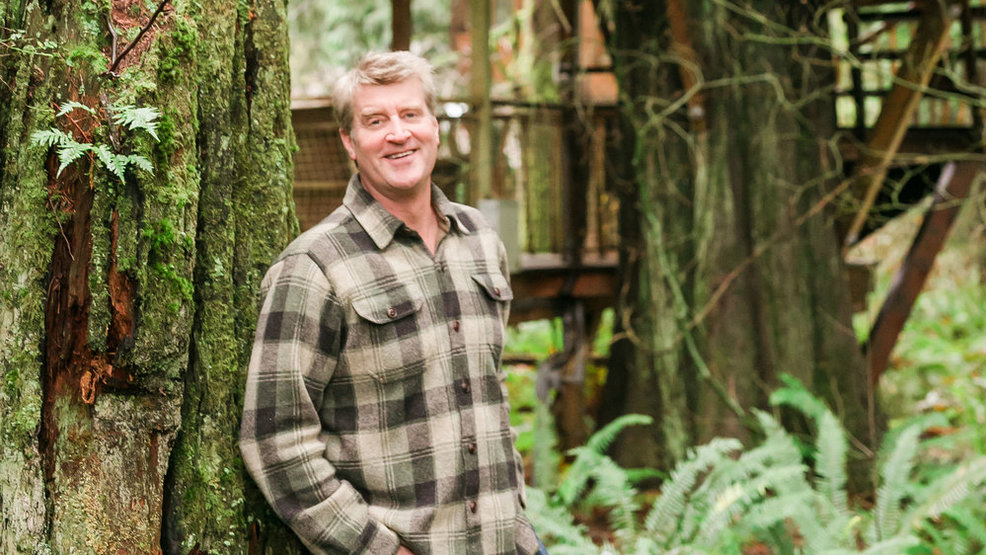 "This is one of those places where you realize the Pacific Northwest is heaven," said Nelson.

He's has been interested in treehouses for as long as he can remember.

"We called them tree forts when I was growing up," he smiles. "So I was a builder from day one. I wanted to build a little place that would be up in the trees. My brain was working on the level of what I needed to make my little fort work. What I didn't get was that what I was attracted to was the trees themselves."

So for this Master Treehouse Builder, it's actually more about the trees than the houses.

"I think that's true for everyone when you think about it," said Nelson. Where some people see trees, he sees friends.

"OK - so I personify trees. Which is kind of a weird thing, but they call me the Tree Whisperer cause I talk to them and scratch them," Nelson says with a twinkle in his eye.

He's been thinking about trees since he was just a little kid himself.

"We had read an abridged version of 'Swiss Family Robinson' with a lot of pictures in it," said Nelson. "It's a really cool book - I'll never forget it. I can't remember if I was 5 or 6, but it was right in that time frame when my dad was like 'Let's go build a treehouse!'"

This is where Nelson's idea started, and when he was 25-years-old he built his first ever adult-version of a treehouse.

"When you're a kid and you're like, 'I'm gonna build a treehouse!' And it's the worst treehouse in the history of mankind, but you know you were done in a weekend," he smiles. "But this one that I had imagined as a 25-year-old was a little bit more. It was still small, but it had a brick fireplace for instance."

Nelson's treehouse idea expanded when he came upon a property just outside of Preston.

He discovered it by accident.

"Almost 12 years ago to the day I came upon some bushes," Nelson recalls. What he saw was a potential place to build treehouses that people could stay in.

Now, Treehouse Point has grown to include six treehouses that you can rent out, B&B-style. Each has it's own name and personality.

Temple of the Blue Moon was the first treehouse Nelson created here.

"I came down here, and it was night, and I was down by the river looking around," he said. "Then I saw this beautiful tree when the moon came over the ridge there that happens to be the blue moon that lit up the Sitka spruce like a lightsaber. Then, I was just like 'AHHHH Ok right there, there's where we're building a treehouse."

Treehouse Point is just part of the business that Nelson and his family have built. Besides the B&B, there are books, treehouse plans and supplies you can buy as well.

Nelson and his treehouses are followed on multiple media platforms and television programs all over the world.

Over the years, Nelson has continued to branch out - including filming his long running TV show - Treehouse Masters.

"We are are actually filming Season 11 of Treehouse Masters right now, which blows me away! We are going strong and we love it," Nelson said.

One of the most recent treehouses Nelson made was for a larger-than-life celebrity!

"Just lately we did a treehouse for Shaquille O'Neil," Nelson said. "He's a big guy but he is so lovely and fun. I mean that guy, he is a jokester but he's warm and he's present."

Above all, among the trees is Nelson's favorite place to be.

There's something magical about a treehouse - as opposed to a regular home.

"Yes, there's no doubt when you elevate your yourself a little bit, that changes the perspective on everything," Nelson said, grinning.