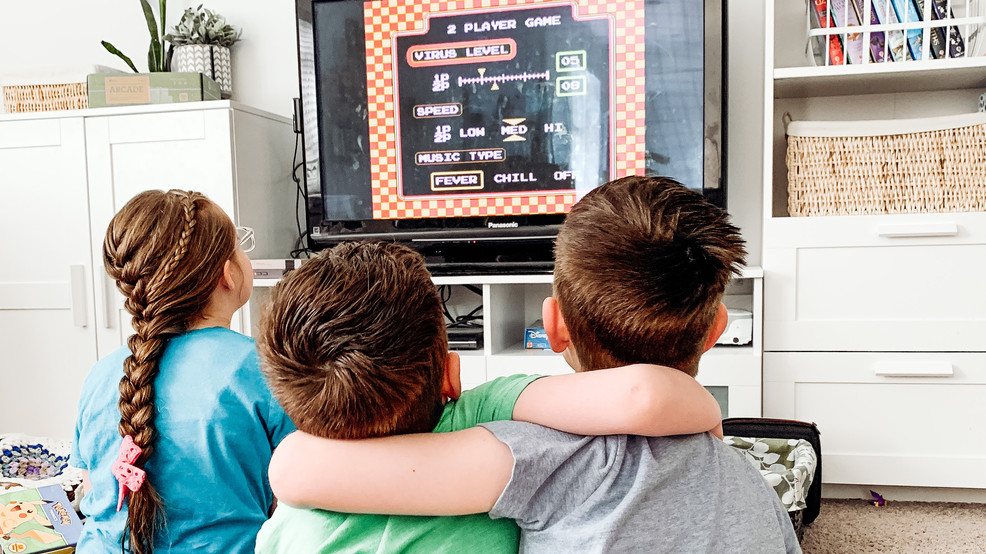 There's about a month of school left in this very different — often difficult — school year.

While some teachers have hit their stride in digital, long-distance learning, that isn't the case on the home front for some parents. The consensus is (at least amongst my friends, family and what I'm seeing on social media) is that many parents are reaching burnout thanks to the schooling schedule during this crisis. No doubt, the remaining six weeks of the school year feel daunting.

In this season of juggling new things while trying our best — true of both parents and kids — it’s easy to implore movies, television shows and games as default entertainment and stress relief.

I know, because I’m doing it. Every. Single. Day.

Word on the street is that screens are toxic to kids. And, of course, they can be when void of boundaries. But as a seasoned homeschool parent, I’m confident that it’s totally OK to allow screen time. And, in the current climate of working from home paired with no extracurricular activities, more screen time than usual is definitely warranted.

Here is my logic: right now things are not normal. In fact, right now is a time for surviving, not thriving. Would my kids learn better and retain more from hands-on science activities? Yes, they would. Do I have time to facilitate that currently? That’s a hard no. So, I’m not going to feel guilty when I ask National Geographic to take the reins on science every now and again. Will my kids pick up some great vocabulary and increase their reading comprehension skills if you read aloud a classic chapter book? 100%! Will the movie adaptation ruin their chance at college, though? Certainly not.

See? TV isn’t the enemy! It is just fine to embrace screen time for its benefits!

Now, even though I’ve loosened up on our TV time throughout the day, it isn’t a free-for-all. We have a general rhythm to when we watch/play, and the biggest rule is that my kids always have to ask me. Not to sound like a control freak, but the remote is mine, and I dole it out and fully manage the privilege of screens. It’s the first thing that is taken away for poor attitudes and unkind behavior — quarantine or not.

Generally, I let my kids start the day with a show or two of their choice. My oldest son serves up “first breakfast” to his hungry brothers (usually granola bars or their favorite, dry cinnamon raisin bread) while they watch something on Disney+. I’m not a morning person, so this screen time is more about my survival than their TV enjoyment. Once I’m rollin’ for the day, the television (and all screens not being used for specific school assignments) is off for a handful of hours. After lunch and before nap time, I usually try to fit in some work, so I’ll choose an educational show for the kids to watch and gift myself an hour of peace and quiet. Their current favorites are:

Television is, no doubt, a valuable learning tool. The issue is that it can’t be the only one. Use it with discretion and teach your kids to do the same. Practice balance and help guide your kids toward age-appropriate documentaries and learning shows. Then, release the worry of too much screen time. Consider a well-chosen episode a teacher of sorts. It’s A-OK to delegate your teaching responsibilities or supplement a topic you’re covering with some on-screen viewing.

We fit in some non-educational screen time too. After naps, while I prepare dinner, I almost always shuffle my kids outside to play, but once we’ve eaten and cleaned up, we snuggle up for a just-for-fun option. Sometimes they divide up and play a favorite game; other times, they request a favorite cartoon or an episode of "LEGO Masters". Most recently, we enjoyed comparing the 1977 "Pete’s Dragon" with the 2016 live-action "Pete’s Dragon" with back-to-back movie nights.

Should my kids be watching television morning, noon and night? Maybe not. But seeing that we’ve been home nonstop since early March and have a ways to go with both school and some level of a stay-at-home order, I’m letting them enjoy a little more freedom in the screen department.

Parents, take it from me, it’s OK to allow more screen time right now. De-prioritize “the perfect school day” (that’s just asking for trouble) and just say yes. Right now, we’re all just doing the best we can, and if your kids need to veg with a show or you need a babysitter for a phone call, welcome that we’re living in the age of technology during this pandemic.