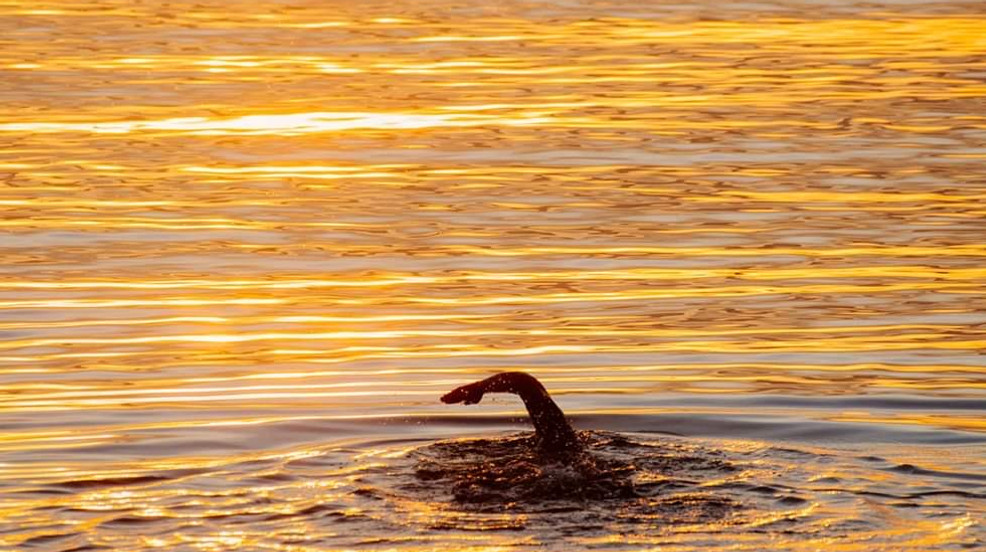 Splish Splash: Open water swimming is on the rise amid COVID-19

As COVID-19 wreaked havoc on schools last spring, educator Kelly Danielson found relief from stress and uncertainty by plunging into the sea that surrounds her home on Bainbridge Island. The school-based occupational therapist undertook an epic challenge — a 45-mile swim around Bainbridge, including all its harbors and shoreline crevices.

"It kind of got me through all this with the coronavirus," said Danielson, who completed her "skin swim" (sans wetsuit) in one- to three-mile daily increments over 28 days in June and early July.

Puget Sound water temperatures typically hover around 50-some degrees, so the thought alone may give most people chills. Yet Danielson is hardly alone in seeking respite from the pandemic blues in our region's stunning bays, lakes and channels. Open water swimming is having a moment of sorts, say enthusiasts. With pools and gyms operating at limited capacity and parks and trails often overcrowded, it's a sport uniquely suited to the coronavirus era.

"It's the perfect way to social distance," said marathon swimmer Melissa Kegler in Redmond. "No one is around you in the water."

Interest in open water swimming is "absolutely" on the rise, echoed Sam Day, a founding member of the open water swim group, The Notorious Alki Swimmers. The group meets year-round on Saturday and Sunday mornings at the Alki Beach Bathhouse and numbers about 50 regular swimmers, including Danielson and Kegler. They welcome swimmers of all levels — from beginners to triple crown swimmers like Kegler (the triple crown of open water swimming is the English Channel, the Catalina Channel off the California coast and circumnavigation of Manhattan Island).

As a result of the pandemic and the closure of the West Seattle bridge, the community has grown and spread to other areas. A Facebook page they connect on has added hundreds of new members over the summer and now tops 2,800 - an increasingly active hub of tips, stories and encouragement among swimmers from Bellingham to Tacoma. Some — many of them women — are tackling challenging local swims to boost their motivation.

Take Danielson's big swim. Stuck on Bainbridge Island and missing her Alki friends, the mother of two decided to explore her home waters. She announced her plan on social media with hopes of getting some Alki buddies to join her. They did not disappoint, joining her in the water to brave such hazards as poor weather, jellyfish, and shifting currents. They were there for the joyous moments as well, including her final mile into Blakely Harbor, where she completed the loop amid cheering and honking from a boat parade of friends and family.

"The people who came out there and made it possible with me, that was the coolest thing," Danielson said.

That level of camaraderie stems in part from the sport's inherent danger and trust among open water swimmers to look out for each other and provide moral support. Open water swimming can be as much a mental challenge as it is a physical one. Wildlife - from the aforementioned jellyfish to sea lions — is a common source of trepidation (as well as wonder). Boats, jet skis and currents are others. One of the hairiest moments of Danielson's stage swim was in Rich Passage, where a swirling back eddy stopped her progress until the current shifted, picking her up and shuttling her around the point. On another leg of the swim, a friend on a paddleboard scooped up jellyfish that were in her path.

Guila Muir, who leads guided, open water swimming adventures around the Puget Sound, stresses the importance of safety measures. At the very least, swimmers should wear bright caps and swim buoys to increase their visibility, she advises. It's also a good idea to stay close to shore, swim with a buddy, and be familiar with the area and its conditions.

Demand has spiked this year for Muir's swim lessons in Lake Washington, which she recently extended through October. She's not surprised more people are discovering the sport in these anxious times, citing research into cold water swimming as a treatment for depression, anxiety and other ailments.

Local waters can dip to a spine-tingling 45 degrees by February. That's when wetsuits, booties and gloves become indispensable for many.

"When you get to those days, you're like, 'Oh god, why do I do this?'" said Danielson, who skin-swims year-round. "That's when you need your friends."

Yet there is magic to be found in such conditions. It's why many get hooked on the sport, and many cultures around the world swear by cold water plunges, according to Emily White of West Seattle.

"There's a reason for that," said White, who swam around Mercer Island with three friends in July and is a regular at Alki Beach. "There's something about the cold saltwater that does miracles for your soul."