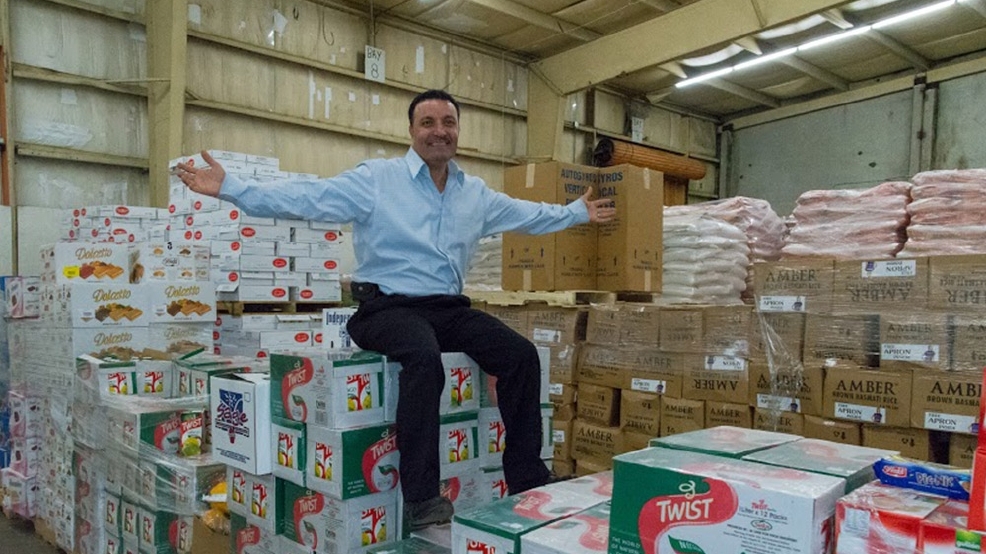 Moussa Elmoussa, owner of Gyros House in Renton's The Landing, made one phone call to his suppliers about donating to the Salvation Army. In one day he raise $20k in food donations. (Image: Tony Leonhardt)
SEE MORE

One man, one phone call inspired $20k in donations to the Salvation Army

One man makes one phone call, and an hour later thousands of lives in the Seattle community are changed. That man is Moussa Elmoussa, a business owner at The Landing in Renton which hosts an annual Food Drive for The Salvation Army.
Over the years, Elmoussa had come to realize that the barrels outside usually ended up collecting more trash than food. So this season he requested a box to place inside his Gyros House Mediterranean Grill restaurant instead.
But when he looked at the box after a couple days, it was filled mostly by his own personal donations.
"I thought, 'Wow, I bet I can get more food,'" said Elmoussa. "I am going to contact my suppliers. I buy food, and we're talking big money, from them. Perhaps they would like to donate."
The first supplier he called was West Coast Pita. Elmoussa spoke to his friend and owner of the company Ali Shibane, and requested either food close to expiration or any other sort of contribution. Shibane said he'd look around the warehouse and see what he had.
One hour later, Shibane called back to say the company would donate 10 pallets (almost $20,000 in food) to the Salvation Army.
Thankful for the generous donation, Elmoussa drove to the warehouse half anticipating the pallets to be damaged or broken food product - but everything was brand new, and in perfect condition.
Overwhelmed, it inspired Elmoussa to call others, including family-owned Evergreen International Inc., who immediately gave five cases each of their vegetables (including cucumber, lettuce and tomatoes).
"It's incredible how one person can really make a difference for many," said Renton Landing marketing director Sallye Soltner. "It shows that the gift of giving can be contagious! We planted a seed of an idea and watched such an incredible cause bloom!"
The contagious blooming will now be an annual tradition: West Coast Pita and Gyro House have promised to donate the same amount each year.
"My philosophy is; it doesn't matter how much money you have. When you die you can't take it with you. When you leave, make sure you leave something good behind," Elmoussa said.
The good he is leaving by one seemingly insignificant phone call will impact thousands of lives at the Salvation Army this winter.