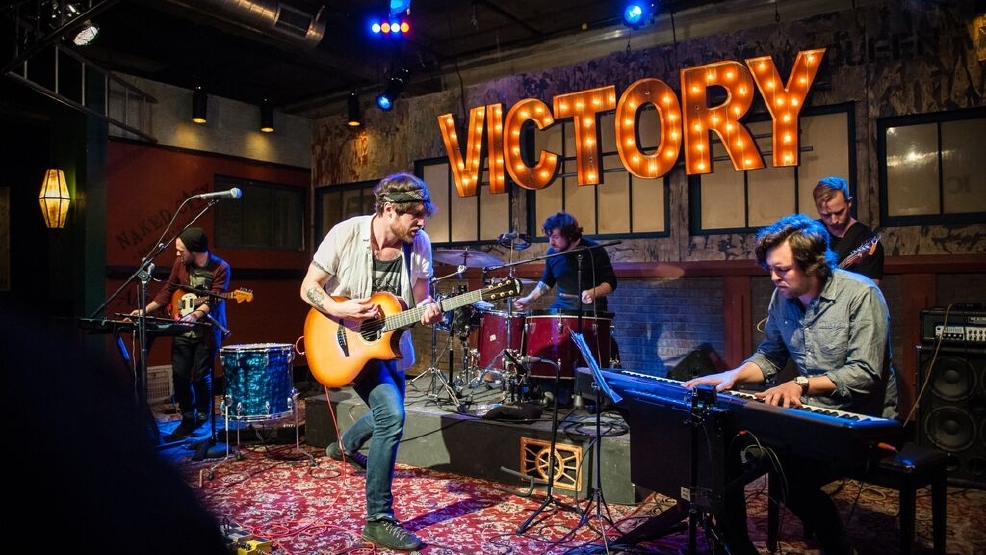 Conrad Denke, owner of Victory Studios and executive producer of "Band in Seattle" is probably one of the most interesting people I've met in this town. He took the time to show me around the gigantic Victory Studios consisted of every type of production, media, and music equipment known to man. He takes me through the editing rooms, the production rooms, as every turn has a poster of a past movie the studio has produced, or another award they've received for their outstanding work.


Denke casually mentions to me, "I was actually sworn into the air force in this same building during Vietnam." Back in the day, this building was used as a military post during the draft. Denke's history with this building is obviously long standing as he continues (with some prodding on my part) to discuss his days as the videographer from the sky where his last assignment was to film the troops coming back home from the war.


A Queen Anne and University of Washington alumni, Denke then goes on to tell me about his days in a folk band. They were pretty well known and even served as the house band for a weekly show shot down at the Seattle Center.


"Band in Seattle" is the first show to start Denke's vision of transforming Victory Studios from a service company to a full production machine.


"There are great stories that don't ever get told," says Denke. "I went to a couple clubs and realized how advanced these musicians are and how extraordinary the scene is in this city." Twenty-six bands were shot for the first season and "KSTW caught the vision immediately," according to Denke.


Not only do you get to see these bands perform in an intimate stage setting, but you get to hear the back stories of each individual band member. How they got started, what inspires them, how they find balance when the income can often times be non-existent, etc. Fans can see their favorite local musicians in their element and get drawn into their world. Then, that show content, including interviews and/or full length songs, is streamed and available world-wide with quello.com or the Band in Seattle Youtube channel.


"You get an insight into an artist that you normally wouldn't. You get to see the sacrifices these musicians make and all the work that they put into what they do, for little to no money."


In relation to the scene in LA to the Seattle music vibe, Denke says, "the work here is all collaborative. In LA, that doesn't exist! So where you may find great musicians, there's no music scene. There's no place in the world like Seattle! Because they have so much concentrated talent. I haven't seen competition here- I've seen collaborations."


Conrad Denke talks about the talent he's seen while producing this show (to basically no financial gain of his own). With a twinkle in his eye, he explains the importance of the stories that come from the stage to your screen. The passion of the producers,and of the artists and bands, creates a show that's beyond special. People doing what they love, simply because they can't not. which by Denke's definition, "is what true art is."


Witness true art coming up by tuning in, Saturday nights at 11pm on the CW11, and see all the amazing episodes that have aired so far at bandinseattle.com. The second leg of Season 2 airs September 5th.