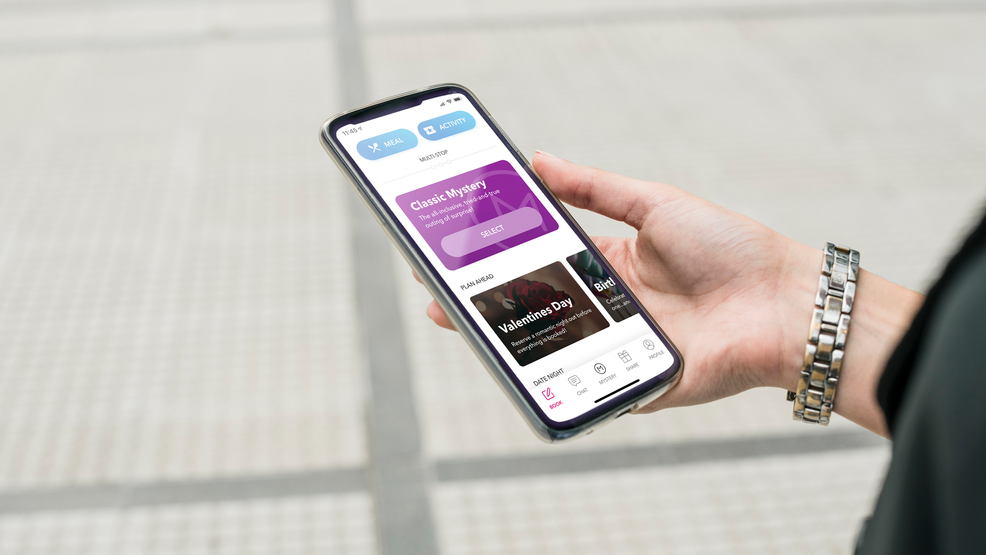 The entire date - from start to finish and everything in between - rests in the palm of your hand. (Image: Mystery)
SEE MORE

'Mystery' app plans date night for you, but keeps it a secret

The number one thing my husband and I fight over is, hands down, where we're eating out (or Postmating in, let's be real).

"I plan dinner every night," I will argue. "I don't want to choose the restaurant too!"

It's an endless loop we find ourselves in. And it's exhausting, deterring both of us from even suggesting a date night when the rare opportunity presents itself. With two kids under two, our minds, bodies and souls are wrecked by the time the weekend rolls around. Which is why a service that takes care of all the dirty work in dating was enough to pull me away from an ever-enthralling episode of "Bubble Guppies" and jump at the opportunity to give it a try.

Mystery does just that. It's a personal concierge service that plans date night for you. From choosing the restaurant to ordering car service, it's a digital butler without having to take out a second mortgage. Its process is seamless, simple and, as the name implies, a little secretive.

The first message from Casey, Mystery's concierge, arrived two days before our scheduled date night. He had some details he wanted to iron out. Timing, food preferences, attire. We texted back and forth with an easy rapport, and he helped finalize our date to our specifications and preferences. As our momentous PNO approached, the butterflies set in. The app detailed the general timeline, but didn't give away any specifics. All we knew was that we were leaving the house at 4:30 pm for an activity in West Woodland, followed by dinner around 6:15 pm in Old Ballard. Oh the possibilities!

"Headed towards Ballard?" our driver said as we slid into the Lyft. He had arrived at 4:30 on the dot. The app kept us apprised of his whereabouts with texts and real-time GPS, so we weren't surprised when the car pulled up to our curb and a text marked the commencement of our Mystery date.

The words were a revelation. A weight lifted. Needy babies left, temporarily, out of mind. An anxious energy flowed as we tried to guess where we were going, dressed, as instructed, in casual clothing, but specifically wearing closed-toed shoes. The mystery ignited a little fire in us through the shared experience of, for once, not holding the reins. Or, in our case, passing the reins back and forth like a hot potato.

In order to protect the identity of Mystery's partnerships and keep the surprise alive for you, potentially, I won't be disclosing the names or identifying details of our date. But the Caseys working behind the digital veil hit the nail on the head. The activity was interactive and unique, something neither one of us had ever done before. The fact that we wouldn't have necessarily sought it out made the experience all the more exciting.

When we finished at the first stop, another rideshare chariot whisked us off to dinner. Except it wasn't your average meal; it was a culinary surprise, a seven-course spread personally prepared by an award-winning chef. It was just us at the counter and the master across from us, creating the strange, yet delightful dishes that have won him recognition. I even knowingly ate a tart filled with duck feet, AND I LIKED IT.

At the conclusion of our meal, the push of a button summoned our final car ride back to reality. Our Mystery planners had taken care of paying for our activity and dinner, so we didn't have to worry about checking out or making any transaction throughout the night. We were home by our bedtime, and I didn't feel the heaviness that the I don't care's inflict on our usual adventures out, which is, perhaps, the greatest gift Mystery offers.

"People have option paralysis," Vince Coppola, Mystery's CTO and co-founder said. I spoke with him the Monday after our date night. His motivation for creating Mystery taps into an underdeveloped, often overlooked market: that of young professionals with money but without motivation for spending it on new places.

"There are too many options out there," Coppola continued. "It’s this ironic backlash to having all the options in the world available to you... We have Google. We have Yelp. We have Airbnb Experiences. These are meant to help with discovery, but instead they make you numb to all the options that are out there. Mystery choosing for you, its discovery implemented properly. It’s not just not planning; it’s not planning and getting to expand your horizons at the same time."

And if there's one thing Coppola understands, it's planning. Before founding Mystery, he was an early employee at Convoy, a Seattle-based startup often described as "Uber for trucking". As a software engineer, Coppola worked on operation tools for the ops team, helping match companies with truckers. There is a certain overlap in what he's done with Mystery, except he and fellow founder Shane Kovalsky, who also worked at Convoy where the two met, have created a product that matches customers with their ideal outing.

"The answer is constantly changing," Coppola said when I asked him the obvious question: just how much of the Mystery date model is human and how much is code they've written and set loose? "In the beginning, it was all human. We break down the different manual efforts into several different phases. The first one is the planning phase where we’re putting together the Mystery."

That, he says, is mainly human with the aid of computers. Worried if you book a second Mystery date that you'll be sent to the same places? No chance. They've accounted for that with a "fundamental, low-level block" in their system. It's also unlikely you and your friends or anyone you may encounter on a previous activity will be sent on dates that overlap with each other again.

And remember Casey from earlier? Believe it or not, there is an actual body behind the keyboard, fine-tuning the date and taking into consideration your responses to ensure that you are prepared for certain aspects of the night, like starting an hour earlier than originally set or avoiding oysters at dinner. This aspect of the experience makes it feel very VIP, and it is that level of attention and care that makes Mystery users eager to come back.

Once the date begins, however, it becomes generally hands off for those behind the scenes.

"90% of the Mysteries we 'set and forget'," Coppola said. "Everything is set up ahead of time. The messages all send at the right time. They work off of geofences, ETAs between your rides. The work is put in ahead of time and usually doesn’t require any manual effort. That being said, we do have a person standing by for exception handling and just in case you need them."

The true benefit Mystery offers is its niche market of Seattle's untapped potential. With a deep list of vendors with whom they've built strong relationships, the company and its small team don't go for the easy finds. They aim to give even lifelong Seattleites a look at the city they think they know, and that's made at all possible because of their own ties and knowledge of Seattle.

"We had the home-field advantage when we launched here in Seattle," said Coppola. "All of us grew up here, so we knew the area really well. My co-founder Shane is a very trendy person. He knew a lot of the hidden gems."

What's next? Coppola and team are hoping to expand to other markets, but what should excite fans of Mystery here in Seattle is their push to develop last-minute Mystery restaurant reservations. Think Amazon same-day versus their original two-day delivery model. With the click of a button, you can bypass indecision and make a Mystery reservation for dinner that very night. It is all the fun of Mystery with the benefit of booking hours ahead, not days.

And for any fellow parents out there, I did ask if "Mystery Babysitter" was in the works, to which Coppola laughed, but, without a beat, said, "We did some user testing with that concept. It just didn’t test that well."