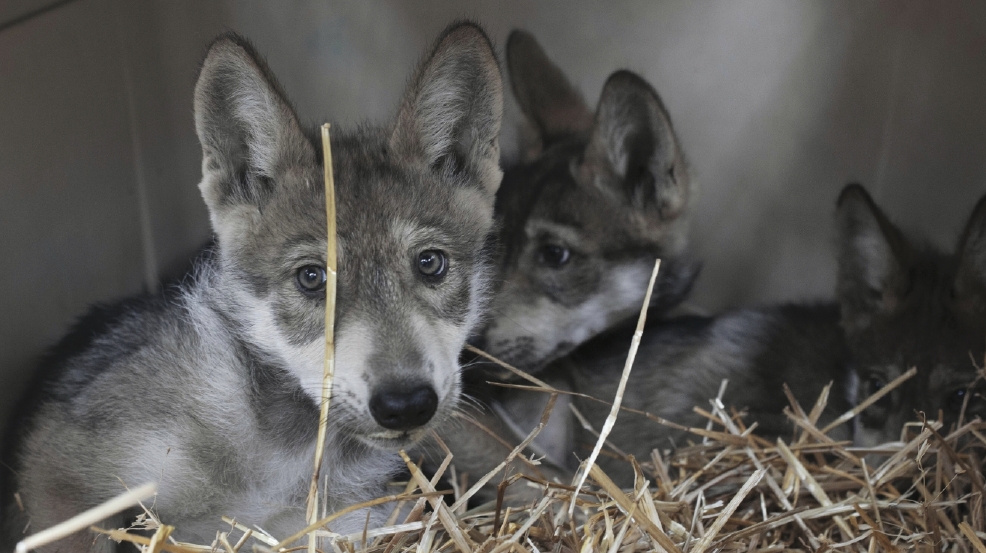 A new book of photographs hits shelves and stirs hearts while chronicling the lives of several of the many wolves who live at the sanctuary Wolf Haven International outside of Mt. Rainier in our great state. Photographer Annie Marie Musselman is one of very few given the opportunity to photograph these beautiful creatures, and her photos (you can see just a sampling in the gallery) are stunning in their intimacy. While we could try and come up with eloquent words to explain the power of this local book - the beautifully written preface by Brenda Peterson does a much much better job.

Their eyes find you first, often golden or dark green and amber-flecked with a fierce and surprising intimacy. Direct, intelligent, eerily familiar. Though these wolves in their refuge are no longer wild, there is nothing tame in their gaze. Instead, there is a rich and vivid emotional life that we can somehow read, not just because humans have lived closely with Canis lupus since prehistory, but also because the wolves mirror us. And even behind fences, they connect. First contact.

One white wolf’s stare is stunning — Bart commands our complete attention, even as he rests, with his lean legs almost casually crossed. Lonnie’s eyes are shy but steady as he peeks out from behind branches. His expression reminds us that in the wild wolves are extremely wary of humans and spend most of their lives hiding from us. Delicate Lexi with her flattened agouti-colored ears looks back cautiously at us as she retreats. Tala, the slender red wolf, steps so lightly and silently out of his hiding place that he startles us. Lowering his sleek mahogany head, he gives us a quick searching glance—and then disappears.

Even the abandoned wolf dogs — those who, as Wolf Haven’s director of animal care, Wendy Spencer, says, are “caught between two worlds” — haven’t lost the wildness or expressive depth in their eyes. Caedus, the lustrous black male wolf dog who shares his life with the delicate and somehow sad-eyed Ladyhawk, stands sentry; his buttery eyes both bold and curious. He might as well be perched protectively atop a remote mountaintop, scanning for his pups and family.

How many of us have actually ever had the privilege of looking into the eyes of a wolf? How many of us would ever know if a wolf was secretly watching us in the wild? We couldn’t smell them the way wolves can scent humans from half a mile away. We couldn’t hear them, unless they howled. Sight is the only way we sense a wolf, so they are at the advantage when it comes to sensory gifts. And even then, the wolf’s unblinking and powerful gaze is unusual in our species. Perhaps that’s why we stand riveted at the fence or in the forest when we catch a glimpse of this fellow creature.

“Wolves look right through you, don’t they?” a Yellowstone biologist once asked me in 1995 as we watched the first reintroduced wolves, the Soda Butte family, scamper with their pups and stride across a high meadow. Even from half a mile away, the wolves were keenly aware of our presence.

“Yes, they do,” I breathed, barely able to hold the telescope, my hands were trembling so.

Yes, I still feel that intense energy running between wolves and humans every time I visit Wolf Haven and encounter these animals who have found a retreat here since it opened in 1982 — giving sanctuary to over two hundred gray and red wolves, plus wolf dogs and even coyotes. We recognize ourselves in wolves — our own hungers, passions, violence, and tenderness. Anyone who spends time with wolves understands that their social dramas—who’s in, who’s out, who’s on top, who’s struggling to survive, who’s ailing or lost, who is thriving — are as fascinating as our own. In the wild, wolves live in close-knit and complicated families. They are affectionate and loyal to their young, and the whole group cooperates to survive together. At Wolf Haven these often abandoned, abused, mistreated, and misunderstood wolves are given another chance, not only at living, but also at intimate relationship with one another.

A lone wolf is a rare wolf. All you have to do is hear a wolf howl to intuitively know that wolves always seek community. Just like their profound eye contact, the wolf’s howl is a language of loss and longing—and sometimes even joy—that we also instinctively understand. As you enter this book of Canis lupus portraits and stories, remember that you are in the presence of an animal who has always belonged very near us. Another top predator who has inspired in us both passionate devotion and unjustified cruelty. Another animal who even in a shelter is very much our equal: a spirit that can still hold and forever meet our eyes.

You can purchase Wolf Haven online at Sasquatch Books for $24.95. *(c)2016 By Annie Marie Musselman and Brenda Peterson. All rights reserved. Excerpted from Wolf Haven: Sanctuary and the Future of Wolves in North America by permission of Sasquatch Books.