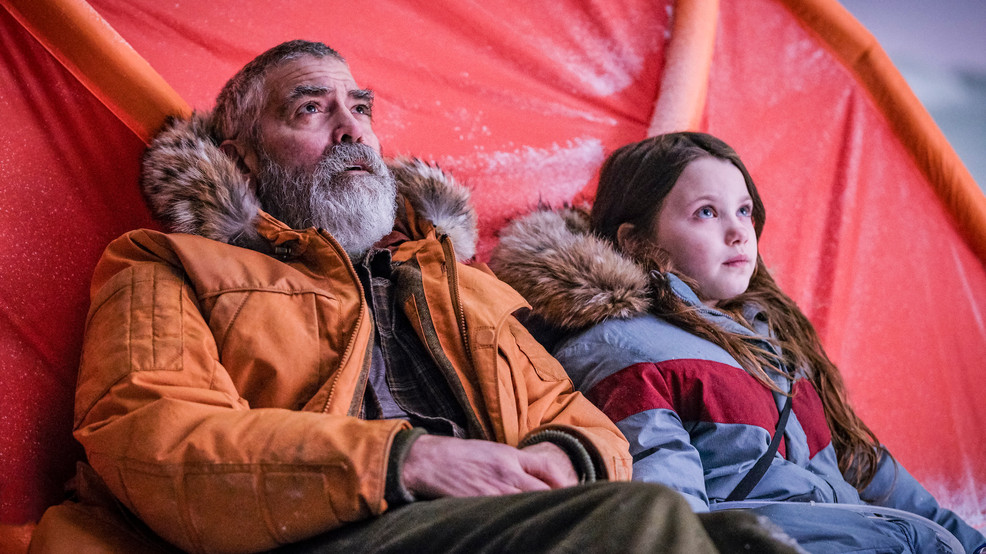 Review: 'The Midnight Sky' has a lot of parts that don't equal a whole

If films were math, "The Midnight Sky" would add up. A dying planet, humans in the midst of near-extinction, a grizzly, terminally ill space scientist, a mission to trek across the Arctic Circle's perilous tundra and a crew in the outer reaches of the solar system fighting to return to a home that no longer exists. The one-liners are truly limitless.

Unfortunately, cinema is not algebra, and "The Midnight Sky" is a consortium of parts that don't equal a whole. This is a disappointment as George Clooney not only stars in but also directs a film that is visually stunning with compelling performances. However, even those elements can't keep the spaceship from sinking. The film based on the book by Lily Brooks-Dalton feels familiar, making it difficult to pinpoint why exactly it doesn't leave the same impact as other works in the sci-fi genre. It is surely reminiscent of "Gravity", which starred Clooney as a space pilot fighting to return to earth, "Interstellar" with its emotional, familial draw and even "Aliens" with the lost little girl slash sidekick component.

So here we are with "The Midnight Sky" which has something for everyone, yet perhaps not enough for one person. Clooney is the comically named Augustine Lofthouse, a space pioneer who has spent his career searching for a new home for when humans outstay their welcome on earth. As he fights terminal illness with blood transfusions and one final mission, the world is disintegrating alongside him in an undisclosed climate crisis. "The event" that sends the earth's masses scrambling "underground" is never fully explained, and the film doesn't care about those details. Suffice it to say, the world dies in 2049. What happens next? How do humans make it to the other side? What does humanity look like, and where do we go from there?

Yeah, so the film isn't really about any of that either. Augustine, who stays behind at the outpost to see things to the end, makes the troublesome discovery that he is not, in fact, alone. Iris (Caoilinn Springall) is a young girl left behind by those fleeing the station. She won't speak, but she finds comfort being in proximity to the sick scientist. When Augustine realizes he cannot communicate with the voyagers on Aether, a shuttle unknowingly making its way back to an uninhabitable planet, he and the girl must trek through the freezing landscape and nearly unbreathable atmosphere to reach another station with a working satellite.

That's one side of the coin. The other details Aether's crew: Adewole (David Oyelowo), his pregnant partner Sully (Felicity Jones), newbie Maya (Tiffany Boone), loud mouth Mitchell (Kyle Chandler) and sensitive thinker Sanchez (Demian Bichir). In a mission derived from Augustine's work, they have just explored one of Jupiter's moons in the hopes that it could be compatible for human life. Their path home is fraught with obstacles, like the large balls of space ice that wreak havoc on their shuttle. The team must band together, survive the cruelty of outer space, yada yada yada. There is a twist at the end that attempts to tie up the two very separate storylines, but the intertwining is a little too late to leave any lasting impression.

These dueling storylines keep the film from feeling cohesive. What is at stake - saving the space travelers from a terrible fate - never takes precedence. Despite the very pressing matters at hand, the film conveys little sense of urgency, meandering its way through artificially tense sequences and moments of emotional revelation that simply, sadly fall short. The performances are solid, what you would expect from the likes of Clooney, Jones, Oyelowo, et all. And there are plenty of beautiful shots (of the space station, the astronauts moonwalking on its exterior to make repairs as Alexandre Desplat's harmonious score plays like a calming moment of zen), yet the thrill of a film about a futuristic space odyssey and a global apocalypse is that it will raise your blood pressure waiting for the gratifying finale. You shouldn't (and won't) hold your breath for this one.