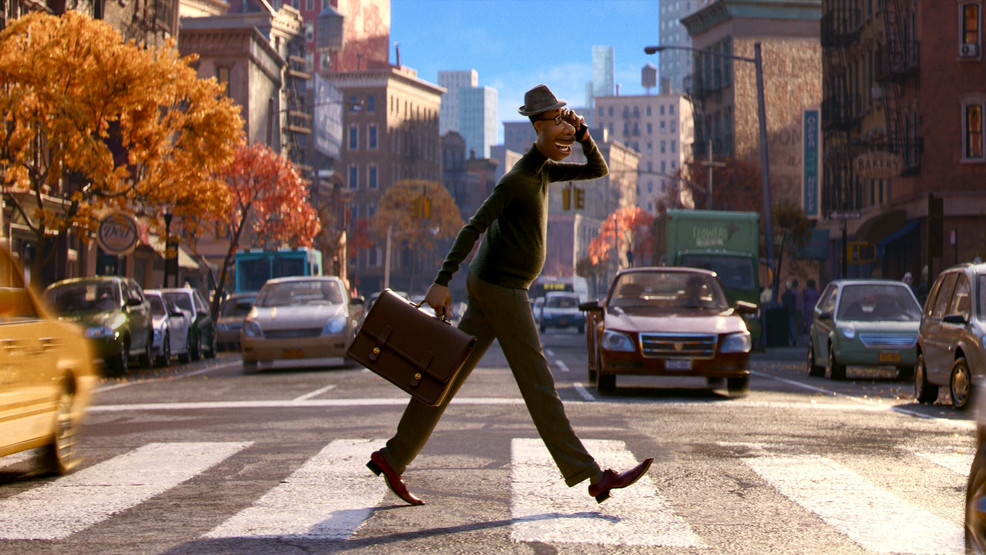 Pixar has never been scared to "go there". They tackled miscarriage and infertility in the first five minutes of "Up", the afterlife in "Coco", a child's burgeoning emotions (teetering on depression) in "Inside Out" and, just this past March, the loss of a parent in "Onward". With its 23rd feature film, Pixar is making its own history: featuring its first African-American protagonist with a story immersed in the Black experience, mingled with some telltale Pixar emotional, existential, intangible gobbledy goo.

"Soul" stars Jamie Foxx as Joe, a part-time high school music teacher who works to support his passion: jazz piano. He has true talent - soul, if you will - but his luck hasn't stretched far enough for him to catch a break. Until one day a former student refers him to fill in for the pianist of big wig jazz player Dorothea Williams (Angela Bassett) and her quartet. In the audition, Joe is in his element. It's a real "La La Land" moment wherein all else fades away, and he is allowed to live in the the music.

That moment of enlightenment is short-lived. Joe, on cloud nine after impressing Dorothea Williams, walks into an open manhole and, sadly, dies. Yes, I know. Pixar, you scoundrels! Why does someone always have to die? But Joe isn't gone, not yet. Not totally. His soul, represented in this film by a small, hovering, cyan figure with rounded features, is on the conveyor belt to a bright light, but Joe doesn't plan to pass on without a fight. He escapes to another part of the afterlife that is more of a "before" life, where young souls are given mentors and made to find their "spark" before they are able to inhabit a body down on earth.

Impersonating one such mentor, Joe is assigned 22 (Tina Fey), a lost soul who has been trying to find her raison d'être since pretty much the dawn of man. She has given up on living as a human on earth, even before she tries it, preferring instead the safe, familiar confines of the ether. After a mishap and mix-up, both Joe and 22 are sent back to earth, but not in the ways or forms they expected. The twist isn't revolutionary, but I won't spoil it here either. The fun of Pixar films is how their creators, in this case writer-director Pete Docter, the company's chief creative officer, humanize characters and situations that could otherwise be handled with less grace and tact.

Joe and 22 continue their journey, learning in the process what it means to lead a life worth living. Pixar has been known for its appeal to adult audiences. You can't watch a Pixar film without chuckling at the jokes that go over your children's heads. They've had some recent hits that have teetered on being, perhaps, too intellectual for particularly young kids to enjoy. "Inside Out", for example, dealt with very abstract ideas about emotions and behavior that, were it not for the funny-looking characters and clownish pink elephants, would have lost most children completely.

"Soul" takes it one step further, eliminating the young protagonist with whom an adolescent viewer would normally identify, introducing in its stead a teacher figure that children may at least recognize and a lovable, domestic animal. Both reassuringly familiar figures soften the plot and provide comic relief.

The meat of the film, however, is thoughtful, inventive, enlightening, but still quite heavy, both in concepts and subtleties. The world and characters that Docter builds are rich with heart and complex in ideas. Foxx and Fey are a fearsome duo behind the voices, providing the right notes of humor and deep emotional resonance that will make you feel good by end credits, but may not allow your little one enough childish fodder to make it there with you.

"Soul" is available to stream on Disney+.