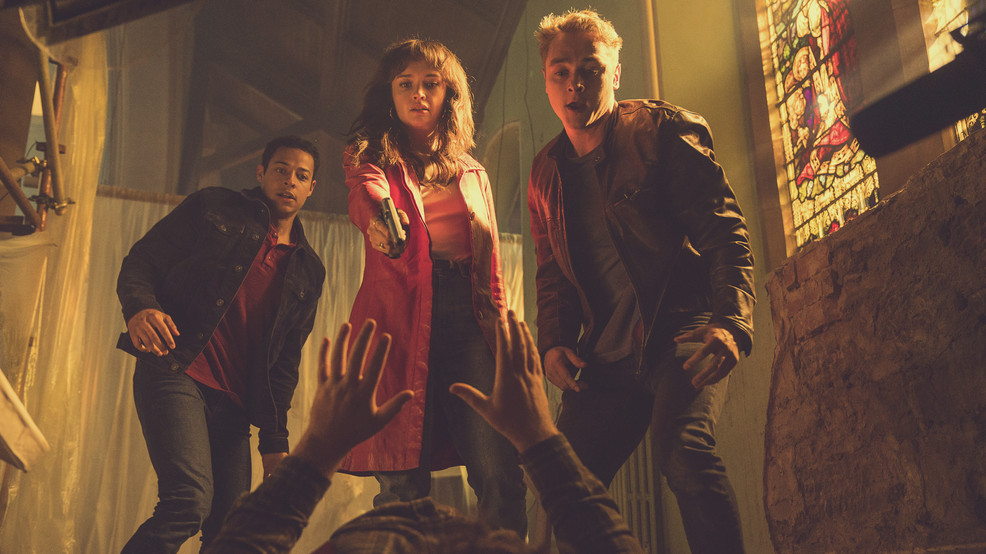 Review: 'Pixie' has us asking a loooot of questions

"Pixie" is a hard one to pinpoint. Equal parts crime drama and revenge thriller with a heavier portion of Irish comedy, it's one of those movies where you know why you didn't like it, but you can't explain why...you maybe didn't mind it after all. At the basest of levels, this is a story of a fantastical female mastermind who uses men as pawns to either get them killed, get them in trouble with the law or merely leave them cursing the day she was born. The actual crimes committed and the exact motivation for her revenge plot is muddled at best, and Pixie, with all her feminine wiles and street smart intuition, is hardly the hardened vigilante. In fact, for a gritty action thriller, it is not the mystery, the drug trail or the bloodshed that keeps our focus in the film, but the dry British humor and the magnetism of the actress starring as the titular character.

Because there is certainly something quite charming about Pixie (Olivia Cooke), and when credits roll, you find yourself second-guessing all the faults you found - Alec Baldwin as an Irish priest slash drug dealer being one of many - and lamenting the greater crime against the film which is that Pixie, like the creature from folklore, riles up those around her and causes mischief without giving us much of herself. There's plenty of talk about Pixie - who she's dating, who she's not dating and rumors that she likes to photograph her partners in the act of lovemaking - but the truth is far less glamorous. She's an artist trapped in a small town, looking for the nearest exit to escape the trauma of her mother's death several years ago.

The situation is sticky. Her ex-boyfriend and current fling steal a comically large duffel bag of white-powdery drugs from a ring of crime-enthusiastic Catholic priests. Those drugs (estimated to be worth a million Euros on the street "according to Google") fall into the unwitting hands of Pixie's new friends Frank (Ben Hardy) and Harland (Daryl McCormack). They aren't members of any mafia group, and they are far too naive and inexperienced to physically handle the goods, let alone coordinate a deal. Pixie, never letting her hand show, jumps into the thick of it, wielding her girlish allure to get what she wants and her insider know-how (her stepfather played by Colm Meaney is a leader of the gang who stole the loot from the holy syndicate to begin with) to oversee the amateurs and save them from their potentially lethal folly.

There are obvious influences at play in "Pixie". You may see quick wit, graphic action sequences and a storyline that revolves around sex, drugs, gangsters, etc. and be eager to call an audible "Guy Ritchie". But there is a greater argument to be made that the film uses the slate of writer-director Edgar Wright as its muse. It veers from monologue-heavy scenes of characters fighting over innocuous, everyday things to unexpected murders at the hand of rash ex-boyfriends to hurriedly explaining key background color for our main character. The action sequences and frequent shoot-outs are highly stylized - plenty of close-ups and quick edits - but it is the script by Preston Thompson that balances intrigue with humor, action with slapstick that draws directly from "Hot Fuzz" or any number of other works from Wright's filmography.

Despite the high concept, ambitious story, the specifics of the plot aren't particularly clear, and as the viewer, it is common to find yourself asking where each scene is leading. How do these relate to the story as a whole? What is Pixie's real role in this thing again? The story finds its flow, but never manages soaring highs or bottomless lows, opting instead for a very moderate stream of content that offers some laughs, a mystery with bouts of action in a film that at least never sits too long in its own stink. But it is a novice whack at a story that could use help in highlighting its subtleties and cleaning its message.

"Pixie" is available on Premium Video On Demand.