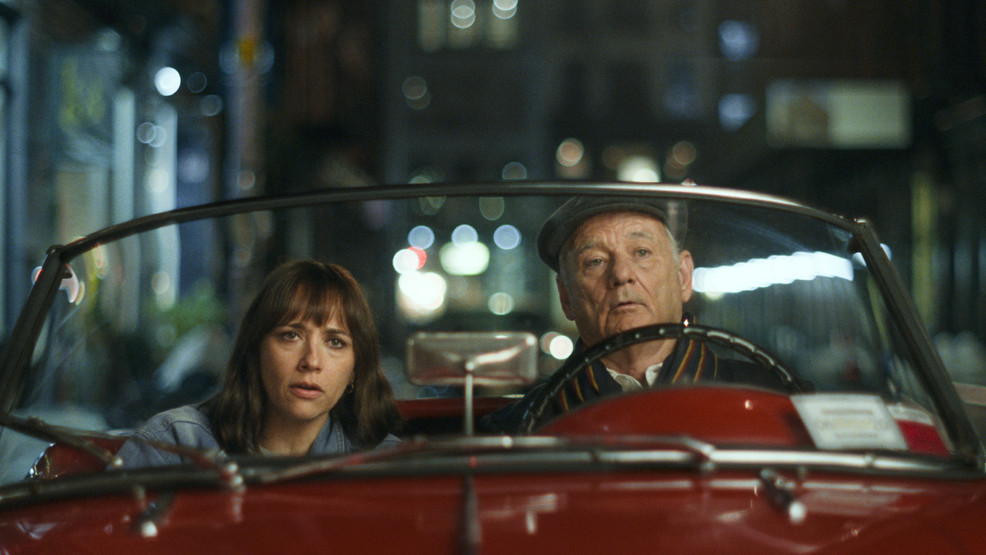 Rashida Jones and Bill Murray in "On The Rocks," premiering October 23 on Apple TV Plus. (Image: A24)
SEE MORE

Sofia Coppola has an unmistakable eye for unconventional relationships. Typically - for at least two of the seven feature films she's written - one of the players is Bill Murray and the other is a pretty, young woman drowning in a relationship.

Much like "Lost in Translation", the film that won Coppola an Oscar for Best Original Screenplay, "On the Rocks" presents us with the next chapter in the writer-director's unofficial (semi-)autobiographical anthology (of sorts). That former film was rumored to have been about her marriage to fellow director Spike Jonz. This time, she's hung up the search for meaning in her twenties with a fledgling marriage for a more mature Laura (Rashida Jones), a months-from-turning-40-year-old writer who has taken time off to be a mom to her two girls. As her kids are getting older, Laura dips her feet back into work, but the novel isn't writing itself like she had hoped. Instead, she finds that writer's block allows her the time to organize her desk and obsess over the growing unease she is feeling in her marriage to Dean (Marlon Wayans), an entrepreneur at a tech start-up.

Similar to Coppola's own father, famed filmmaker Francis Ford Coppola, Laura's father Felix (Murray) found immense success in the art world. Felix has a dedicated driver and memberships at swanky dinner clubs. Now semi-retired, he finally has the time to focus on Laura and aid in, often instigating, her mid-life crisis. Dean has been acting strangely, though it's hard to say how much is his jet lag from constant business travel or the couple's own disconnection from each other that has formed organically as life has plowed on. She is focused on the kids; he has later and later nights at the office with his attractive assistant.

Regardless, she is wary of his lackluster affection and increasingly suspicious that infidelity is the culprit. Felix stokes the fire, taking pleasure in concocting ridiculous stake-outs and undercover surveillance of his son-in-law. When it leads the pair to Mexico where Dean is on a work trip, Laura can no longer hide her fear and her emotions behind the charade, forcing her to terms with her insecurities and the feelings she has towards her father that have been buried deep for far too long.

Coppola knows how to write women in a state of flux, caught in the process of aging and struggling to surmount some new obstacle from whichever stage of life. We saw it in her first feature film "The Virgin Suicides" which explored that tender time between adolescence and adulthood; "Lost in Translation" starred Scarlett Johansson as the soul-searching twenty-something trying to understand where she was going. And we see it here in Laura, thanks handily to Jones' beautiful timing and the softness with which she shows up on screen. She isn't made weak or crazy, in the traditional, however backwards, sense when speaking about a woman. Dean is, after all, acting suspiciously, avoiding intimacy and oblivious to the effect his absence is having on his family. Laura is delicate in a way that is very particular to being a woman of a certain age, and we can't help but adore her for it.

But the performance that seals the deal in this charming, understated comedy is Murray's - which is about as opposite of understated as you can get. He is slap-stick funny, hold the banana. He arrives for a stealth surveillance assignment in a showy, red convertible coup he doesn't know how to drive properly. He recites stories and obscure anecdotal facts in long monologues like it's something he would say in his everyday life. And there is that feeling that, perhaps, this is the most Bill Murray role that Bill Murray has ever played.

Then, just as we think this is all he is going to do, he reveals his big acting guns and woos the heck out of the audience with a heartfelt, poignant breakdown. The pairing of the two, Jones and Murray, is seemingly kismet, their father-daughter chemistry a dysfunctional dream. Wayans is affable as Dean, an easy target we want to hate for his assumed actions.

But the film is not about infidelity, not really. Laura is the one "on the rocks", approaching a big birthday that brings to the forefront all her fears about aging: no longer being needed by her children in the way she once was, being undesirable to her husband, and, now, suddenly reliant on the father who was absent much of her early life. Like a hard drink prepared a particular way, "On the Rocks" hits the right notes and packs the powerful punches that elevate this unromantic-comedy above the genre.

"On the Rocks" is available on Apple TV+.