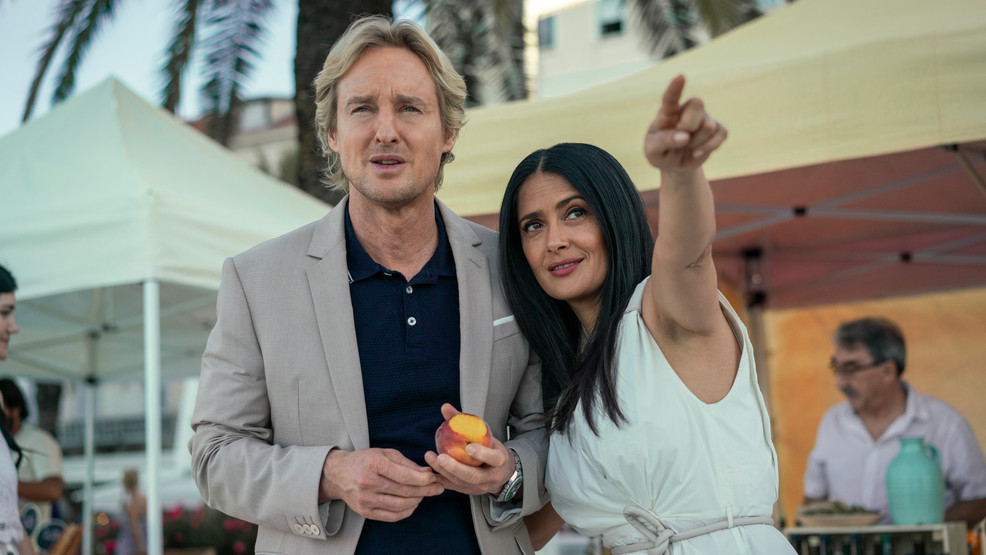 "Bliss", which stars big names Salma Hayek and Owen Wilson, is still swirling around my mind days later, and not quite in the can't-stop-thinking-about-it, wow-what-a-work-of-art kind of way you'd hope. The film is a sci-fi drama with romantic implications - kind of? - that follows Greg (Wilson) recovering from a recent divorce and dealing with a mental health crisis, as he, fueled by drugs and encouraged by his manic new friend, awakens his mind to the possibility of a new world, one in which he is a player in a simulation and his return to the "real" world is just a matter of shooting crystals up his nose.

"Is it like "The Matrix"?" you may ask, to which I would say quite firmly, no. It is more like if "The Matrix" met "Limitless" met "Eternal Sunshine of the Spotless Mind", but didn't do any of those films and their genres adequately, leaving much of its plot and characters open to frustrating interpretation and ulterior metaphors that conflict with one another. Set in a vague, generic copy of our world, the film follows Greg as he struggles to focus on his job and loses track of his grown children (Nesta Cooper, More Lendeborg Jr.) who are at the end of their complicated rope with him as well. Greg doesn't have the self-awareness to realize that, however. He can't work because he frequently gets lost in thought or spends hours drawing stills of his "dream home", leading to an inevitable termination at <insert generic tech company name>.

Weird things are happening. Seemingly real, solid items flicker like holograms. Greg inadvertently knocks his boss unconscious and ties him to the window without anyone noticing. Identical pedestrians on the street flit into existence, appearing through an invisible portal and continuing to march on like robots, one by one. None of it really makes sense until Greg meets Isabel (Hayek), a street grifter with "special powers" that allow her to make objects move. She lives in a bohemian hideout sheltered beneath crossing highway underpasses and "has a guy" who provides her with mysterious, comically large crystals.

If none of this adds up to you, don't try a recount. Watching "Bliss", particularly in its initial half, felt like screening a novice stab at science fiction. It leaves you unsure of what world, future or universe it is supposed to be set in, the answer is, even upon finishing the film, somewhat unclear. A case could be made for a number of probabilities, the likeliest being that we are seeing the world through Greg's perspective, high on drugs and all, but that is still not conclusive and certainly not a satisfying answer.

Isabel is convinced that the world they think they are a part of is merely a simulation, one they must exit before they lose sight of the truth and remain stuck in this dystopian, user-unfriendly game forever. By snorting the crystal, they are dispelled back into the real world, beautiful and clean, filled with happy people and the brightest minds in the world. Bill Nye is even there, because of course he is. In this world, Isabel is not an untrustworthy, part-time street walker, but hot-shot Dr. Isabel Clemens, a popular figure in this community who is fighting against skeptics to prove that her creation is the answer to solving the problem they have here in paradise: becoming so used to utopia, that perfection no longer makes them happy. The simulation containing Greg's life as a divorcee and father was apparently created to give those living in this utopia a better appreciation for all that they have. The dirty, grittiness of the simulated world is, hypothetically, to escape the pristine world they've created IRL and gain a new perspective.

In terms of our perception as the viewer, neither world feels "real" enough to fully commit our belief in them. Greg is a wandering buffoon, easily convinced of anything Isabel flings at him. This leaves us in a precarious position, weeding through the bits of metaphor and meaning embedded in the film, none of which is cut-and-dry. Like a cardboard cutout the film feels flat, fake and unappetizing. We are forced to guess at the filmmaker's intention. For some, this may be an enjoyable, exciting watch, a choose-your-own-adventure as you narrow down if Greg is actually in a simulation, or, more likely, a drug addict riding a perpetual high. Either way, we don't particularly care by film's end. Our relationship with Greg is superficial at best. At worst, we dislike him and have no compassion for his predicament.

Unlike the aforementioned Charlie Kaufman-penned cult classic which asked interesting, philosophical questions about human nature and our need for attachment, this film by writer-director Mike Cahill takes the old adage, "ignorance is bliss", and contributes nothing to its allusive undercarriage, choosing instead to trample us with curated emotions, images and a catchy twist then leaving us with primary questions central to understanding the film and to bonding with its characters. Questions like why, when, how, where and... what?