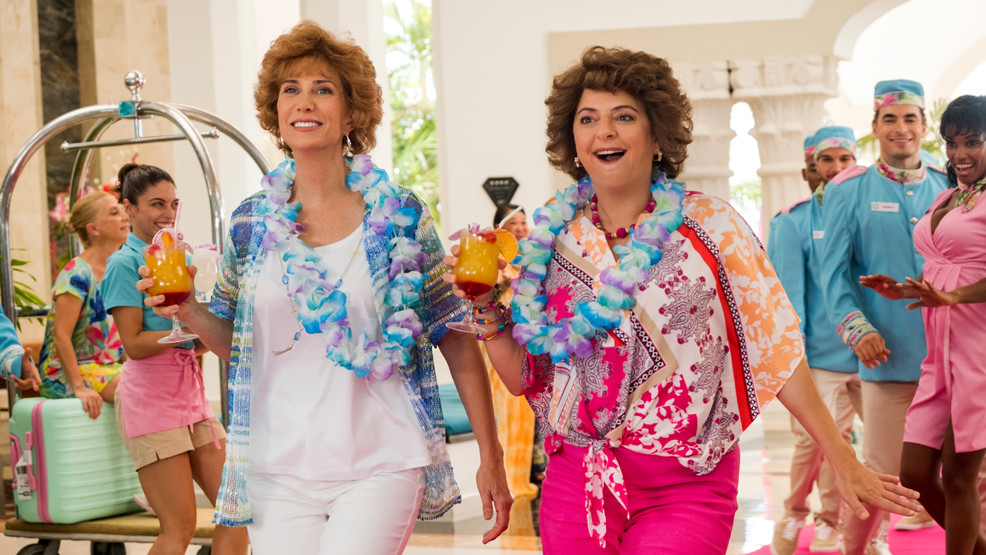 Review: 'Barb and Star Go to Vista Del Mar' is a tad messy

At its core, "Barb and Star Go to Vista Del Mar" is not the worst conceit Hollywood has inflicted on paying audiences. Coming from an SNL alum in a film that relies almost completely on a comedian's ability to play a silly, hyperbolic part, it's safe to call an Adam Sandler-audible and say we've seen far, far worse. Kristen Wiig takes on perhaps her most popular character: a hokey middle aged Midwesterner, here named Star. Her lifelong friend Barb is played by Annie Mumolo, known best for co-writing "Bridesmaids" with Wiig, and the two are the driving force behind this goofy little film that doesn't quite fit into any genre, but still will appeal to fans of off-beat, slapstick, gag-centered comedies.

Sorry Barb and Star. That is where the praise ends. This is a messy film that boasts a weak plot and just two interesting, likable characters. The only jokes that really hit their landing are the ones that mock Florida and an entire population of people from the Midwest. Barb and Star are besties from Nebraska. Wiig and Mumolo wear their fluffy wigs, high-waisted pants and sweet, slow cooker accents with both a reverence for their real-life inspiration and a knowledge of where they can push the knife in a little deeper, pull the jokes a little longer.

They work at a local furniture store, but spend the better part of their shifts gossiping on the couches and dissuading customers from buying their favorite loveseat. When the store goes under, the gosh golly sweetest twosome are forced to reevaluate their lives. Where else do people too old for Vegas go to party? Florida, obviously. Vista Del Mar is a vibrant beachfront town with a resort that puts on a glamorous musical number as guests check in. There's an all-you-can-eat buffet and decor that looks like a seashell vomited from wall to wall. It's a magical place where everyone is more beautiful than they are in their real lives and anything can happen.

This plot line and whatever hijinks the two lady friends could conceivably get into at a ridiculous seaside glorified nursing home could have been enough. They could have gone all in on that story, and Wiig and Mumolo could reasonably have carried the weight of delivering the funny without a strange, emotionally-unavailable subplot to pollute the well. Because unfortunately there is a strange, emotionally-unavailable subplot wherein Wiig also stars as ironically named Sharon Gordon Fisherman, a maniacal villain with an ominous bob haircut, V-cut bangs, a large gap in her front teeth and befuddling white face (her face and body are literally painted an opaque stark white). Her ambition is to destroy Vista Del Mar as revenge for the endless bullying she endured as a child. Her henchman Edgar (Jamie Dornan) is a simpleton so in love with the evil mastermind, he agrees to plant a receiver under the stage at the "Seafood Jam" event that will beckon hordes of poisonous, killer...mosquitos.

Yes, her plan is to kill the town of Vista Del Mar with their own state bird. Barb and Star unwittingly insert themselves into the murderous plot when they spend a drug-fueled night with Edgar who toys with both women, but soon finds that his connection is strongest with Star. Dornan, for his part, really commits to the gag, gyrating in the sand and belting out his musical numbers like it's the part of his life. To say the premise is flimsy is an understatement, and Wiig also starring as Sharon seems to serve no real purpose except to give us more Kristen Wiig screen time. We relish in Barb and Star as characters, and find that the majority of the laughs in the film are thanks to their conversations about an imaginary woman named "Trish" or the ridiculous "talking group" meeting held with like-styled Nebraskan women (featuring comedians Vanessa Bayer, Fortune Feimster, Rose Abdoo and Phyllis Smith).

The set-up, the ruse, the manufactured murder plot. In all its outlandish glory, it only manages to steal time away from the headliners. It's self-inflicted, as Wiig and Mumolo have also co-written "Barb and Star". We yearn for more home-grown humor, the kind that lightheartedly pokes fun at popular stereotypes for the many personalities in this country, revealing truths and . Instead, we are left wading through an odd-ball romance, a stunted action-adventure, too much Vista Del Mar and not enough authentic Barb and Star.

"Barb and Star Go to Vista Del Mar" is available on Premium Video On Demand.