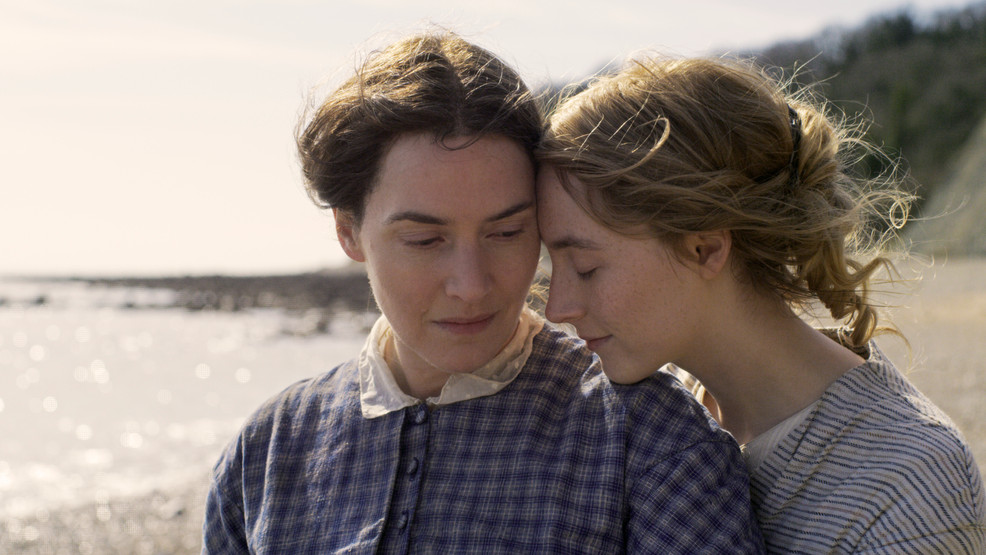 Review: 'Ammonite' has great heart, despite dreariness of its setting

Are rocks an aphrodisiac?

This is the primary question that flitted through my mind during "Ammonite", a period piece starring Kate Winslet and Saoirse Ronan that saw the two digging for the skeletal remains then making love, like their discoveries of the fossilized shells ignited and sustained some unusually rock-y passion. It's a lesbian love story that has great heart, but can't quite escape the dreariness of its setting and the bipolar emotions of its protagonist. It is going to draw the obvious comparisons to "Portrait of a Lady on Fire", a film from earlier this year also set hundreds of years ago and highlighting a passionate affair between an aristocrat and the artist commissioned to paint her.

However, not all same-sex love stories are the same, and these two perhaps are the greatest example of such. Each is centered around a natural element: "Ammonite" in rock, or earth if you will, and "Portrait" in fire. Though earth is safe and grounding it makes for a pretty lousy romance, and "Ammonite", which sees its characters struggling for warmth on the freezing beach in the cold, windy, gray town of Lyme Regis on England's southern coast, suffers this frigidity from the inside out and all the way through its runtime.

Though it is not just the bleak setting that prevents the film from garnering any warmth with the audience. Winslet's character Mary Anning, based on a real-life 19th century paleontologist of the same name, is a somewhat manic spinster. She spends her days either caring for her ailing mother (Gemma Jones) or on the windy, humorless seashore, ravaging her hands as she digs for fossils or putting her body in jeopardy as she climbs steep, perilous hills for a prized item. Like her subjects, she maintains a very tough shell and is hard pressed to let even a small smile loose.

Charlotte Murchison (Ronan), also based on real-life figure and Anning's contemporary in the field, has arrived in Lyme on doctors orders with the hopes of combatting her "melancholia". She has recently lost a child, the details of which are not fully explained, and she wears black hooped dresses, corsets and bonnets, paired with her constantly watery eyes and a moody disinterest in everything. Her husband (James McArdle), a man of the times, leaves her in this coastal town while he continues traveling for work, though not before making a financial arrangement with Mary to keep an eye on his wife and take her out on daily excavations along the seashore.

Charlotte is subjected to brutal prescriptions to lessen her depression. One such doctor's order is to take a dip in the freezing ocean, which in turn gives her a terrible cold. Luckily, Mary is there to nurse her back to health and then introduce her to Lyme's social circles of which Mary is wary. She doesn't care much for other people, it seems, and enjoys the solitary work of fossil hunting. Rocks can't truly disappoint you the way that people can.

Winslet has the unfortunate, or perhaps fortunate depending on your perspective, task of playing Mary who goes about her business and interactions with a consistent level of joylessness. Even in the heat of passion, she has her guard up, one eye on the door for fear of being found out. There is sexual tension and implications of history with another acquaintance in town, Elizabeth Philpot (Fiona Shaw), yet another real-life female paleontologist, who dangles an invisible line over Mary's head. But it is Mary and Charlotte who form an unbreakable connection, one that, despite Charlotte's marriage and Mary's sense of decorum, can possibly weather even the rockiest storm.

In real life, there is no indication that Mary and Charlotte were anything more than friends. Murchison came to Lyme with her husband, who was studying geology in London, but didn't stay for too long. They continued to write each other letters, though there is no evidence it was more than a platonic friendship. Perhaps this is the most frustrating part of "Ammonite" - here is a woman who was quite successful at what she practiced, discovering prehistoric creatures before anyone else, only to have the credit stolen by other male scientists at the time. While she was alive, she saw no fame or fortune or even mere recognition for her life's work. She's a fascinating woman, and yet the first film made about her life glamorizes who she may (or probably didn't) sleep with? We have no idea of Mary's sexual orientation, let alone whom she allowed her bed. Her legacy, unlike how she actually lived, will put her love life before the work she did tirelessly and until her death.

That isn't to say her story couldn't have included this fictional romance. Winslet and Ronan have a certain spark - together and as actresses in their own right - that glues your eyes to the screen. But the film's debilitating flaw is that we hardly understand Mary Anning or her real-life motivations. The history of both Mary and Charlotte and the work that brought them together in the first place are just half-hearted footnotes in the film.

Written and directed by Francis Lee, "Ammonite" uses the allegorical fossilized mollusk to make a statement about what was once forbidden love is now merely underrepresented. Love stories between two adults of the same gender or different races or ages or any number of things have, in the grand scheme of entertainment, hardly been told. However, like an ammonite, they have been around for...ever? So perhaps that is the silver lining message Lee conveys through his film: the stories we've been told our entire lives have never been the whole story. And perhaps Mary and Charlotte, wherever they are, are smiling knowing that there was some truth in "Ammonite" and that stories like this are finally reaching audiences.