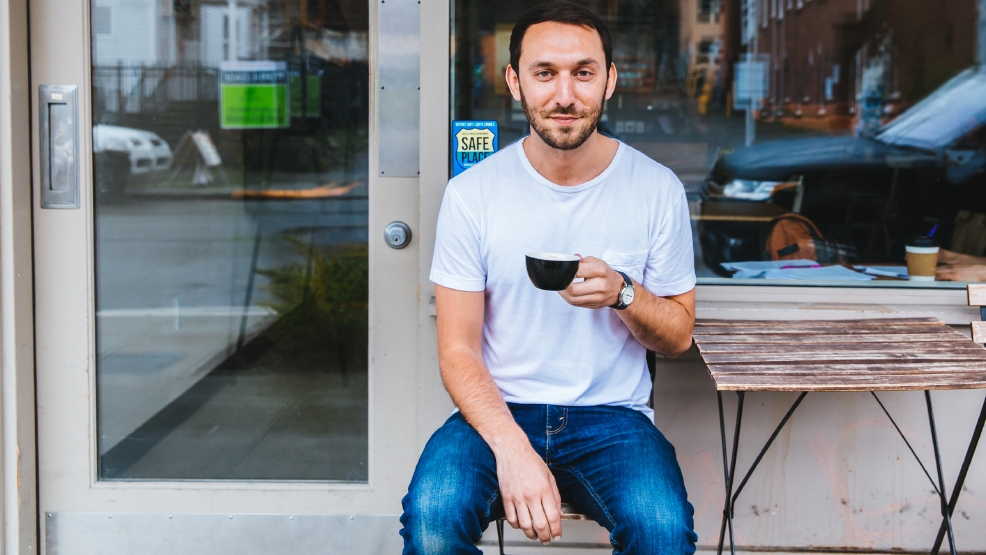 Nearly ten years into owning one of Seattle’s favorite independent coffee shops, Zack Bolotin is more than a successful businessman and coffee lover. His shop, Porchlight Coffee & Records, is a Capitol Hill favorite on the edge of the Pike/Pine corridor, where he doles out espresso and cold brew alongside hand-selected vinyl in a bright, welcoming space. But get to know the man behind the counter and you’ll find an artist, a curator, a record label, and more. (Image: Sunita Martini / Seattle Refined)
SEE MORE

Nearly ten years into owning one of Seattle’s favorite independent coffee shops, Zack Bolotin is more than a successful businessman and coffee lover. His shop, Porchlight Coffee & Records, is a Capitol Hill favorite on the edge of the Pike/Pine corridor, where he doles out espresso and cold brew alongside hand-selected vinyl in a bright, welcoming space. But get to know the man behind the counter and you’ll find an artist, a curator, a record label, and more.

"The whole process has been a pretty big learning experience,” says Bolotin, who opening Porchlight in 2009. His patience served him well, though, and he’s managed to create a community-oriented vibe while still actually making money and paying the bills. His social media presence is reciprocal with his customers, who often post beautiful shots from the shop, or at home with their beloved Porchlight gear. But he also hosts Porchlight Christmas parties and anniversary softball games, all while doing plenty of his own design work.

“We would need show posters," he said. "So I would just start doing them. Looking back, they still weren’t very good.”

Despite his humble self-assessment, Bolotin has moved from pencil drawings of the covers of Montell Jordan and Boyz II Men albums to creating show posters for esteemed musicians ranging from local hero Ben Gibbard to punk rock legends, The Descendents.

Recently he created a poster for a Standing Rock legal defense benefit show hosted by Gibbard.

“He and I had known each other for a while and I just happened to email him after I devised a plan to offer design services to fundraisers to try to raise money for different organizations," said Bolotin. "He was the first person I emailed and coincidentally he was booking this show.”

Besides concert and benefit art, you can also find him working on projects with filmmakers, local eateries, and Microsoft.

But beyond one-off projects, Bolotin’s illustrations also grace a successful line of turntable slipmats, Porchlight merchandise, and prints of his favorite themes — think baseball and mid-century design. In 2013, he also opened a Northwest-inspired online retail shop, Close By, where there’s an in-house line of beanies, candles, and enamel pins, as well as carefully curated goods from other makers and vintage finds.

While he’s certainly got his hands full, he finds ways to also promote the work of other artists in the community. The walls of Porchlight host rotating art shows that often sell out.

“There’s a submission process but all the shows are two months long so a year fills up with six shows. Right now there are no submissions because it's all booked up.” He also goes out of his way to email artists he likes about hanging stuff, whether prints or originals, in the shop. Eight years into the art shows and he can count on one hand the shows that haven’t sold.

His tastes—and his ability to know what others will like—also come across via the tiny Porchlight Records label. “It’s hard to find the right fit of someone that’s in a band that’s small enough they’d want to work with a label this small and that I like enough,” he says, listing a few factors that play into the select releases the label puts out. But for the vinyl he carries in the store, “it’s a combination of the stuff that I really like and that I think other people will like,” which includes everything from big indie releases to small punk records.

How does he do it all? The chalkboard method. “I just have chalkboard lists, paper lists, phone lists, phone calendars,” says Bolotin, “Even when I was able to hire my first employee, I was still working about 65 hours a week. I’m in the shop a lot less, but the illustration stuff and things I do at home, they don’t really feel like work.”

Asked if there are any lessons he’d share, Bolotin says he generally tells people to make sure that they pay their employees and taxes before essentially anything else. But he also encourages people to take classes.

“You don’t have to be a photographer, but just be better in the way that it applies to your business. Design, layout, accounting, they’re all important additions to how to operate the actual business.”

This jack-of-all-trades attitude, and his willingness to learn, has led Bolotin to his current status as a neighborhood anchor in a drastically changing city, where he’s turned Porchlight into a safe haven.

“Obviously I like small businesses,” he opines, “I like people that are into the arts and I think when there's a big influx of people moving in for more corporate jobs, people feel like they're being personally and financially attacked. I think, realistically, spending money from a corporate job at small businesses is one of the best things that you can do. Overall, if anyone is nice and respectful and a reasonable human being, then it’s going to work.”

Probably a good rule of thumb for living in general.