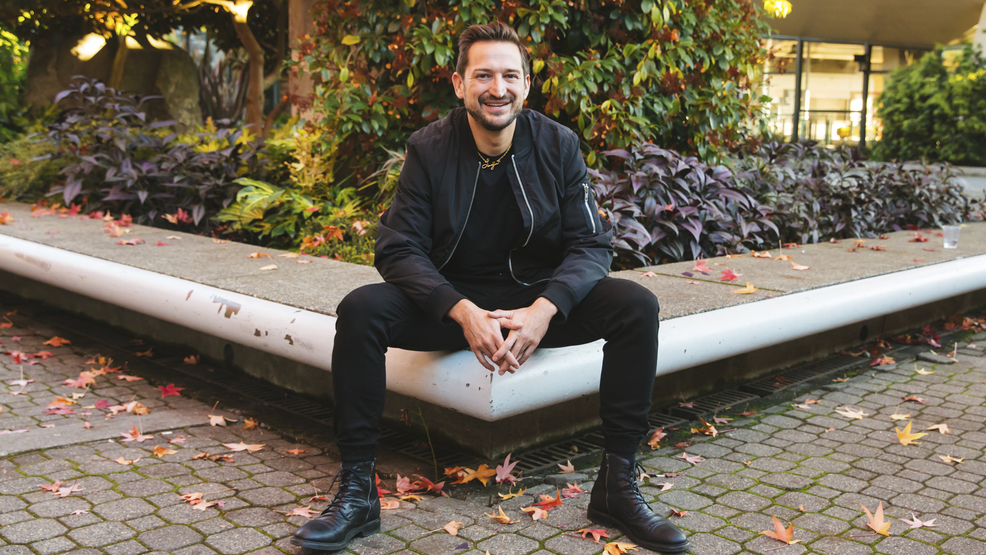 Whether he’s scouting up-and-coming bands or helping get nonprofits on the airwaves, after 15 years in Seattle, Skyler Locatelli has plenty to do with that buzz in your ear, and he wouldn’t have it any other way.

A co-founder of local independent label, Freakout Records, Locatelli studied business management at Colorado Mesa University, where he first immersed himself in the industry.

“I’ve always been super passionate about music,” he said. “I hosted my own show on the school’s radio station for a few years before becoming the station’s electronic music director.“

Moving to Seattle after college, Locatelli says he was “really kind of starving for a community-based music experience.” He found that first by simply going to shows.

“I started meeting people and I was DJ-ing a lot.” And he started traveling the country for shows. “It’s always been there for me as a sort of saving grace in a crazy world we live in. You can always find community, find friends that are gonna bond over music.”

With newfound community in mind, Locatelli had an idea.

“I’ve always been fascinated by psychedelic rock music,” he said, of one of his earliest forays into event production. “I approached Scott Giampino, longtime talent buyer at The Triple Door to produce a Seattle psychedelic rock festival.” While his Hypnoticon Festival lasted only two years, Locatelli had caught the bug.

“I was telling Guy I was interested in doing a Hypnoticon at Neumos, and that didn't work out,” said Locatelli, “But he was like, ‘Hey, I'm doing my festival, the Psychedelic Holiday Freakout, do you wanna help out with that?’”

That was 2015, and after pitching in with the festival, the guys took things a step further. “We sat down, he and I, and Ian Cunningham,” said Locatelli. “We were like, ‘what about a record label?’ Guy was already putting out music under a different name, but we took the name from the festival and decided to create Freakout Records.”

“Our first major vinyl release was with Smokey Brights,” he said, of the local rockers whose bio describes their sound as “a stoney blend of Northwest rock and roll and razor-sharp disco grooves.” The label has only grown from there. “We’ve put out almost 20 records since 2016,” said Locatelli. “And we continue to build the festival, which has definitely helped put the label on the map.”

“Things have grown a lot over the years,” said Locatelli, rattling off a number of other festivals they’ve been a part of, curating Freakout lineups across the country. “We did our first South by Southwest showcase last year. And we've been involved in Treefort Music Fest for two years. Our biggest mission is really to support emerging talent, with a strong focus on the northwest,” he said. “But we've definitely worked with some bands outside of this area as well.”

This year’s sixth-annual Freakout Festival, is headed back to Ballard after an experimental stint in Capitol Hill. “This year we have eight venues and over 50 artists, and we brought in some bands from Mexico, the East Coast, and California. We're trying to kinda spread the love and scope,” said Locatelli, of organizing the two-day fest.

On November 16th and 17th, you can find everything from hip-hop artists and psychedelic rockers to Americana singers and local punk bands. “We figured out that Ballard is a perfect community for what we're doing,” said Locatelli. “People just walk down the street and go into the venues like, ‘What's going on here,’ and we've also started bringing in outside curators, as a way to engage the community and get more people involved.”

This year, that community includes Stas from KEXP’s Street Sounds, the Black Constellation crew, the Bay Area’s fem-forward Sea Witch Productions with a bill that boasts all female rockers, and more.

“We have multiple all-ages stages this year,” said Locatelli. “And our mission is kind of ‘let’s mix it up.’ Ultimately I want you to go into an experience in each venue and just feel like it’s a rad bill.”

But working with the community extends beyond the reach of Freakout Festival for Locatelli, who also holds down a 9-to-5 in business development at KEXP. “My background is in business and relationships, and my role there is essentially to work with businesses that support KEXP through marketing campaigns, sponsorships, and programming. It’s an ever-expanding job description and we all wear a lot of hats.”

“You don’t think about it,” he said, “But KEXP started this thing in Seattle that is reaching so far.” The station’s unique draw? For both listeners and brands, Locatelli attributes it to the station’s unique programming. “We’re constantly innovating, trying to expose people to new music.”

“My worlds definitely collide a lot,” he acknowledged. “And at Freakout, I want to give the opportunity to emerging bands to do opening slots or look at things from a little more of a diverse lens and try and hit some under-served communities. That's definitely a mission going forward, from a festival standpoint especially, to really make sure that we have a solidly diverse lineup.”

It’s a topic on the tips of a lot of industry tongues, too. How do we make sure that more people are represented on festival and record label lineups? “I think that you can see beyond race, gender, and all of that through music and combine people to have a greater social impact," he said.

“There's a lot more work that needs to be done on that, and I've had a lot of discussions with local people about creating some new platforms or discussion panels where we're talking about sexual harassment in the music industry or making sure that we are hitting under-served communities," he said.

And with thousands of new workers flooding Seattle, Locatelli is on the hunt for ways to get them engaged. “I feel that there's always been a little bit of a disconnect from business to artists to venue, these pockets of cool things happening,” he said. “I don’t have the answer, but how can we reach those people and engage with those people and have conversations about the cultural musical history here?”

Ultimately, Locatelli says he wants to, “create a vibe where you come to a Freakout show because it's a Freakout show, and you know you're gonna have a great experience no matter who you see.” And he thinks Freakout Festival is a perfect opportunity to make a larger stamp within the community. “I don't know if we're quite there yet, but that's kind of the goal for me.”

What advice would Locatelli give to artists trying to get their foot in the door? “I think just being really humble is first and foremost the most important thing,” he says. “And keep writing, keep making music, do something to stand out. Don’t get discouraged. And be polite when you reach out to people. Be a team player in the community and do it for your love of it, not just because you want to be famous or rich.”

It’s sage advice for both artist and those supporting them. And ultimately, Locatelli just wants to “see us creating a safe place and more cohesive music community.” And he’s certainly doing his part.