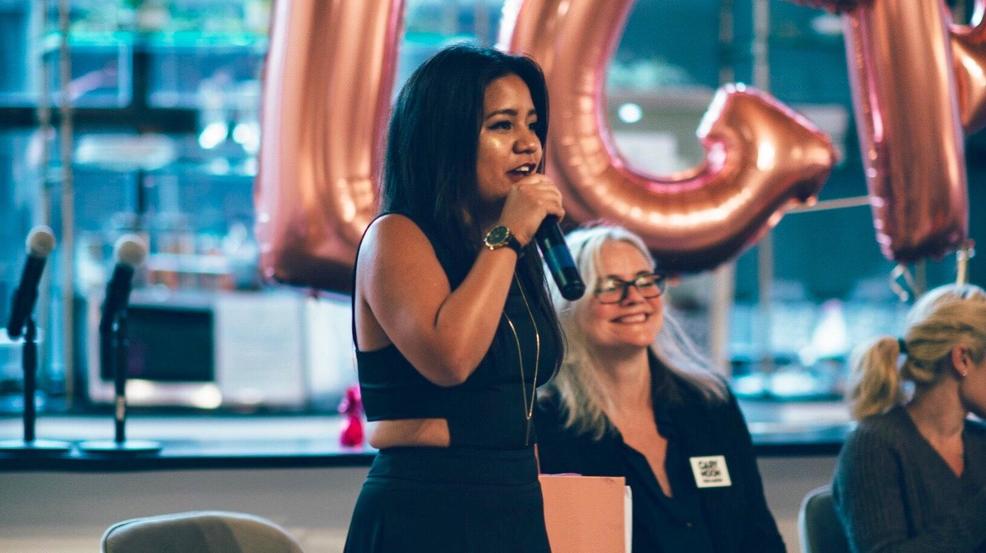 While this Honolulu native may have only been in Seattle for five years, she has quickly implanted herself in the midst of the Seattle business boom with one clear vision in mind: advocating for Seattle women in business and giving them the tools to ask for what they want (Image: Agnieszka Kownacka Everett).
SEE MORE

While this Honolulu native may have only been in Seattle for five years, she has quickly implanted herself in the midst of the Seattle business boom with one clear vision in mind: advocating for Seattle women in business and giving them the tools to ask for what they want.

A particular passion of hers is teaching women about negotiation, a skill that she learned early in life from her great-grandmother.

“My great-grandmother was a Chinese immigrant and packed pineapple for 10 cents an hour at the Dole Cannery after Pearl Harbor happened," said Quiamno. "She saw that pineapple factories were competing with sugar cane factories for workers, so she made a deal."

Her grandmother told her bosses that if they gave her a raise to 12 cents an hour, she would get more Chinese immigrants like herself to come work in the factory - and grandma delivered.

"So because of that, I grew up with this example of pay equity, advocacy, and negotiation," she said. "It was just part of how I was raised."

From that background grew a desire to use her passion for communication, advocacy, and empowering women.

“I learned from my upbringing that nobody is going to take care of you,” she said. “My family taught me that I had a strong community supporting me, but that I was in charge of my future. It taught me to set boundaries, set goals, and fight for what you want. As a woman and as a woman of color, that’s going to be challenging.”

The way Quiamno so quickly cemented herself as a force in the world of Seattle business is impressive, but she insists that it’s simpler than it seems from the outside.

“I understand how hard it is, but right away, build a community for yourself. For me, I just took a step back and thought - I am this woman," she said. "I get where they are, so what do I want to see? And I just started programming these events.”

She's created dozens of events for big names in networking like Ladies Get Paid and Female Founders Alliance, both organizations that champion the causes she is passionate about.

“I always recommend that we think about what you can bring to the table, what value you can add. This is how I developed myself in Seattle. I built a community, built my value, and then saw what I could offer up to the women around me.”

Quiamno is unafraid to acknowledge her talents and use them to help the community around her. But she's not operating in a bubble, and credits a huge part of where she is today to the women who helped get her to that point.

“I knew that I was good at marketing and business from a young age and had a passion for it, but a big question I had was figuring out what sector that would be best for," she said. "Luckily I got an internship from a friend's mom who was a VP of advertising in Hawaii and offered me some guidance. She began mentoring me and it set such a high standard for me. Here was this white woman who understood how hard it is to get into the advertising industry, and she was opening the door for me."

Quiamno recognizes that seeking mentorship can be intimidating, and suggested framing it from a different perspective than the traditional coffee date can you give me some career advice model.

“The people that you want to mentor you are busy. If you are going to reach out, offer them something. Don’t just ask to take them for coffee,” she laughs. “Show them what value you can bring to the work they’re doing - so that it’s a trade. Ask what you can do to support them. Invite all of your college friends to their events on social media. Show up and take pictures of them talking on your phone so they can use that for promotion. Pinpoint your talents, think about what you can do and what they might need."

Quiamno also mentions that there’s nothing slimy about this because it’s business. People will be so much more likely to mentor you if you are helping them in some way.

"Obviously we want to be authentic, but get things done also. Make things happen,” she said.

This girl boss was inspired to begin leading salary negotiation classes about a year ago. Her classes offer actionable, no-nonsense advice that she’s compiled based on her own experience transitioning through jobs and the experiences of the women around her. Her advice is refreshing.

“Practice getting interrupted! We all practice our pitch, but somebody is going to interrupt you, which you need to practice," she said. "Practice having push back. When you get interrupted is when you get derailed. Being able to prepare for that is crucial to your success for negotiation.”

Though her salary negotiation tips are geared toward females, Quiamno suggests bringing trusted males into the conversation, too, to understand how they negotiate and to try to mirror that behavior.

“Sure, all of us women can talk to each other about how much to make, but we are already making less than the men, so why don’t we start bringing guys in to help us prep with this too? Men are fearless in asking for salaries that women might not even think of, and for being unapologetic about their ask. You shouldn’t feel ashamed. You should never feel bad about wanting to afford to live. Practice your negotiation with a male ally too so that you can get comfortable having these conversations, especially if you’ll be negotiating your salary with a male boss," said Quiamno.

“Right now only two percent of funding goes to female founders. It’s not because women aren’t prepared or doing the right work, they are. And of that two percent only .3 percent - or something crazy - goes to women of color, which is a huge problem. We are working on changing that standard, so that our daughters see more female founders and businesses that are inclusive of women in the future.”

Ultimately it’s the energy of the women in Seattle that inspired Quiamno to grow roots in our rainy city.

“I am excited about the innovative ideas that are being spread here. The women in Seattle are so supportive, it’s addicting. To me, that’s what is so special about Seattle,” she says, with a smile spreading across her face, “there are women that are passionate about making true change. We love Seattle so much that we are working to change it. We are asking the right questions and doing the work to get Seattle to where we want it to be.”