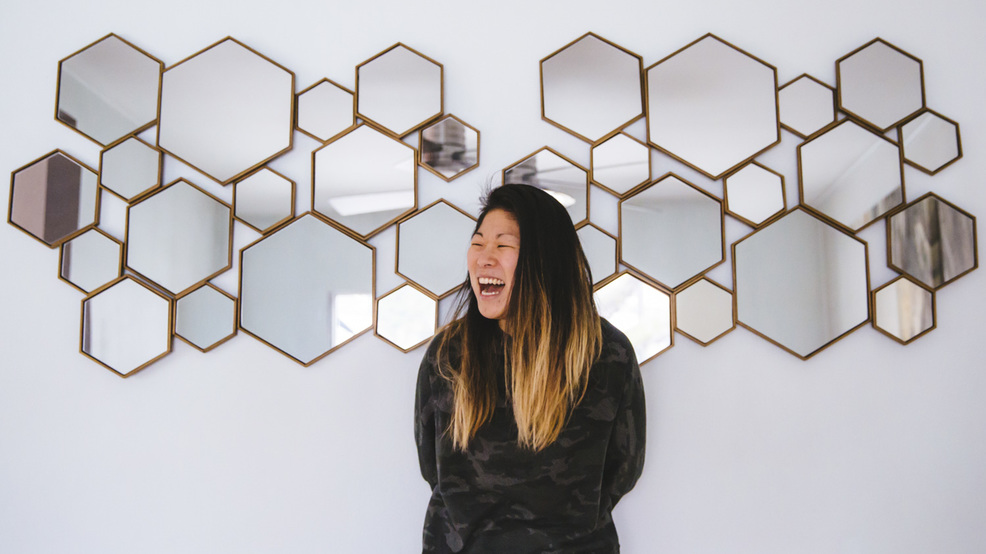 Movers & Shakers: Molly Hawkins is as close as it gets to a real-life unicorn

From snowboarder to podcast host, videographer to digital marketing guru- Molly Hawkins isn’t afraid to follow her instincts, and it's served her well. The founder and creative director of We Are Unicorns - a full-service creative and marketing agency in Fremont - has built quite a name for herself while also creating a platform around accessibility and bringing people together.

Adopted from Korea as a young child, Hawkins grew up, “in a very white, small rural town in southwest Washington,” she recounts. Despite efforts to integrate - Hawkins joined all the clubs, was president of her class, homecoming queen - there was always something missing.

“I've explored and exhausted every possible thing,” she said. “I went through a period where I'm like, ‘Wow, maybe I'm gay,’ or, ‘Maybe I'm this.’ I mean, whatever it was, I looked in the mirror and I didn't recognize the person, but also, I saw a white person.”

In the search to find herself, though, Hawkins also found community.

“I had the luxury of trying," she said. "My parents were perfectly middle-class and good at saving money, so though I didn't get the cool new Starter jacket or Doc Martens, they educated me and gave me enough motivation to just try things.”

Whether that was hooking up VCRs, old camcorders, and CD players with her brother to make their own music and snowboard videos or a plan to become the next Connie Chung - “To me, at that time,” she laughs, “that was the only creative thing that I saw based on how my parents said I needed a career and savings and a house.” Hawkins followed her interests wherever they led, including into event marketing and radio intern.

“About 2004 or 2005 when e-commerce was really starting to become a thing, social media was just starting to be utilized for marketing,” she explains. “I just really wanted to find a way to connect.”

An ad for a job at evo would turn out to be just the launching pad Hawkins needed.

“We built a digital ecosystem,” she recalls with fondness. "But for me, the exciting part was working with artists and figuring out how to make it authentic.”

Hawkins took her experience, knowledge, passion, and ambition and hit the ground running....

And it paid off.

Through evo, she helped brands with strategy and storytelling, and after seven years there, bridged the gap into consulting on her own.

“I left evo and built a business plan for We Are Unicorns,” she said of the agency she founded in 2011. “What I realized is that marketing can be so many things to people. It's such a squishy term. It's about connecting ideas and people. I knew what I was good at and that I could build something substantial around that.”

But it turns out Hawkins is good at a lot of things. At Unicorns, she has cultivated a full-service creative and marketing agency unbound by any one particular channel, industry, or platform.

“I hate being put in a box,” said Hawkins, "First and foremost, I want to create a space that helps people build their businesses, their dreams, their ideas, and to be able to connect creators and makers.” Thus far, she’s seen success.

“Somehow, some way, people believe in me and give me work,” she says. “I am nobody in the grand scheme of things. I have, from day one, gotten all referral business and I think it’s personality. I think because I’m so willing to tell people what I think, I have nothing to lose, and all I have is good intentions. I think that’s very rare in the agency world.”

As a kid, Hawkins was always creating excuses to have parties with family, making invitations and menus and gathering a crowd. This inherent yearning for community has remained a theme of her life, and her work.

“If I see a huge void,” she says, “where people are looking for the same thing, how do I bring those two together?”

While Unicorns does have their own space, Hawkins likes to be “out in the field” making connections.

“I don't know how many times I've been in a coffee shop working with my team or talking to clients and someone will tap me on the shoulder and be like, ‘I don't know what you were just talking about, but I think I need to learn about it. Let's chat. I'll buy you a coffee.’ I love that and I love talking about what we're doing, and I hate being trapped in a box.”

2017, though, seemed to be telling Hawkins something. Early in the year, while questioning the future of her business, a snowboarding accident while on vacation in Japan sent her to the hospital with a broken leg.

“I was having growing pains at this point, and all of that happened at about the time where I should have been focused on my business, but really, I believe it was the universe telling me to slow down and reprioritize. In that process of rehabilitation, you have to be willing to listen,” ponders Hawkins. “I've done the best work I've ever done in the last six months. I've had to change in order to do things that I need to do.”

Hard lessons often bear opportunity, and Hawkins has continued to grow and find ways to contribute back to her chosen community, finding ways to help creators and collaborators in bigger ways.

“I couldn't have built this business without the help of others,” she says, “and what I've realized is that it's more fun when you're doing it with people anyways.”

Whether it’s connecting a startup to the designers and manufacturers they need to get off the ground or hooking up major brands with independent content creators, Hawkins has the connections at her fingertips and isn’t afraid to share them. The one piece of advice she has for creatives?

“Oh, man. Drop the ego, be vulnerable, collaborate, and then also, be willing to ask for help,” she says. “When I started Unicorns, there were a lot of things I needed to learn. Being willing to listen and learn from other people has helped me really tap into my creative potential.”

She also found mentors and books and asked questions.

“I put together kind of my own curriculum.” And now the goal is to share that, via what Hawkins refers to as a “helping platform.” Unicorns has an internship program, too, that she gushes about. “Half of our interns have ended up getting hired on. It’s so fun to work with them and she what they’re learning and just throw them into the trenches.”

“I didn't go to business school. I didn't go to design school, film school, photography, none of it,” says Hawkins. “I taught myself Photoshop, and I taught myself how to use a camera and edit. I've had to learn everything and trip on myself along the way, but because I'm not bound by the conventional norms and process and workflow and stigmas, I feel like I kind of have had an advantage.”

Doing what feels right seems to be working for Hawkins, who believes in the connection between head and heart. “The point at which I started seeing success in my career was when I stopped listening to people and undoing everything I thought I knew about the world and started creating from my heart.”

“I've been trying to build a space that literally opens my doors to anybody,” she says. “Where people can come in and interact with all the people that I love and am inspired by in the city. It sounds all over the place and my mom is still wondering what the hell I am doing, but it makes sense to me.”

“There's not a day that goes by that I don't think that I'm the luckiest person on this planet. I believe that you make your luck, though, that energy and the things that you do in this world reverberate.”